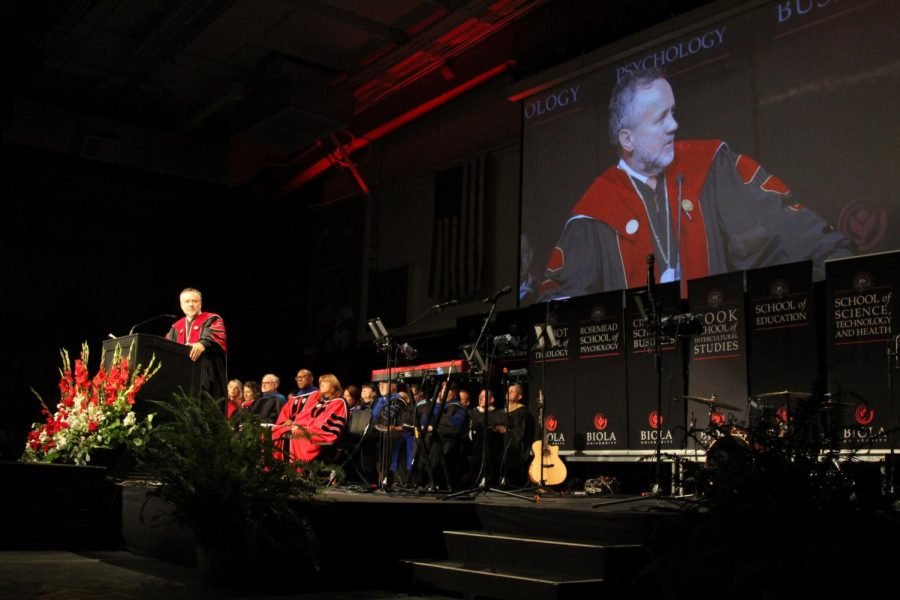 For students in a social-media driven world, Spiritual Development is proposing a different way to connect: With. The single word is the theme for chapels in the new school year, which speakers will use to highlight the importance of relationships.
MEANING AND ORIGIN
Assistant dean of chapels and worship Mike Ahn says the theme can be used to explore multiple areas of relationship: with God, with small groups, with neighbors and more.

“It feels incomplete but I think you can fill in the blanks with a lot of things,” he said. “So for us at Spiritual Development, we kind of look at it as ‘with one.’ So that’s like, with God or maybe one-on-one. With many, so that’s kind of like in a small group or classroom, something like that, or even in a chapel setting… [And then there is] with all or with neighbor.”
RESEARCH REVEALS STUDENT ANXIETY
Spiritual Development selected the theme to respond to a sense of loneliness in the community. Records from Pastoral Care and dean of Student Wellness Lisa Igram’s research on emotional well-being revealed that Biola students are now more anxious and more lonely than the national average.

“And I think for our student audience, we’re recognizing that there is a disconnect happening actually,” Ahn said. “We’re all connected through social media and our computers and stuff like that, but we just feel very lonely or alone even. So what we wanted to do is create something that is saying, ‘No no, let’s be together in this and let’s be a little bit more with each other but also with God.’”
TECHNOLOGY REDUCTION
One reason behind that loneliness is students’ use—and overuse—of technology, which Ahn says creates an illusion of connectedness. This year, Spiritual Development is increasingly encouraging students to put away cellphones in chapel.

“We’re going to try to invite students into a tech-free zone,” he explained. “We want students to open to God, so we’re going to ask them to close their devices.

According to Ahn, that goal serves the chapel theme by pushing students to be engaged as they worship together.

“Believe it or not… people were really passionate about enforcing some sort of like no-phone zone,” he said. “They say it’s super distracting. They say it’s really hard for them to focus when the person next to them is watching Netflix or something.”
CHAPEL GOALS
Ahn says he hopes the chapels can encourage students to be intentional with their conversations, viewing relationships by their quality instead of quantity.

Ahn says he hopes the chapel theme will begin to manifest in conversations between students.

“Practically, it just means we start more intentional conversations with people,” he said. “It really means like, ‘I’m going to purposely ask how this person is doing rather than just wait for them to come talk to me.’ I think that’s a huge win, practically.”