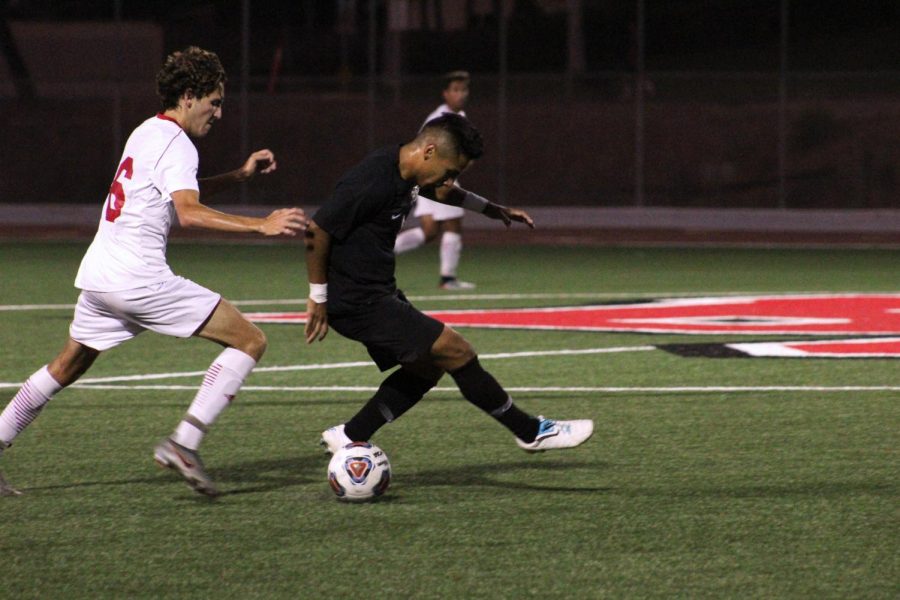 Freshman midfielder Chad Sinclair attempts to steal the ball from his opponent, during the game against California State University San Marcos on September 11, 2019.

Men’s soccer collected their first home win under the lights against California State University, San Marcos Cougars on Wednesday. Midway through the match, two freshman Eagles both snuck a goal past the Cougars goalkeeper, earning their first victory of the season by a final score of 2-0.

The first half proved slow for the Eagles as they came out feverishly on defense. However, they only attempted two shots during this time. The closest shot attempt came with five minutes left in the half, as freshman midfielder Jack Kilgallon kicked low and left to the goal which was later saved by the Cougars goalkeeper.

Two minutes later, the Eagles got the crowd on their feet with their first goal of the game. Junior forward Jack MacDonald set the ball up for freshman midfielder Dylan Memory, who kicked the ball into the lower right side of the goal.

“I just thought, ‘Get to an area where I can pick something up. Just find the ball somewhere, make something happen,’” Memory said.

After halftime, the Eagles picked up where they left off by scoring their second goal of the game with two assists. Senior forward Hunter Finnegan crossed to the right side outside of the box to freshman midfielder Chad Sinclair, which deflected to freshman defender Owen Setran and he quickly kicked the ball to the lower right of the goal for the Eagles.

“I was just trying to get the shot off quick and keep it low,” Setran said. “Second half, we came out, putting a couple hard tackles, kind of controlled the game a little bit.”

The Eagles attempted three more shots before the Cougars would attempt their final shot in the final seconds of the game. After a foul from senior defender Jake Munivez, the Cougars were awarded an indirect kick and they took the shot straight to the goal. The goal was counted but was later recalled by officials because the Cougars did not allow another player to assist the goal. This brought the score back to 2-0 as the Eagles grabbed their first blowout win.

“We tried to put them under pressure and at times they were putting our backs under pressure. I think the effort all the way around was our best by far,” head coach Todd Elkins said. “The guys came out humbled by that of recognizing that we gotta go to work, we gotta work hard, we gotta fight for everything.”

The Cougars kept Eagles’ freshman goalkeeper JD Gunn on his feet. He defended 15 shots towards the goal and collected five saves throughout the match.

The Eagles moved to 1-2 in non-conference matches and will look for a second win at the University of California, San Diego on Saturday at 7 p.m.