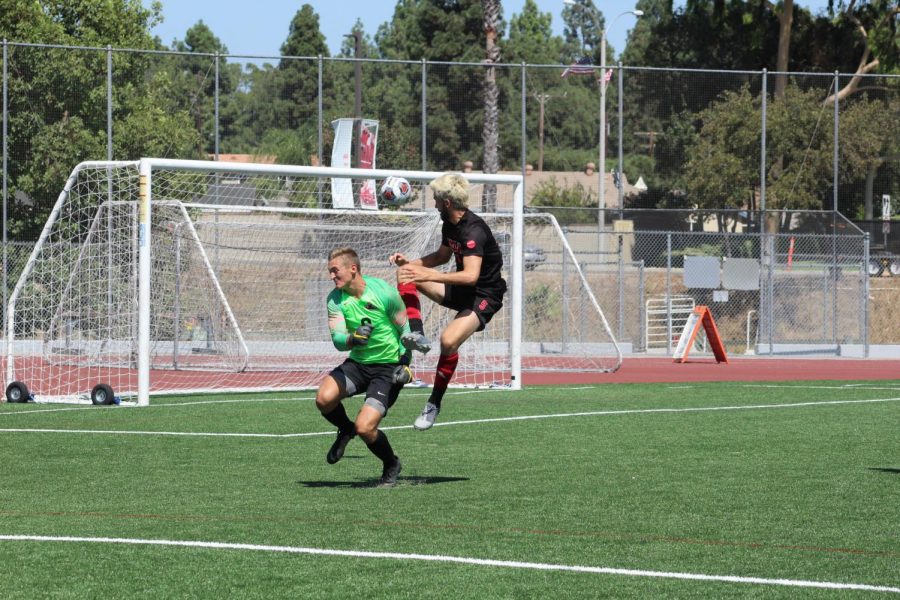 Photo By Marlena Lang // THE CHIMES

Men’s soccer kicked off their first home non-conference game in a close matchup against the Northwest Nazarene University Nighthawks on Saturday. The Eagles scored twice in the second half and worked to defend the goal but fell short after a three-point sweep from NNU, to end with a final score of 3-2.

In the first half, the Eagles collectively attempted six shots to the goal and kicked eight shots. The game was slow until the end of the first half when NNU attempted two shots towards goal but fell short at the buzzer.

Reeves grabbed his second assist 26 seconds later after chasing down an aerial pass and shooting the ball to senior forward Hunter Finnegan, looping the ball over the Nighthawks goalkeeper for a goal.

“We had some opportunities that we didn’t finish but the game was a learning lesson for us and we’re going to go through it. We will clean this up,” Macdonald said.

After this, the Nighthawks ran out of the gates with three goals, putting the Eagles in the dark the rest of the match. The first came at 69:02 by a Nighthawk attempting a shot that was blocked by junior goalkeeper Alex Muir moving outside of the box. The ball landed towards another Nighthawk which put away the ball into the right corner of the goal for their first point.

A few minutes later, the second goal from the Nighthawks came from a penalty kick after a foul was called on senior defender Alejandro Pelayo. The final goal of the game from NNU came as a shot over Muir’s hands in the last five minutes, ending the game at 3-2.

“We still had the extra energy of being at home at times. I think we knew that 2-0 lead doesn’t mean that we are going to win this game,” said head coach Todd Elkins.

Overall, Muir collected three saves in the second half of the game and the Eagles attempted 10 shots to the goal.

The loss moved the Eagles to 0-2 in non-conference play. They will look for a win against California State University San Marcos at Al Barbour Field on Sept. 11 at 7 p.m.