Senior Colie Martin scored the lone goal for the Eagles in loss. 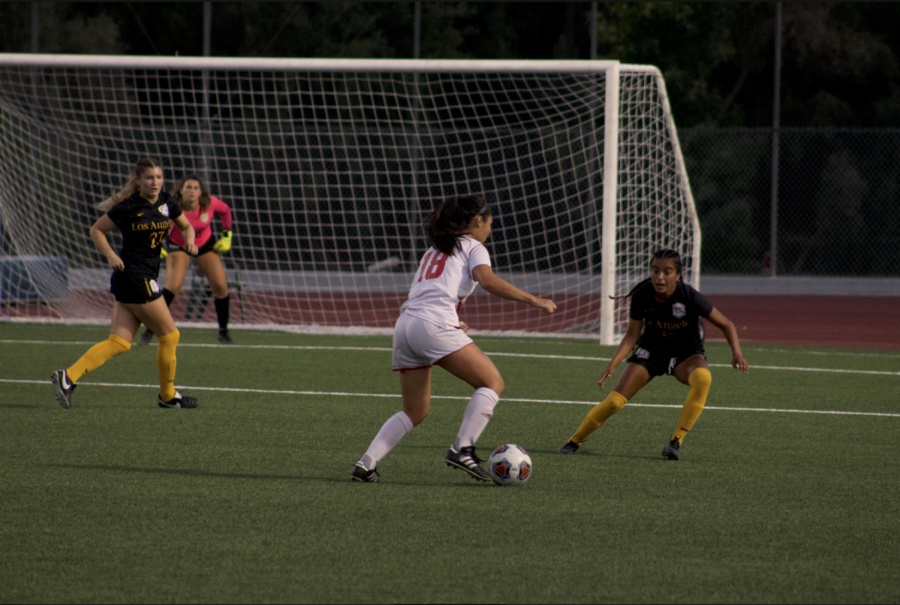 Biola women’s soccer opened their NCAA Division II season with a 2-1 loss at home against California State University, Los Angeles on Thursday at 7 p.m.
EAGLES LEAD IN FIRST HALF
CSULA started the game pressing Biola’s defense, yet shots came from both sides for the first 25 minutes. With 20 minutes left in the half, Biola’s defense created an overlap down the right wing and the ball was played through to freshman forward Mason Stansberry. Stansberry’s left-footed shot dipped over the crossbar. The Eagles won the ball off the goal kick and tapped it off a CSULA defender for a corner kick. Senior defender Colie Martin scored off the cross in the box to put the Eagles up 1-0.

“I am excited that the minutes that I’m playing, I’m going to be able to learn from,” Stansberry said.

Martin stepped to the half-line and intercepted a pass with eight minutes left on the clock. Dribbling past two defenders, she took a shot from 20 yards out and hit the crossbar. Biola continued to pressure the Golden Eagles with a shot from freshman midfielder Halie Jamir and closed out the half on top.
CSULA FINISHES STRONG
The Golden Eagles started out the second half with high energy, putting a cross in and CSULA crushed the ball into the net on a half volley to tie the game 1-1. Biola fought back, earning a foul in their opponents half. Senior defender Madyson Brown took the free kick and narrowly missed a shot on goal. Early on in the second half, a Golden Eagle cut through traffic and broke free, scoring in the opposite corner to make the score 2-1 CSULA.

The Eagles continued to press and play rough on both sides. Biola put three shots on the board in the second half, but none good enough to tie up the game, leading to CSULA’s victory.

“It was a great opponent for us to open up with, a team that is expected to do well in their conference. It was a great learning experience for us,” head coach Erin Brunelle said.

The Eagles will be back in action against UC San Diego at Triton Soccer Stadium on Saturday at 4:30 p.m.