Gun violence is the result of a violent culture 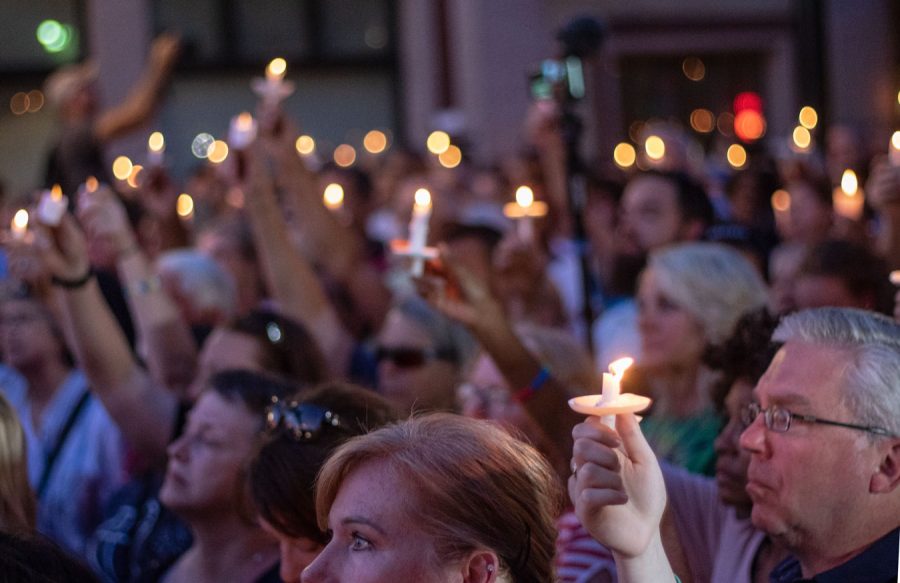 Residents of Dayton, Ohio hold a vigil for victims of the Dayton shooting that occurred last August.

Until the U.S. is willing to address the deeper issues of violence and hatred rooted in our culture, America will continue to experience gun violence. Odessa and Midland show us that.
GUN VIOLENCE IN THE U.S.
In America, mass shootings have occurred in elementary schools, universities, movie theaters, stores and places of worship, impacting people of all backgrounds, ethnicities, age groups and genders. No one in the U.S. is ignorant of the fear of an active shooter. Places of education and work administer training and drills to prepare for threats of such violence. In the U.S., mothers go home to empty rooms because their innocent children’s lives were taken away while they were at school.

According to the Gun Violence Archive, as of Sept. 1 there were 283 incidents involving gun violence in the U.S., even though Sept. 1 is only the 244th day of the year. On Aug. 3, a shooting at WalMart in El Paso, Texas left 22 people killed and at least 24 injured. On Aug. 4, in the historic district of Dayton, Ohio, a gunman killed nine and injured 27. Most recently, the drive-by shooting in Odessa and Midland left many grieving the loss of their loved ones.
DESENSITIZED VIOLENCE AND UNBRIDLED HATRED
After mass shootings, politicians engage in predictable conversations about the need to outlaw assault weapons and ammunition, as Americans call for stricter legislation on guns. However, while politicians cross off gun reform from their to-do lists and Americans feel satisfied by their Twitter responses addressing gun control, America continues to experience gun violence nearly every day. By repeating conversations about gun reform, the U.S. does not address deep issues of violence in American culture. Violence is dangerous, but violence with a gun is deadly.

Every day people are exposed to violence. The U.S. does not promote the sanctity of life. Rather, American culture devalues human life. Violent video games, television shows and movies are advertised and consumed by Americans every day, influencing people from the time they are children. According to Psychology Today, it is estimated that before the time the average child becomes an adult in the U.S., they are estimated to have seen 16,000 on-screen assassinations via television. Furthermore, mass media captures violent crime in their news headlines, desensitizing people to violence.

In addition to mass media and violent entertainment, the U.S. is increasingly devaluing the sanctity of life. Hating people of different backgrounds is justified. Abortion is justified. War is justified. Violence is justified. In a self-focused culture, violence is justified because people are ignorant of how their actions impact others. In El Paso, the gunman was motivated by racism and hatred.
SOLUTION
While gun reform appears to resolve the issue of placing guns in the hands of people who intend to harm others, it is only a surface-level solution. While people gravitate toward gun control as a viable answer, it fails to address issues of justifying violence in American culture. It fails to address the issues of racism and hatred. As a nation, the U.S has made a conscious decision to turn away from biblical principles that greatly influenced the founding of this nation.

Along with considering gun reform, the U.S. needs to discourage the advertisement of violence and encourage the sanctity of life through stopping the desensitization of murder and violence through media and entertainment. The U.S. needs to stop justifying violent policies and actions, such as abortion and war. Instead of encouraging a culture that focuses on self-satisfaction without regard to how violent actions hurt others, it is crucial to encourage empathy and selflessness.

As Christians, we have the opportunity to lead the way and be a light in this nation by praying for our country. We can love and respect others. We can raise children and families that are not desensitized to violence, but rather understand that all people are created by God for a reason and a purpose. By focusing on thoughts that are “true, honorable, just, pure, lovely, commendable, excellent and worthy of praise,” as it says in Philipians 4:8, we can promote the value of human life and discourage a violent culture.