Business professor tunes his guitar to the heart of his students

Nick Sherwin leads classroom lectures during the week so he can chase his passion of music on the weekends. 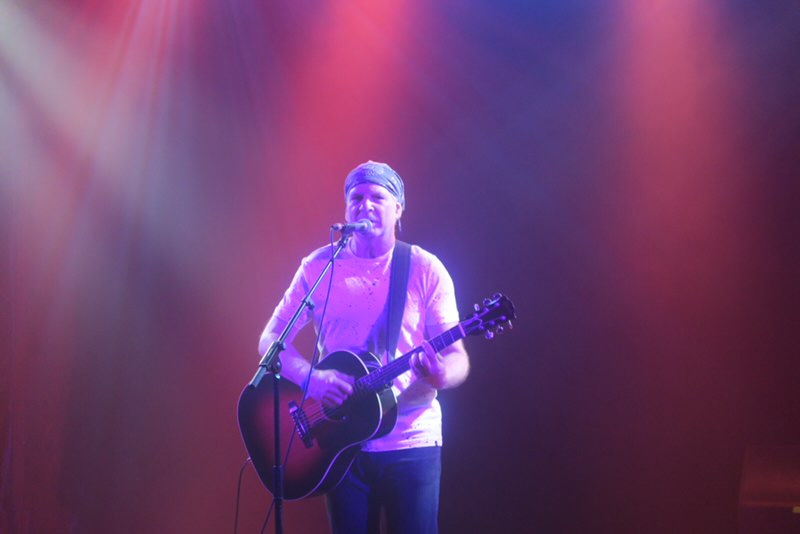 Nick Sherwin is more than just an associate professor of management in the Crowell School of Business––he is a lover and a fighter of good music.

“My music is absolutely the story of my life in a lot of ways and if you start listening to a lot of my music, you’ll hear someone very openly singing about his sin, or his relationship with his father, or whatever it might be,” Sherwin said.
THE BEGINNING OF A ROCKSTAR LIFE
Sherwin has played with all of the greats, or at least their children, including Paul McCartney’s son, James Taylor’s son and Lisa Maria, Elvis’ daughter.

Since his middle school years, music has been Sherwin’s real passion. After attending a backyard bash in his youth, his mother surprised him with a simple nylon string guitar and a couple of guitar lessons, and he has loved music ever since.

“For the longest time, my brother had two or three friends who were guitar players and when they would come over, I would say ‘Show me how to play “Stairway to Heaven,” Show me how to play everything.’”
CURVE BALL NO ONE EXPECTED
Leading into his senior year of high school, Sherwin got into a car accident that resulted in his entire right arm being paralyzed.

As a star baseball player, Sherwin was guaranteed an athletic scholarship for University of Southern California. He ended up in a terrible car accident, the summer before his senior year. What had seemed like the end was only the beginning.
NEW LEASE ON LIFE
About two years after the accident, Sherwin began to regain feeling in his arm again. Although his career in baseball had ended, his career in music had taken off after joining a band by the name of “Finesse.”

The name of their band aligned with their tactics of business as well—the showbiz parents of some of the band members would pay for limousines or venue bookings.

“It was all fluff and no stuff,” Sherwin said.

He recognized that he was in the midst of darkness and he wanted out.
MUSIC AS MINISTRY
Sherwin left his dream of being a rockstar, but the music bug never left.

After leaving the band, Sherwin aggressively climbed the corporate ladder of the business world. He served as vice president at two of the nation’s largest advertising firms as well as president of a video distribution company.

His love of music remained constant through it all, and he would still occasionally find himself performing at a backyard wedding or a downtown venue.

Today, he has released 11 albums in the past five years. While this seems like an illogical feat for someone with a full time job, Sherwin says he is “blessed to have a full time job that is really a part time job with 20 hours a week.”

He has served at Biola as a professor since 1995, and joined as full-time faculty in 2005. One of the many classes that Sherwin teaches is Strategic Management, which is a course designed to combine the various elements of the business school at Biola.

Building deeper bonds with his students this semester, Sherwin saw the opportunity to extend an invitation to his April 12 gig at the Troubadour, a famous night club in West Hollywood, where big names such as Elton John, Guns N’ Roses and Kelly Clarkson have also once played.

“As a professional marketing [professor], if you follow me on social media, you’ll see that I maximize all of the marketing opportunities from my shows where a lot of people wouldn’t,” Sherwin said.

Sherwin comped over 200 tickets to any student interested in attending the performance. In his words, he hoped that this occasion “could be a time to celebrate the hard work put forth by students this semester.”
CONCERT OUTSIDE OF THE CLASSROOM
“I love my students. Teaching was this weird thing that I never planned, never thought about, never thought I was gifted [to do as a career],” Sherwin said.

About five years ago, Biola encouraged professors to share with students their life outside of the classroom to show that students can relate to their professors in ways they may have never thought possible. Like many things in his life, Sherwin delivered.

Sherwin’s performance at the Troubadour drew in a great crowd, as he was also able to show off a couple new songs, some of which include Christian themes, off of his newest album set to debut later this year.

“It’s not too long before you hear what I’m singing and that is really what my ministry has always been.. And I’ll take that any day,” Sherwin said.

Students beamed with proud faces as they saw their professor in a new light, the spotlight of a Hollywood stage.