The Eagles split their second doubleheader against the CUI Eagles. 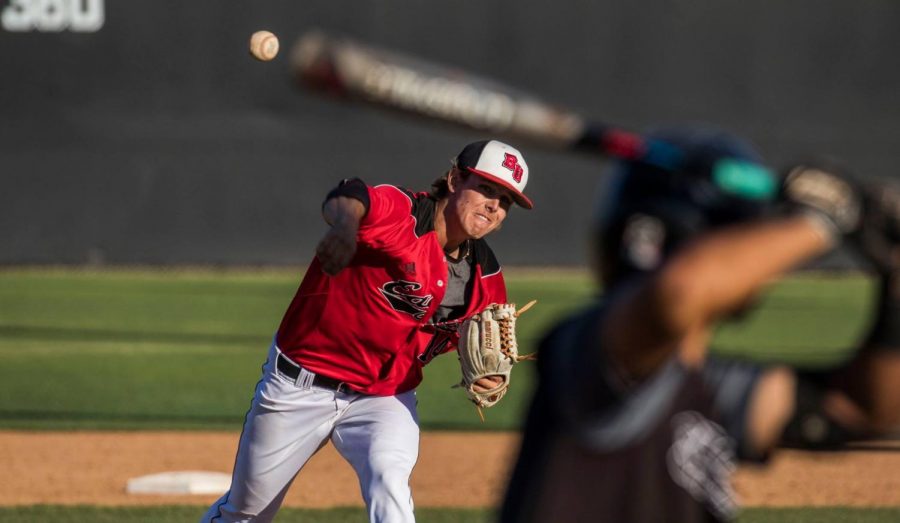 Baseball returned to Irvine, California to take on the Concordia University Eagles in yet another doubleheader on Saturday afternoon. The day started out slow for both teams. CUI walked away with the first win, only scoring one run in total. The Biola Eagles were unable to score any runs at all, losing 1-0. However, the Eagles stepped up and flipped the switch in the second game, winning big, 8-0.
SLUGGISH START
Game one was tough for Biola and was a shockingly low scoring game for both teams. The Eagles were unable to produce any runs, yet the pitching team was supreme. Junior pitcher Kenny Carrillo and freshman pitcher Larson Kindreich combined for zero earned runs and 16 total strikeouts against Concordia.
RULING EAGLES
Game two was a 180 degree flip from the previous game. The Eagles began the second inning with a home run by sophomore first baseman Jackson Collins. Sophomore shortstop Connor Kostecka crossed home plate to bring in another run for his team. Collins remained on fire, striking another homer to right field in the third inning. Senior left fielder Jerron Largusa scored as well, making it a 4-0 game.

Both teams were unable to find runs after Biola’s quick and powerful lead. However, the Eagles took off in the seventh inning, soaring high above Concordia. Sophomore second baseman RobertAnthony Cruz, Largusa and Collins all scored one run each, lifting the Eagles to a 8-0 shutout on CUI’s home turf.

The Eagles will return to action on May 1 at 3 p.m. in a doubleheader against Hawaii Hilo University on Eagle’s Diamond.