The company plans to launch its beta app at the beginning of May. 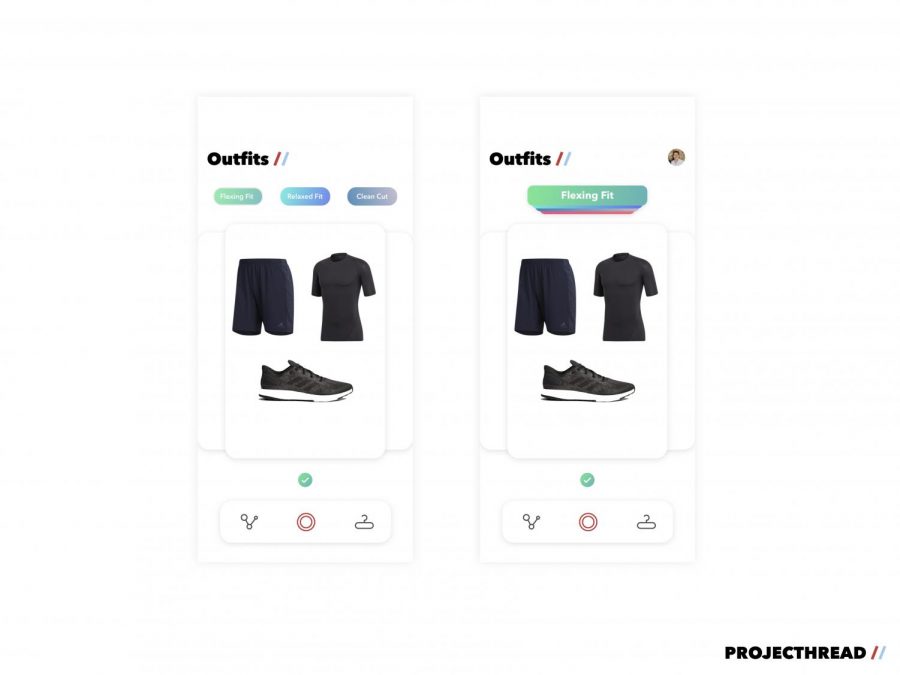 It all started about four years ago, when senior business administration major Anthony Raffa came up with the idea of an app that functions as a virtual closet. Unlike other brands that create outfits based on the clothing available for purchase from their company, PROJECTHREAD remixes users’ existing closet to build daily outfit suggestions.
STEWARDING CLOTHES
The app uses the device’s camera to scan each clothing item. It uses artificial intelligence to figure out the type of items in the photo, such as a tank top, boot or dress for example, as well as its material and brand. So, rather than merely cataloging an article of clothing as a blue shirt, the app’s AI would list a navy blue and white pinstripe blouse, which allows users to see what they actually possess in their closet.

“We want to help people steward their clothes better,” said sophomore business administration major and PROJECTHREAD designer Alex Adamopoulos. “People don’t wear 80% of the clothes that are in their wardrobe and if they think they do, that’s because they have stopped looking at everything else.”

The app creates outfit ideas by categorizing items into “threads” based on the type of clothing and what you would wear with it. For example, a workout ‘thread’ might have running shoes and athletic wear in a “flex fit” category. The app then curates outfits for the user by matching clothing items within a category.
PROBLEM SOLVING
Raffa explained that he has always had a problem-solving mentality. He noticed that most of his clothes went unused and that what he wore actually mattered to him.

“Clothing really communicates something before you even say a word,” Raffa said.

This gave Raffa the idea to start designing and programming an app that would solve this issue. He assembled a team to start the process but lacked an engineer and a designer, which according to Raffa, were two crucial roles for the programming development.

But Raffa continued with the project anyway, with hopes of entering the Biola Startup Competition in 2017. The group included Adamopoulos as the designer and junior business administration major Isaac Lewis as its marketing director. The three began brainstorming color schemes and marketing techniques but kept running into Raffa’s original problem––they still lacked an engineer.

As the marketing director, Lewis then contacted sophomore computer science major Jamison Meyerovitz, who agreed to join the team. The team had intentions of competing in the Startup Competition, but were rejected because their app was yet to be engineered. The team continued to work on the project’s design and final details so that Meyerovitz could start working on the project over the summer. The project took up several hours of the day throughout Meyerovitz’s already busy summer.

“I would go to lifeguarding, then I would take care of the kids… my baby brother and little sister at home, clean up dinner and then I would code really long hours of the night,” Meyerovitz said.

Meyerovitz has coded for more than 800 hours for PROJECTHREAD since he started in May 2018. After several challenges with coding the artificial intelligence for the app, he decided to outsource to adjunct mathematics professor Kevin Cotton for help. Cotton showed Meyerovitz the foundation for the coding that he needed to make the app work. According to Meyerovitz, the app uses a convolution neural network to scan clothing items and organize them into categories, or “threads,” as the team calls them.

The team says they share a love for Biola and are excited to share the app with the community. The group will officially be launching a beta-type app on May 1 by the Bell Tower. The beta version will open the project to feedback from users, so that the team can eventually launch PROJECTHREAD in the app store.