The Eagles power forward will return home to play in the National Basketball League of New Zealand. 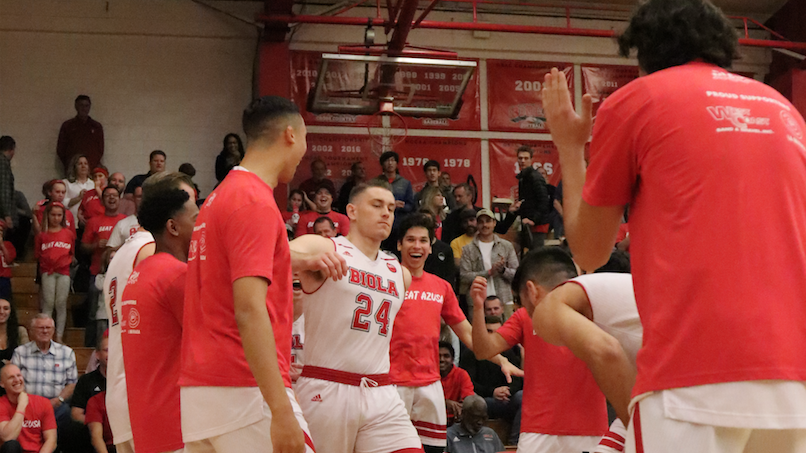 Former men’s basketball forward Alex Talma is headed home to start a career in the National Basketball League of New Zealand. The senior guard has spent the last five years in the United States, the last three as a key rotation player and then starter on the Eagles. Now, he is excited to expand on his athleticism and take his career and competitive nature to the next level.

Talma is joining what he calls a highly competitive, semi-professional basketball team in Christchurch, New Zealand called the Wheeler Motor Company Canterbury Rams, one of nine teams in the NZNBL.

“My goal personally is to have a really good season in this New Zealand league and then re-evaluate and hopefully get into the Australian top-division league, and that will be a really good career,” Talma said. “It’s going to be really awesome, a really good opportunity.”

Talma was a powerful force for Biola, averaging 12.2 points and 8.4 rebounds per game over his three seasons with the Eagles. He led the Eagles with a grand total of 235 rebounds in his final season as an Eagle.

“We will really miss his rebounding and his scoring,” said head coach Dave Holmquist. “He was a great rebounder for us, he was also a very fine scorer. We will miss his quiet leadership and his ability on the court. We are also going to miss his spirit and his attitude. He was somebody that other people liked to play with. His teammates really liked him, all of the coaches really enjoyed coaching him.”
DREAMS BECOME REALITY
Talma was told the news of his signing just three short weeks prior to booking a flight back to New Zealand.

“I was in communication with [Rams] coaches since the beginning of the season, but I didn’t sign anything until after the season. Coaches had known about me from back home and were following my progress and checking in with me, seeing how I was doing,” Talma said.

Talma’s life as a Canterbury Ram will start on April 14. The 2019 all-PacWest honorable mention star was able to tie up his remaining obligations at Biola in order to travel to the other side of the world just a few days before the season opener.

“I’m just excited for a change up, excited to play with some different guys and have some different coaches. Being home is going to be good. I will be in the same city as my parents, that’s what I’m most looking forward to,” Talma said.
A SWEET FAREWELL
Despite finally getting to return home, Talma says it will not easy to leave a place that was called home for half a decade.

“I’ve been in America for five years now. It’s been a huge part of my life. I’ve got a lot of friends and relationships here that I am definitely going to miss,” Talma said. “I’m for sure going to miss Biola, but it is going to be a really good opportunity to go over there. A new team, teammates, coaches, just a different atmosphere. Being back home is going to be great.”

The New Zealand native has made a name for himself in Biola basketball. His character and determination has left lasting impacts on those he worked closely with throughout his collegiate career, including his former head coach.

“There are so many things about Alex that I have come to admire. He grew in his faith while he was here, he was very serious of that,” Holmquist said. “He has been a joy to coach. I think anybody would say he is the type of person that you would love your own son to grow up to be like.”