Biola tops Fresno Pacific University in game one but falls short in the second. 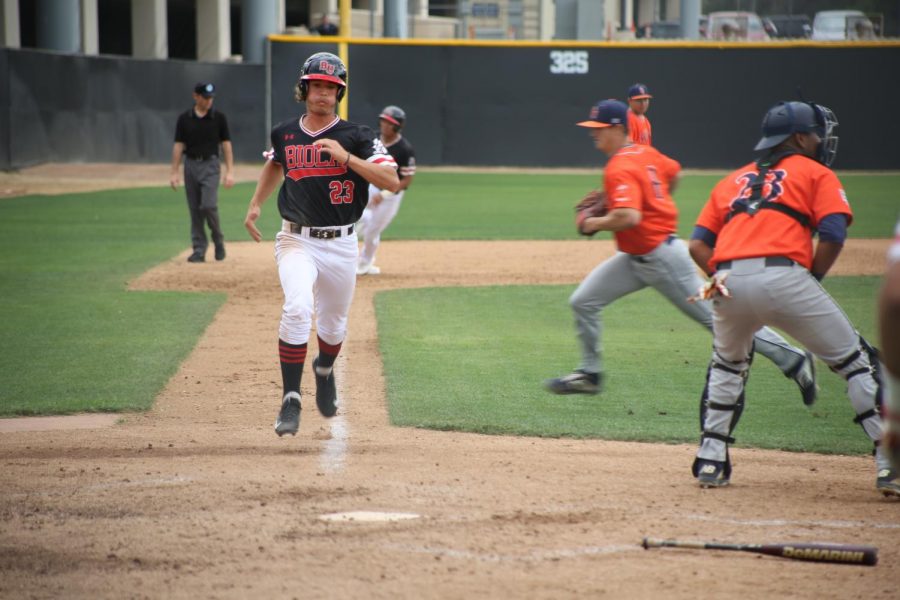 The Eagles geared up to face Fresno Pacific University at Eagles Diamond on Friday afternoon to compete in their first doubleheader against the Sunbirds. Biola walked away 11-5 in the first game of the day, but took a tough loss in the second, 9-11.
EVERYTHING EAGLES
The game started out rusty for the Eagles. FPU went up 2-0 in the first inning, but Biola quickly came out of their initial slow start. Senior third baseman Joey Magro scored on a passed ball in the second inning. However, the fourth inning is when the Eagles really started to soar.

Sophomore right fielder Jackson Collins and senior left fielder Jerron Largusa both scored a run for the Eagles, while Magro brought in two runs to put Biola up 5-3 at the bottom of the fifth. Sophomore first baseman Ryan Gallegos, freshman catcher Andrew Buglino and senior catcher Anj Bourgeois all scored in the sixth, 8-4.

“I thought we were pretty consistent there in that first game, which was nice. We played all three phases, we pitched, played defense and hit so I am pretty pleased with the process and how we approached that game,” said interim head coach Justin Duarte.

The Eagles continued to dominate on offense, as Gallegos hit a home run, bringing Collins with him. Sophomore shortstop Connor Kostecka brought home the final run of the game for the Eagles, putting them on top, 11-5.

“We did good,” Magro said. “Offensively we scored over 10 runs which is kind of our goal every game going into it. We were always putting runners on base and putting pressure on their team.”
SECOND GAME SHOCKER
Biola began the second game of the day with the same energy they had in the first. The team racked up six quick runs in the bottom of the second inning courtesy of Collins, junior designated hitter RJ Bates, Magro, Gallegos, sophomore second baseman RobertAnthony Cruz, sophomore center fielder Brandon Cody, and Largusa.

The trend continued as Largusa, Bates and a homer from Magro came together for three more runs throughout the third and fourth innings, going up 9-0.

However, momentum shifted at the top of the fifth. FPU took control of the game after trailing for most of the game. Biola was unable to produce any more hits and struggled on defense.

The Eagles could not find a way to stop FPU in the final inning. The Sunbirds scored a grand total of nine runs in the last inning of the game. Biola could not bounce back from the Sunbirds’ stunning burst of energy as FPU stole the game from the Eagles, 11-9.

Biola will play another doubleheader against Fresno Pacific Saturday at Eagles Diamond at 12 p.m. and 3 p.m.