The Force awakens with Men of Honor for Mock Rock 2019

Men of Honor dances to victory through a new Biola Star Wars story. 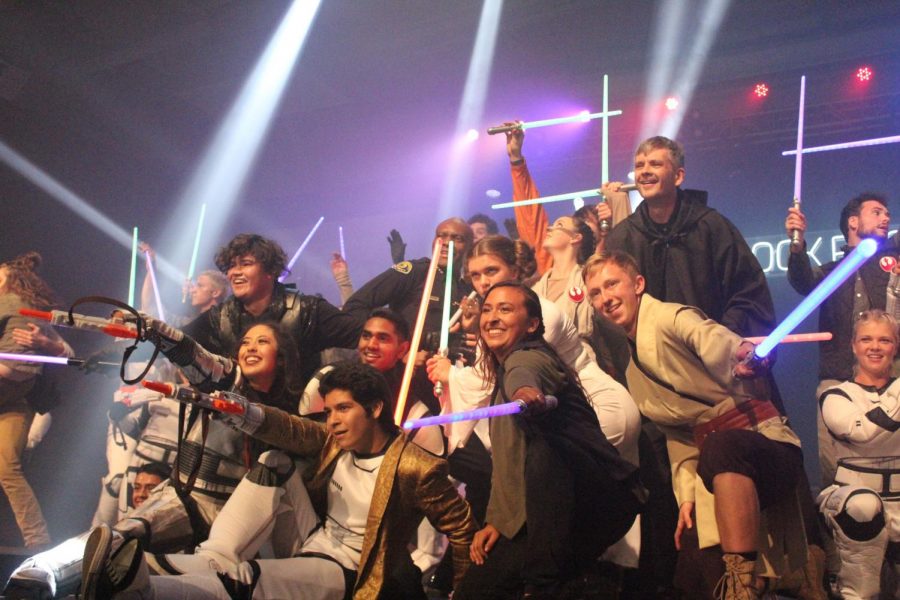 Men of Honor claimed the first-place trophy at Mock Rock 2019, lip-syncing their way through a Star Wars-inspired performance.

Five groups danced, flipped and everything short of sang for a panel of three judges: chief diversity officer Tamra Malone, vice president of Student Development Andre Stevens and assistant professor of intercultural studies Jamie Sanchez. At the end of the night, they selected the top three groups based on lip-syncing, dancing, choreography and stage presence. The decision then turned to the audience, who voted by phone for their favorite of the three acts: Heroes, Men of Honor and BroPoc. By the audience’s vote, Heroes ended in third place, Bropoc in second and Men of Honor in first.

The night was broken up with a series of skits by senior accounting major Troy Gebert and senior business administration major Julia Anderson. As they interviewed each group’s leaders, they searched for the missing Mock Rock trophy. The case was closed by finding senior history major Matt DiNaso guilty for stealing the trophy from the Student Government Association office, driven by jealousy after losing the competition his freshman year.
MEN OF HONOR: Star Wars
Men of Honor’s winning performance took place in a galaxy far, far away, telling the story of the classic rivalry between good and evil. In the skit, the Empire’s warrior Starkiller ultimately yielded to the efforts of a Jedi to win him over to the light side. The two joined forces in a lightsaber battle against Darth Vader, with each parry and dodge shining bright against the dark and foggy atmosphere.

“You’re on contract!” Ojeisekhoba warned as he burst into the cantina.

Men of Honor’s win has special impact for its members, as it comes 10 years after the Horton Hall floor first won Mock Rock in 2009, according to junior political science major and Men of Honor resident advisor Bradley Anagaran.

“I don’t know what to think, I really don’t. It’s still so surreal to me,” Anagaran said. “There’s a magic dust with it. I’m absolutely blown away. This is all still surreal to me.”

Behind the scenes, some of the group’s members credit the success to the team’s ability to collaborate and execute the performance’s electric choreography.

“Yes, Joy [Blea] and I choreographed it, but it was really a team effort,” said sophomore intercultural studies major Anna Gustafson. “Everyone from the sets, the music, the song cutting, the dancing, I couldn’t have done it without them. Men of Honor has been one of the biggest blessings of my life.”

As the culmination of five months of work, the show was charged with nervous and excited energy.

“It felt really good. We have a really good group of guys and girls, and so just being able to see the final product was really good and then, oh gosh, the crowd was so loud,” said junior journalism major Philip Smart, who played Starkiller. “I had butterflies going in, and all of a sudden you hear the screaming and it goes away, and it’s just nonstop. I love Biola, love you all.”
SOS: Monsters, Inc.
As students cheered for the first performance, SOS presented their theme Monsters, Inc., starring Boo, James P. Sullivan, Mike Wazowski and Randall Boggs. Dancing from SnowCal to SoCal, the performance took the audience through Boo’s effort to go to Biola while Sullivan and Mike assisted her throughout the journey.

One of the scenes had Boggs change the Monsters, Inc.’s industry door to Biola into Azusa Pacific University, bringing the audience to laugh and cheer. The performance ended with Boo eventually finding her way to Biola, prompting celebration of the happy ending from both the crowd and SOS. Boo, played by freshman interdisciplinary studies major Rachel Sevilla, shared her thoughts after the performance.

“Incredible. It’s just an incredible experience just to perform with people you’ve spent months with, just building relationships with all these people and growing so close and being able to just see all your work coming to a close,” Sevilla said. “It’s so rewarding.”
APEX: Mario Kart
The second performance began with the two-year winning team APEX dancing to the theme of the Super Mario Bros. APEX started with Mario and Wario’s racing kart rivalry and the mocking of Wario’s caterpillar-like mustache. Dancing with the Super Mario Bros.’ signature question blocks and racing karts through the story, the stage was filled with aerial stances and fancy moves. The performance continued with the two characters performing a comical race for victory. As Wario threw his mustache to the side of the stage, the performance concluded with a final group dance. Junior cinema and media arts major and APEX member Sophie Butler expressed her feelings for their performance.

“I think we did fantastic. We wanted to go out there and have a good time, and I think that’s exactly how we did,” Butler said.
HEROES: High School Musical
The third group of the night, Heroes, showcased a High School Musical-themed performance, including songs and scenes from all three movies, winning third place. The performance transformed the stage into a basketball court and featured songs such as “Get Your Head in the Game.” They also included a dance-off between nerds and cheerleaders and even gave Biolan advice to a new student, warning them not to use trays.

The performance ended with a graduation scene with all the graduating seniors from the group and included a cameo from President Barry Corey sending off the graduates. Dance leader for Heroes and sophomore journalism major Preet Christian said that he enjoyed being a part of the team’s progress and success.

“I am so happy. This process has been so much fun. Heroes is such a team that is based all around community and Jesus,” Christian said. “It’s been so fun.”
ENCORE: Road Trip
In the fourth performance of mock rock, Encore presented a story about a family road trip, called The Murphy Family Road Trip. The family traveled across America from Las Vegas to Zion National Park and ended their trip in New York City, stopping along the way at a hotel and a gas station.

Freshman communication sciences and disorders major Riley Agard played a park ranger at Zion National Park in the Encore performance and shared her thoughts about the performance.

“I feel like it went really good,” Agard said. “We had a lot of fun doing it, and I just kind of feel proud of all the work we’ve been putting in these past few months, just kind of seeing it all pay off, and I know we all just had the time of our lives out there.”
BROPOC: Dr. Seuss
The final team of the night, BroPoc, came away with second place for the third year in a row. BroPoc centered their story on the tales of Dr. Seuss. Thing 3, the little brother of Thing 1 and Thing 2, received an internship at the Whoville Police Precinct. Together, they dance their way to solve the case of who kidnapped Dr. Seuss. Along the way, Thing 3 met Cindy Lou Who, crushing on her in a cafe. The police force framed the Sneetches and the Grinch for the kidnapping. In the end, the Cat in the Hat, who wanted to be out of Seuss’ shadow, is revealed as the culprit.

“It’s our third year getting second place, which is pretty fun,” said Elise Posey, team leader and senior public relations major. “But I love BroPoc so much. They put their heart and soul into this performance. I’m so, so absolutely more proud than I could be of them.”