The senior mathematics major leaves a joyful legacy as his chapter at Biola comes to a close. 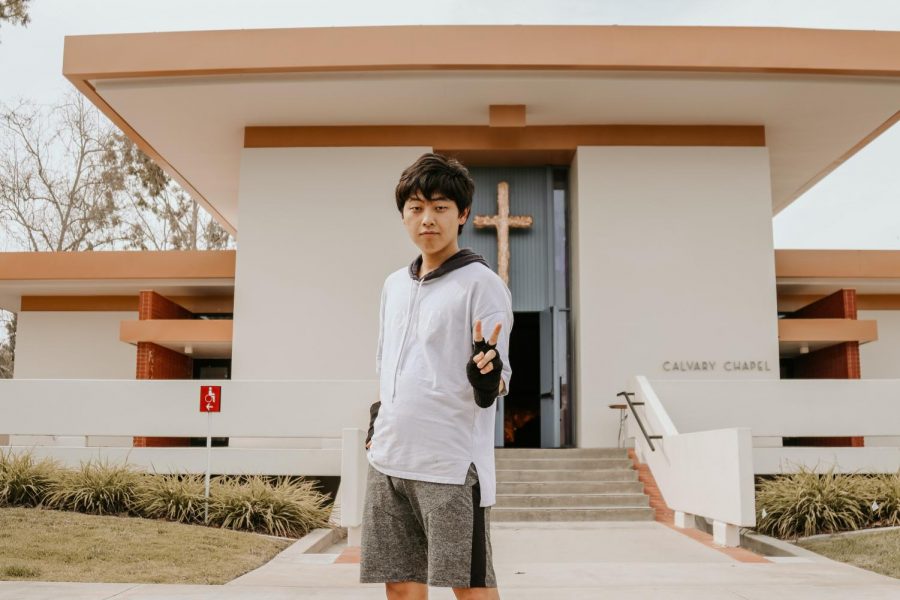 Senior mathematics major Matthew Kim stands at the entrance of Sutherland Auditorium, expectantly watching his fellow students line up on the other side of the glass doors. As the doors open, Kim raises his hand for a high-five and from the bottom of his lungs shouts a phrase that has now become familiar to so much of Biola’s student body: “Welcome to chapel, everyone!”

Many students know Kim as the happiest greeter at morning chapels or for the gloved fist bumps he gives out on Sutherland Way. Jason Wilson, chair of the math and computer science department, describes him as “the most intelligent and joyful student on campus.” Mike Ahn, assistant dean of Spiritual Development and coordinator of chapels and worship, calls Kim “a boy with nothing but a heart to serve.” Their days of interacting with him on a frequent basis is drawing close as Kim is set to graduate this coming May.

“Biola has become my home,” Kim said. “Everybody loves home and is sad to leave it. I’m going to miss it. I want to say thank you to Professor [of Old Testament Dave] Talley and [associate professor of mathematics Joseph] Dimuro and Mike and everyone who I love in Biola!”
AN INFECTIOUS JOY
Jerriane Smith, the administrative coordinator of the mathematics and computer science department, lovingly refers to Kim as a “spirit of joy that can be contagious to the people around him.”

“I do consider his joy a great asset to the department,” Smith said.

Kim is mainly known for welcoming students with a high-five at morning chapels especially the Biola Hour on Friday mornings. For the past several semesters, Kim has done so under the supervision of Ahn and his Spiritual Development colleagues. Ahn describes Kim as someone who is always ready to give someone a hug or fist bump.

“Matthew is by far the most joyful student you will see at a morning chapel,” Ahn said. “It has been a blessing to have him be such a big part of Biola Hour.”
KIM’S HEART OF SERVICE
Kim applied to be a chapel intern with Spiritual Development for the Fall 2018 semester. Though he did not get the position, he was given the official title of “chapel volunteer.” Though some students would have been discouraged or disappointed by this outcome, Kim strived to live up to his new role. Confident in his ability to welcome students, Kim asked for more. Ahn then assigned him to operate the lyric slides during worship.

“He has never made a mistake with the slides,” Ahn said. “Once he volunteers to do something, he sets his mind to it and ensures that he serves to his utmost capability.”

Wilson has similar praise of his student, also stressing that Kim’s willingness to serve comes from his deeply-rooted faith.

“Matthew has never hesitated to jump up and help with anything, even if it was the most menial, basic task,” Wilson said. “But when Matthew serves, it isn’t a disgruntled sort of attitude, but one of absolute willingness and want, even. Matthew truly exemplifies God’s model of being a servant-leader.”
GETTING TO KNOW MATTHEW
Kim describes himself as a person who would like to be known as someone ready to be a friend. Every semester, Kim switches up his catch phrase, changing the word he says after “Awesome Possum.” Last semester, Kim would customize it based on who he was interacting with, using “Awesome Possum, Mathematastic” with math faculty and fellow students and “Awesome Possum, Globalatastic” when interacting with his fellow international students. This semester, Kim’s last, the phrase is now “Awesome Possum, Shiny 19.”

If there is one truth Kim wants to leave with his beloved campus community, it is their inherent value in the Imago Dei.

“You are loved because you are God’s creation and you are unique in your own way,” Kim said.