Theatre 21 presents “As It Is In Heaven”

Immerse yourself in 19th century Kentucky with Theatre 21’s first production of the semester. 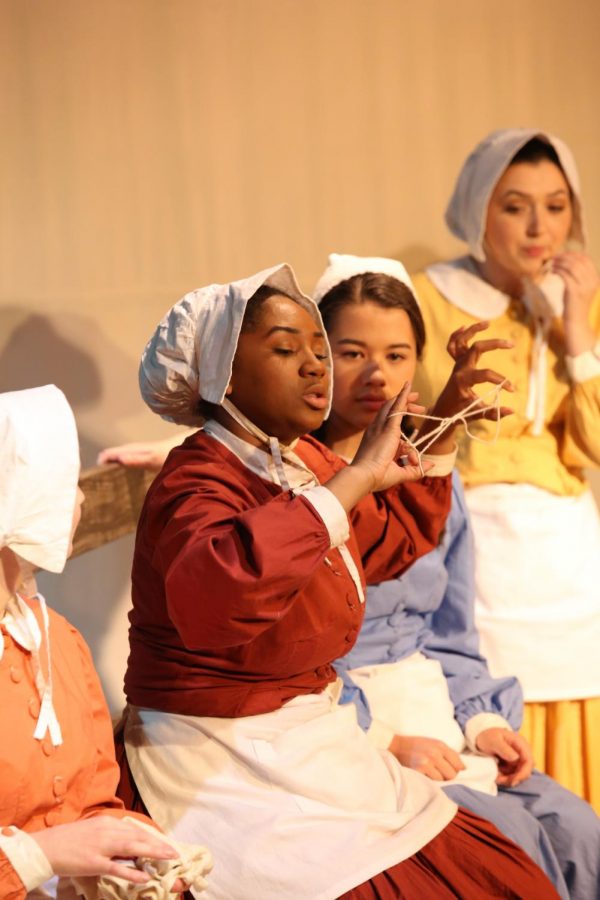 Whoever thought time travel was impossible is sadly mistaken. In Theater 21’s production of “As It Is In Heaven,” the cast and crew take the audience back to 1830s Kentucky, where the religious fundamentalist Shaker community is, well, shaken up after newcomer Fanny enters Pleasant Hill. From perfecting lines to adapting to complex character roles, each cast and crew member has uniquely poured into this comical yet serious production.
DIRECTOR’S NOTE
Although Zachary Bortot usually directs Theater 21’s productions, guest director Angela Sonner Cummings has stepped into directorship for this play. After befriending Bortot during their undergraduate years together at University of Nevada, Reno, she pursued theater following graduation, gaining experience as a teaching artist, stage manager and director in the Los Angeles area. Because she is not on campus full-time, Cummings has to balance various projects while striving to be fully present, both emotionally and physically as often as she can.

Despite her busy schedule, though, Cummings has enjoyed every part of working in the college environment. With the opportunity to direct a diverse, all-female cast, Cummings hopes the audiences leave with more than just a good time.

“I really hope the people learn something about the Shakers and an insight into their life,” Cummings said. “I don’t think a lot of people know about the impact that the early American Shakers had on our world today in America and how amazingly profound and accepting they were.”
EMPOWERED WOMEN
In contrast to most Theater 21 productions, this play features an all-female cast and all-female leadership. Senior theater major and stage manager Reagan Smalley has worked tirelessly for months preparing the production. Because Cummings is not on campus full-time, Smalley has had to step into multiple leadership roles, making sure the cast and crew fulfill Cummings’ vision. Through her first gig as stage manager, Smalley says she has grown as a person, leader and Christ follower. Since she is not typically detail-oriented, Smalley expresses that her stage manager role has taught her to pay attention to all the little things that usually go unnoticed. Above all, Smalley considers a servanthood mindset the most important aspect of stage managing.

Cast and crew members have found the preparation process unique and challenging in their own ways. Because the cast, composed of nine women, is on stage most of the play, many cast members struggled adapting to transitions. Additionally, since the play takes place in the 1800s and features old English, cast members also had a difficult time connecting with their characters, especially junior sociology major Amanda Petrowski, who portrays Eldress Hannah.

“I’ve never played anyone like [Eldress Hannah],” Petrowski said. “It was really hard for me to get a balance of her. I’m still learning everyday.”

“[Jane’s] been a blessing, but also just been harder for me to connect to her,” Allen said. “It’s been one of those beautiful processes that I wouldn’t trade for the world.”
EMPOWER THE AUDIENCE
From its unique song and dance numbers, community-centered storyline and all-female cast, the cast and crew hope the play challenges and moves the audience to see the importance of community.

Other cast members also hope the audience learns from the history of the Shakers.

“I hope they gain a new perspective,” Allen said. “I hope that some of their ideals are challenged in a good way, and I hope that they enjoy just learning about something new and something different that doesn’t always look like what we would deem normal, but is just as beautiful and just as important.”