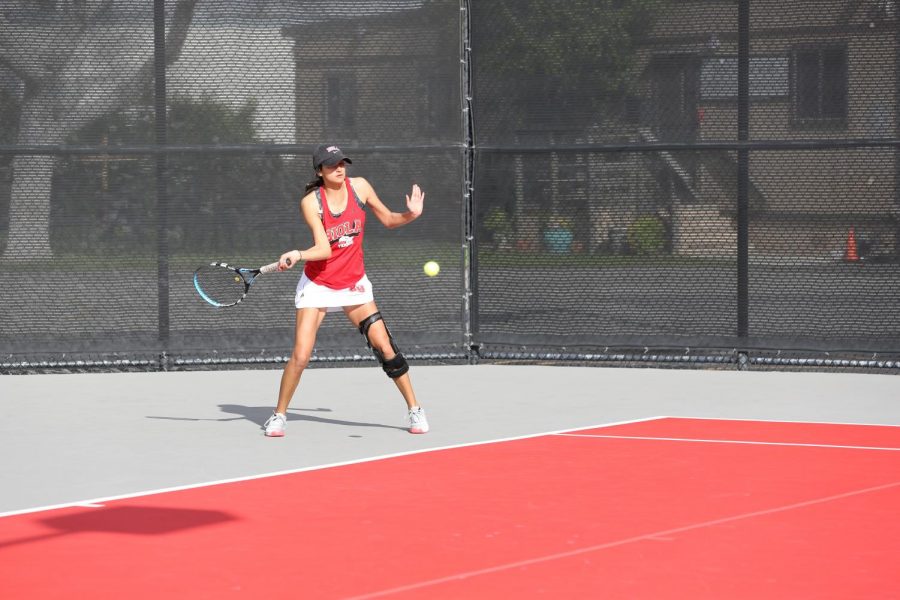 The Eagles were back in action at home for the second consecutive day, taking on Lewis-Clark [ID] State College Tuesday. After losing the doubles point and the first singles match, the Eagles rattled off four straight wins to earn the 4-2 victory.

At No.1 doubles, junior Lauren Lee and sophomore Esther Lee picked up a quick 6-1 win to start the day. However, the Warriors responded by defeating junior Allison Torres and freshman Ines Diaz 6-3. LCC earned the doubles point with a 6-4 win over sophomores Sarah Morgan and Lily Waterhouse.

“I think this is the first time we lost the doubles point and actually won the match. We just competed so hard in the singles,” said head coach David Goodman.

Esther Lee was forced to retire in the first set on the No. 1 court due to injury, and things seemed bleak for Biola. However, the Eagles showed the same fight they have been known for all year, starting with a 6-3, 6-2 win from Torres on the No. 6 court.

Lauren Lee followed that up with a dominant 6-2, 6-1 win on court 5. Diaz then pushed the Eagles to the brink of a win with a big 6-3, 6-2 victory on the No. 2 court. Sophomore Madison Swaney clinched the win for the Eagles on the No. 4 court as she battled to a 6-3, 6-2 win, her first singles victory of the season. Waterhouse was leading 2-1 in the third set before her match was stopped.

“It feels so great, especially [after] being injured for the whole part of the first season. Now being able to be a part and contribute feels really good,” Swaney said.