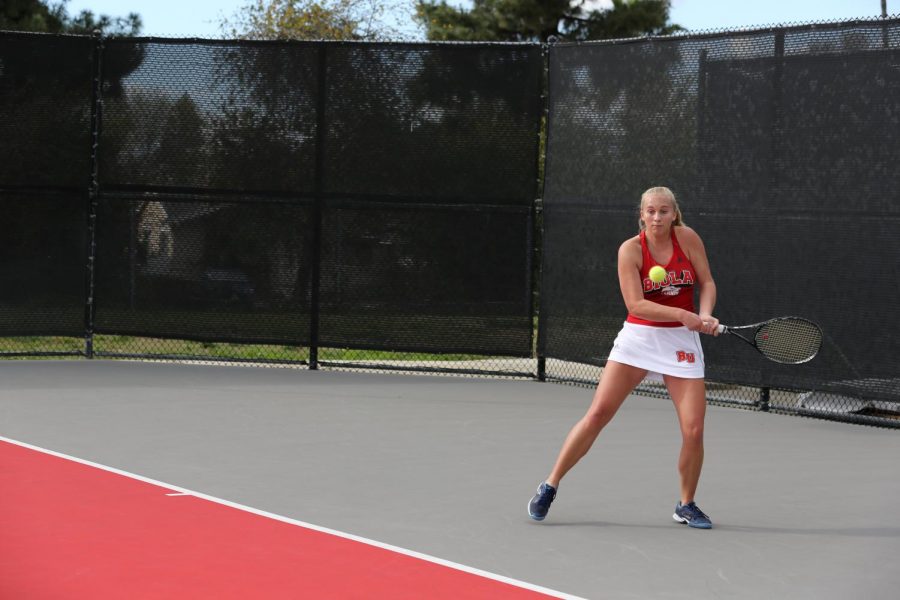 Biola was back in action at home against University of Hawaii at Hilo on Monday. The Eagles fought through a grueling three-hour match, coming out on the right side of a thrilling 4-3 victory.
IMPORTANT POINT
The Eagles fell behind early in doubles, as the tandem of sophomores Lily Waterhouse and Madison Swaney fell 6-0. However, junior Lauren Lee and sophomore Esther Lee brought the score even with a 6-2 win. Biola won the doubles point as junior Allison Torres and freshman Ines Diaz claimed a 6-2 victory.

“The doubles was kinda odd because the matches weren’t really that close. All that matters is that we win two and we got that point and it was the difference again,” said head coach David Goodman.
COMEBACK TIME
In singles, Torres fell on the No. 6 court 6-0, 6-3. Esther Lee, playing on the No. 1 court, lost shortly after by a score of 6-0, 6-2. On the No. 4 court, Swaney also lost her match 6-3, 6-2. However, Diaz picked up the Eagles’ first singles win on the No. 2 court with a big 6-2, 7-5 victory.

“In tennis everything is possible. Even if they’re one or two in the conference we can beat them,” Diaz said.

On the No. 5 court, Lauren Lee picked up a huge 6-4, 2-6, 6-2 win that set up an all-important match on the No. 3 court where Waterhouse was competing. After claiming the first set 6-4, she fell 2-6 in the second to set up an exciting third set that would go to a tiebreak at 6-6. Waterhouse outplayed her opponent, winning five straight points to clinch the match for the Eagles as she won the tiebreak 7-2.

“They’re just fighters. The girls just wanna win and be successful and they work really hard. I think this is easily the best win we’ve had since I’ve been coaching here. I’m floored at how well we did,” Goodman said.

With the victory, the Eagles now sit at 6-7, and will continue play at home on Tuesday against Lewis-Clark State University at 2 p.m.