The second day of the conference approaches the topic of the global church and triumph through struggle. 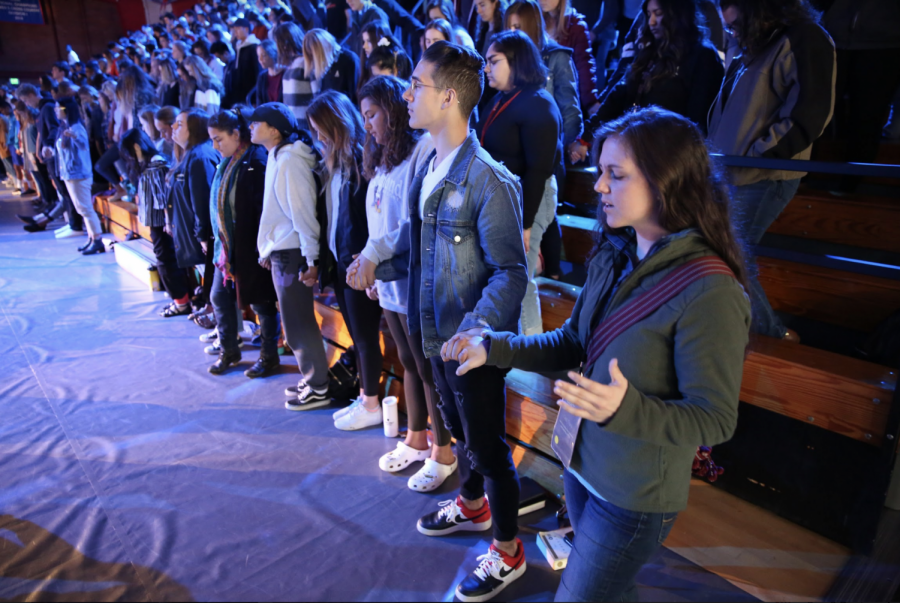 Day two of Missions Conference commenced the morning of March 21 as students rubbed the sleep from their eyes, ready to take on another day. Groups of attendees formed a line that lead to Chase Gymnasium as discussions broke out in anticipation the full day of speakers and missionary events.
RECIPROCAL MISSIONS
In Session four, Emcee Jake Nagy took to the stage to introduce speaker Christian Mungai, the Global Engagement Pastor of Mariners Church in Irvine. The session provided a Q&A, with Nagy prompting questions regarding Mungai’s life and ministry. Mungai is a missionary who came from Kenya to serve the kingdom in America. According to the speaker, the primary mission field is in America, as 75 percent of Christians are in the global south and the percentage in the west is rapidly declining.

“The mission field is right here and we have not been able to recognize it,” Mungai said during the event. “Missions is no longer from the west to the rest, it’s from everyone to everywhere.”

Mungai also said that this concept of reciprocal missions is aimed at respecting and recognizing the work of past missionaries while also growing and evolving with time.

“We stand on the shoulders of giants. That’s why we need to affirm and bless them while rethinking those methods… of doing missions,” Mungai said during the event.

“We as Americans can be kind of egotistical in how we share the gospel in saying that we know how it’s supposed to be done, whereas different cultures respond differently,” Stringfellow said.

According to Mungai, one of the best ways Christians can serve the kingdom is through getting a better understanding of their own experiences and faith. Mungai asserted that getting to know one’s own stories leads to engagement with other people’s stories, which help them enter into meaningful relationships.

“We need to embrace and engage our own stories, because I think resting and sitting in our own pain and own story is really so important before we are able to go out and help others,” said freshman psychology major Sadie Wilson.
WOVEN INTO GOD’S STORY
In his second and last presentation of the conference, pastor Ben Stuart centered his teaching on Hebrews 11:1-16. Through the passage, Stuart highlighted examples of how God’s people act by faith in order to be a part of God’s broader story.

Stuart first described his own experiences and how he learned to search for God through despair. After a debilitating back injury, Stuart said he spent nights awake and in pain, and begged God to take his pain away. Although his own pain was excruciating, Stuart said he felt that God was using it to show him how much pain there is throughout the world and reminding him to care about things that matter.

“When I seek after him, he helps me look past the obsession over things that fade,” Stuart said during the event.

He described his realization that, though pain exists, God is doing something about it. Stuart said desire was and is to be a part of that plan—and for his college-aged audience to feel the same reorientation.

“Don’t engage in everything college has to offer and miss out on the one thing you were made for, and that’s to know him,” Stuart said during the event.

Stuart exhorted his audience to be authentic in their relationship with God and to confront God with difficult questions. He recalled his own journey of faith, at times spent sitting in the park, poring through Scripture and writing down questions in response to the text. That process, Stuart said, shows an unwillingness to give up—a sign of faith.

Stuart said Hebrews 11 shows how, through faith, followers of Christ like Noah and Abraham have become a part of God’s preeminent design.

“All these people didn’t get to see the full culmination of their faith, but they got to be woven into the story,” Stuart said during the event.

Junior business administration major Paula Labate said she appreciated how Stuart continually referred back to God’s will for his people.

“He reiterated throughout that God just wants us to seek after him, and I think that’s something that’s huge, and that God will meet us where we are,” Labate said.
RESPONDING TO BROKENNESS
The last session of the day opened with readings from Acts 1:6-8 in different languages from students as a call to spread the gospel to all of the world. The readings closed with Revelation 7:9, a reminder of the unity of God’s people through Christ. Following this was a video depicting the love and grace of Jesus from the perspective of Barabbas, the prisoner who was released instead of Jesus by the crowds and Pontius Pilate before his crucifixion.

Students then heard from Glen Campbell of Godfirst City Church, a multicultural church in South Africa, about kingdom burdens and how to respond to brokenness in the world as ambassadors of Christ. Campbell explained that all Christians are called to the same mission and purpose, but have been given unique burdens from God out of response to brokenness.

“Your kingdom burden is uniquely individual. It is how you are going to live out mission and purpose within the context of God’s story,” Campbell said during the event. “It compels you to do something that God puts on your heart to do.”

“Nehemiah grieves the news after hearing about brokenness,” Campbell said during the event. “His burden was not to rebuild a wall, it was to bring restoration to a community of people that had stopped worshipping together and bring protection around them to worship.”

Closing with a challenge, Campbell asked students to pray every day for the next seven days that God would help them discover their unique burdens and find what brokenness God is calling them to address.