The first day of the conference calls students to be citizens of the kingdom and offers strategies to thwart spiritual attacks. 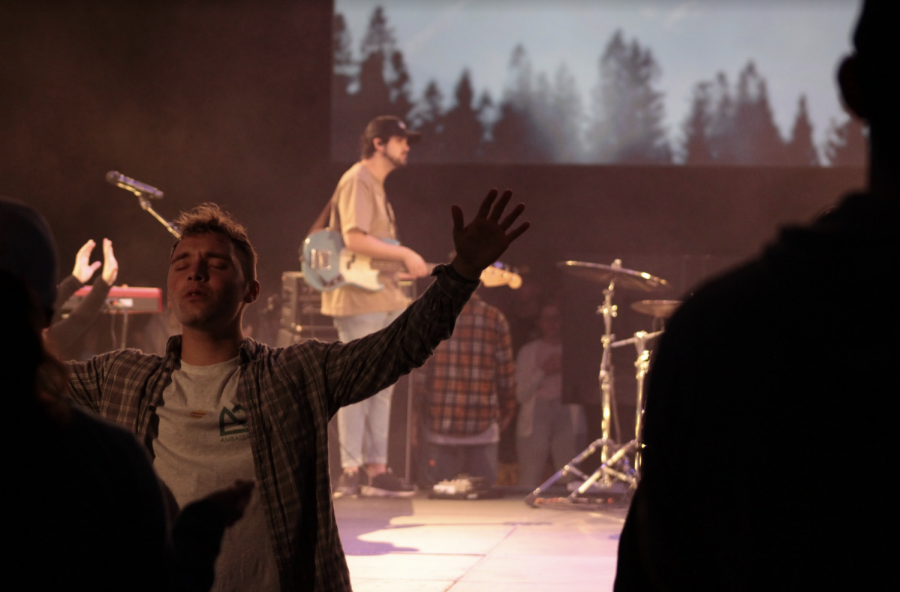 Photograph by Yehju Park/ THE CHIMES

As the Missions Conference of 2019 started with students in a long line that snaked its way past the Bell Tower, attendees anticipated receiving a few conference credits, but left, speakers hope, with a diverse experience and a renewed sense of identity.
THE NEW TRADITIONAL LAUNCH
As students walked into Chase Gymnasium, they could spot the new stage, this year changed into a circular shape. The conference launched with students again representing their nations with flags around their backs. With the audience members cheering proudly for their countries’ flags, runners representing Palestine, Israel and Syria paraded together with their flags for the first time. Senior biblical studies major and student co-director of Missions Conference Chris Middleton shared that his time spent in Israel influenced this idea of unity.

“Even though on [an] earthly basis we are divided, altogether in the body of Christ, the Christians in those countries are united beyond borders,” Middleton said.

The end of the national flag celebration transitioned into worship with the new headlining band Housefires.
SESSION 1: INVITATION TO THE HOLY EMBASSY OF GOD
Opening with a reading of 2 Corinthians 5:16 and 5:21, the main verses of this year’s theme, founder and pastor of Fellowship Monrovia Albert Tate stepped onto the stage with a warning for each student to have a spiritual burning within their heart.

Within the focus of identity, Tate narrowed down his message to the importance of guarding one’s identity from the devil. Tate continued to preach about bringing broken reflections to God instead of following world-given labels.

The first session ended with Housefires’ “On and On,” a reminder of God’s unconditional love to the leaving students.

“I think the stage design is the biggest difference, just because it [was a] circular stage and not the front-facing stage,” Szeto said. “[It was] so interesting to see how the band [played] on that stage and how the speaker [had] to circulate and really engage themselves with the audience.”
SESSION 2: STORY TIME ABOUT FOREIGN AMBASSADORS
The second session of the day opened with artist Jon Crowe drawing with sand the story of the first ambassadors and how global Christians came to be today. Starting with the cross, Crowe drew his way to the Holy Spirit descending on the apostles with tongues of fire. He indicated with speech bubbles in the drawing that missionaries  are now sharing that same salvation story. Crowe ended his art piece with the written exhortation, “Go unto the world,” causing the crowd to erupt with applause.

“We are called to go unto the world and tell other people what we believe and why we believe it,” Crowe said.

Margaret Yu, national director of Epic Movement and executive director of Ethnic Focused Communities of Cru, invited the crowd to sit back and relax as she retold the stories of Moses and Hadassah, or Esther, as foreigners in their lands struggling with identity.

These Bible characters both represented Jews or Hebrews in their lands, which viewed their people as lowly. Hadassah became Queen of Persia, but embraced her identity for the glory of God. Yu encouraged the attendees to do the same, whether it be with gender, ethnicity or culture.

“What the people may reject, God uses,” Yu said in the session.

Even if some believe they are not worthy to serve God, Yu stated that they are God’s elect. For support, she referenced 1 Peter 2:9-10, which states that believers are a “royal priesthood” and “a holy nation.” Yu hoped students walked away from her session believing these truths about themselves.

“[I hope] that they know that they’re beloved and chosen to participate in God’s mission, wherever they are, and that they’re worthy,” Yu said.
SESSION 3: FIGHTING AGAINST SATAN’S STRATEGY
As students squeezed into the gym for the last session on Wednesday, they gathered around the center stage for the message from pastor Ben Stuart of Passion City Church.

With the session opening with a video that invited everyone in the room to raise their phone flashlights in response to questions and show that they are not alone in whatever hardships they are facing and transitioning to the song “Jesus Paid It All,” sung in five languages, Session 3 of Missions Conference created an atmosphere that for many was unexpected.

“It was some vulnerability that I did not expect, but I think it was good and it showed that people were not alone in their struggles,” said sophomore psychology major Sam Corey.

Stuart spoke to the session attendees about the topic of of Satan’s strategy in trying to lure God’s people into a life of sin. Through comedic analogies and impassioned speaking, Stuart described how Christians can defend against the strategy of the devil and actively pursue God in the process.

“I think it was a lot cooler than the ones from past years. I really like this one, from the worship to the decorations and everything,” said junior public relations major Sefania Tjahaja.

While the students explained their enjoyment for this session, Stuart explained what it meant to him as a speaker at the conference.

“I love the opportunity to intersect with young people who are right in the center of making so many strategic decisions in their life and getting to do it in an environment like this. There is a lot of support and encouragement,” Stuart said.