Ambassadors of Compassion: Here and There

You might be the only one to show Jesus to someone. 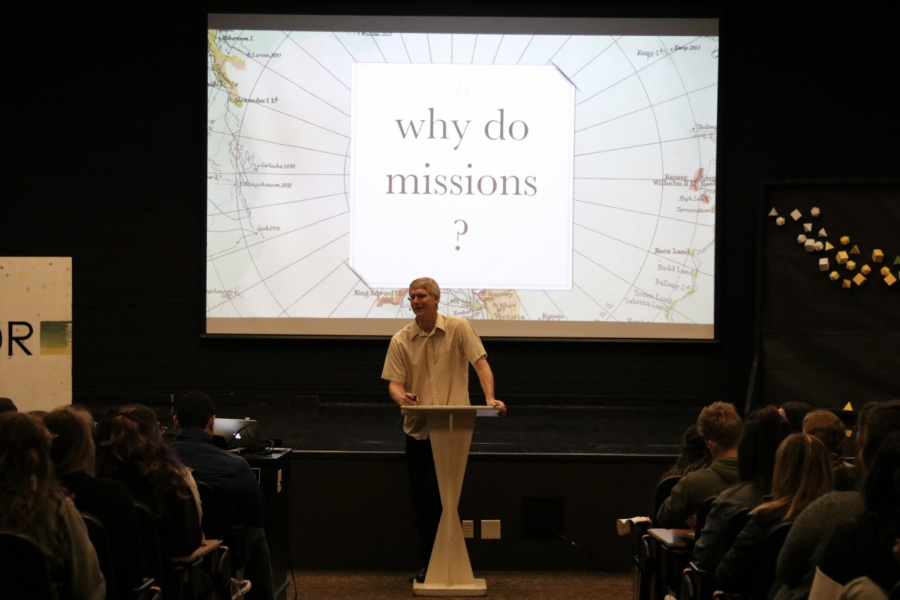 Photograph by Amber Chen/ THE CHIMES

Professor of biblical and theological studies Matt Williams spoke on being Ambassadors of Compassion: Here and There in Mayers Auditorium. He first defined the difference between Missions versus Mission, with Missions being a cross-cultural mission experience and Mission being the great commission that all of God’s children are involved in.

Williams gave five main reasons on why God’s people should do missions: obedience to what God has called us to do, need, guilt, the glory of God needing to be extended and loving others by showing them compassion.

His first main claim was that those who have experienced the real compassion of Jesus will be moved in a different way. To support this claim, he showed multiple clips from a visual Bible movie from Matthew depicting Jesus healing the blind, sick, and mute. In order to make his audience think, he prompted them to take a few minutes to pray and ask God about if we think God has the same compassion for us as he did for the people we watched get healed in the clips.

As I was praying, I realized that no matter my situation, whether I am stressed about a school assignment or getting something finished for my team leadership position, God always grants me with an overwhelming sense of peace, comfort, discernment, time and strength as I enter into tougher or scarier situations. God has compassion for me, and he is not a God who desires for his children to suffer.

Williams’ second claim was that those who have experienced the compassion of Jesus will share it with others. He emphasized that, even if we do not know anything about a person, we should show them the same type of compassion we would if we did know their story. He gave an example of Wess Stafford, the former CEO of Compassion International, a non-profit children’s organization, and his interaction with a young girl who had been sexually assaulted by a man in her village. Stafford showed her immense compassion through affirming the girl’s identity in Christ without even knowing that she had had such a traumatic experience soon before their interaction. He was able to do this because he himself had experienced the compassion of Christ.

To end his talk, Professor Williams asked his audience the question, “What if you knew?” This question was meant to make his audience think about if they knew certain things about the people they interacted with. Would they treat them differently and show them more compassion than if they did not know anything about them? He encouraged his audience to show Jesus wherever they go, and that if Biola is a community of grace, all students should practice compassion here and now. This practice will then benefit all students and people, for “if we can serve people here, we can serve people there.”