The Eagles get funding to add more courts and video streaming technology. 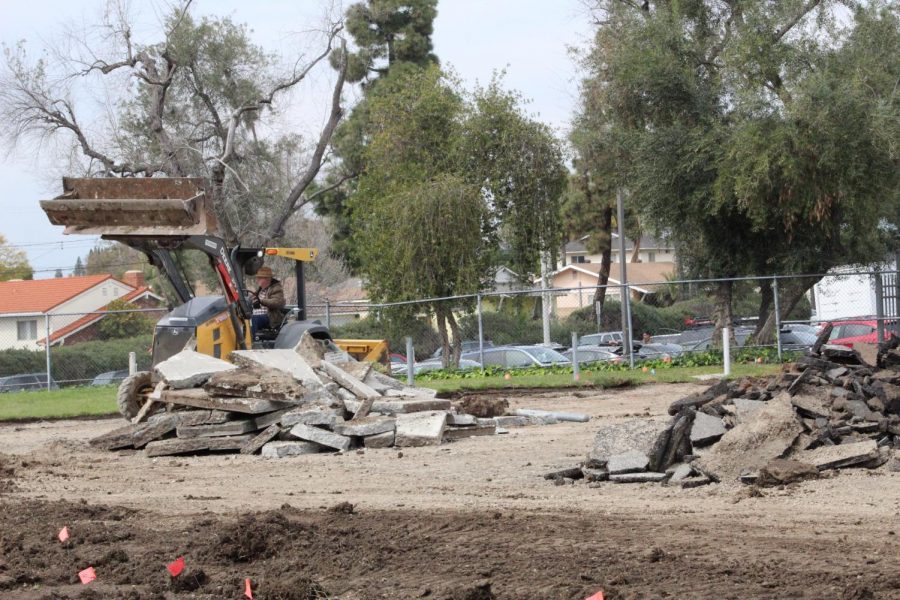 The sounds of construction can be heard on the south campus as the Biola Tennis Center is undergoing major renovations. An old parking lot next to the current tennis courts is being excavated to make room for two new courts and a new office and storage area. If that was not enough for the program, the athletics department will also install a live streaming system for all of the courts.

Some of the athletes have felt understandably excited about the additions. Sophomore tennis player Logan Blair says the renovations will be enjoyable for younger players in years to come.

“I feel like this is really just going to put us a step above everyone else in the conference and really gives us the advantage and facilities we need to compete at the highest level and be at the top of our conference,” Blair said.
CONSTRUCTION UNDERWAY
Athletics announced the construction on social media during spring break, thanking donors who had contributed to funding the project. Work got underway just one week later.

“The tennis court expansion has been on Biola’s master plan for over a decade. It was included as part of the university’s last capital fundraising campaign and has had several large fundraising pushes over the past few years, which has helped make it a reality,” said assistant athletic director for communications and game management Neil Morgan via email.

Morgan says that the renovation is planned to only be a two-to-three month project. He also says having such a quick turnaround will allow for the tennis program to go into next semester able to use the new facility to its full potential.

New data connections and cameras are going to allow video streaming at all eight courts in HD during the matches.

However, Neil Morgan says some of the add-ons will need more funding before coming to life. The clubhouse for the players and staff will be added in the future when funding becomes available, but the total cost for the renovations is not yet determined. Regardless, upgrades that are in the works will allow the program to advance their training and draw in a larger crowd.

“We will have better facilities for the players and recruiting becomes better and just makes Biola tennis a more player-friendly space,” Blair said.

Even after the fresh makeover, Neil Morgan says that there are no plans to put up a cover charge for games, even after the renovations are complete.

“Public use hours may eventually become more restrictive in an attempt to protect the university’s investment in the upgraded facility. Those conversations are still ongoing,” Morgan said via email.
ATHLETES SHOW APPRECIATION
The coaching staff and athletes are looking forward to the potential that this expansion will bring to the team and the sport as it attempts to grow popularity on campus.

“We are thrilled, we just feel completely blessed that it is happening. I think we are going to have one of the best college tennis facilities in the nation,” said head tennis coach David Goodman.

Adding additional courts will also allow for the athletes to have more flexibility during practices and games.

“I think it will allow us to get more one-on-one practice with each other and also with the coaches. It will allow more groups to play at the same time. Sometimes recreational players come out when we are playing and this will give them the chance to use the courts with us,” said sophomore Sarah Morgan.

Goodman remains thankful for what they have already been blessed with.

“I think we already have a great facility, but this is going to put us over the top with having eight courts and then live streaming video on all the courts. It is pretty unique for Division II tennis,” Goodman said.

Adding two new courts to the tennis center will allow for shorter matches.

“We will be able to run more matches through quicker. We can play at the same time as the guys and that always keeps the energy really high,” Sarah Morgan said.

This is just the beginning of a series of future expansions within Biola Athletics, according to Neil Morgan. Investments on the south side of campus have no plans of stopping at the tennis courts. The master plan involves potential future funding for baseball and softball facility upgrades, a full-length track and a convocation/event center.

“We are so excited to have new courts that allow for better practice and a more professional feel to our facilities. We are excited for the progress and effort it took to make this happen and the opportunities that will present itself because of this,” Blair said.