The Eagles defeat Penguins in a nerve-racking 4-3 win. 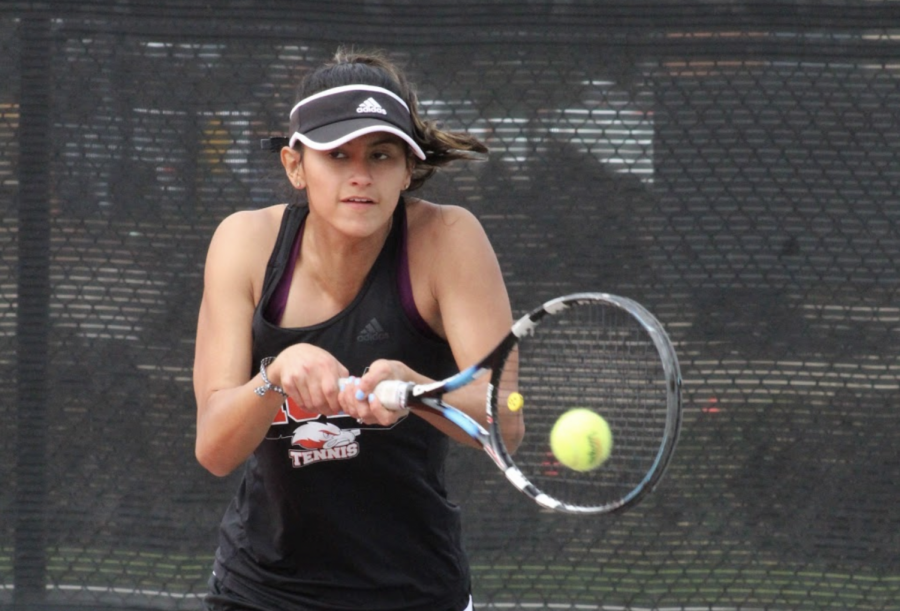 The Eagles competed at home for a third consecutive day on Wednesday against Dominican University. Biola gained the upper hand against the Penguins, winning two of the three doubles matches and three of the six singles matches to claim the 4-3 victory.

Once again, junior Lauren Lee and sophomore Esther Lee played a part in boosting their team at the start with a 6-1 victory at No. 1 doubles for their fourth win in seven matches as a duo. At No. 3 doubles, freshman Ines Diaz and junior Allison Torres finished with a 6-4 victory after the Penguins walked away at No. 2 with a 6-0 win over sophomore Lily Waterhouse and freshman Anna Hartmann.

Despite falling behind early, Diaz and her partner came back strong for the doubles win.

“We were losing by quite a bit,” Diaz said. “We were losing at 1-4. Then we came up and won at 6-4. This was a great feeling and a great way to start singles for everyone.”

In singles, the Eagles continued to persevere. Waterhouse was the first to finish a match and came out with a 0-6, 3-6 loss, but Diaz then finished her match with a 6-2, 7-5 victory.

“I was really stressed coming into it,” Esther Lee said. “I just wanted to play my game but then I ended up being the deciding point for this match. I am really happy… because I feel like I have grown a lot through this one match. I feel like I am floating.”

Despite a very satisfying win over the Penguins, head coach David Goodman acknowledged Dominican’s skill and the challenge they presented.

“Dominican is a great team,” Goodman said. “They have been a strong team in our conference for the last couple years. I knew it was going to be a really tough battle and a very close match today. I do not think we played our best tennis, but we did what it took to win and that is always great to see.”

With the victory over the Penguins, the Eagles have punched their ticket to the PacWest Championships in Surprise, Arizona from April 17-20. Biola (5-4) continues play at Point Loma Nazarene University on Saturday at 3 p.m.