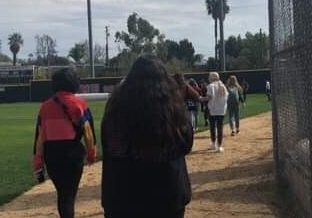 Students walk to the baseball field after being evacuated from lower campus due to a major gas leak.

A contractor accident during a drainage repairment caused the March 4 gas leak which led to the evacuation of lower campus, facilities management reports.
THE SITUATION
According to facilities management assistant director Beverly Cain, a storm drainage pipe located just outside of Stewart Hall had not been functioning since Christmas break. Facilities plumbers had tried to clear the drainage but failed to do so. Cain then determined that the pipes underground were the cause of the problem.

“It was probably about five feet down, so I didn’t want to dig that out with students around and everything,” Cain said. “So [for] spring break we scheduled for our contractor to come, dig it up and repair it.”

When facilities contractor Air Control Systems started its repairment process for the pipes, the workers accidentally hit the gas lines. As emergency alerts started to spread around campus, facilities capped off the lines in order to avoid any further damage or unexpected leaks. Cain says that the contractors continued their repairment nonetheless, which was the reason for an over-24-hour gas shut-off for Hope Hall, Stewart Hall and Hart Hall.

“Really all the gas is in those halls are for the clothes dryers and the stoves. It’s kind of a low impact, but that’s why we left it off because I wanted him to continue his job,” Cain said.
REPAIRING COSTS
ACS was eventually deemed responsible for the payment of the broken gas line. The storm drainage repairment cost $20,000 to fix, according to Cain.

“That [accident] really was not the gas repair… it was just an oops, which can happen,” Cain said. “We have plans that lay out where all the piping is, but they are not always exact. That’s what caused the gas leak.”