Eagles ride past the Mustangs in 4-1 win. 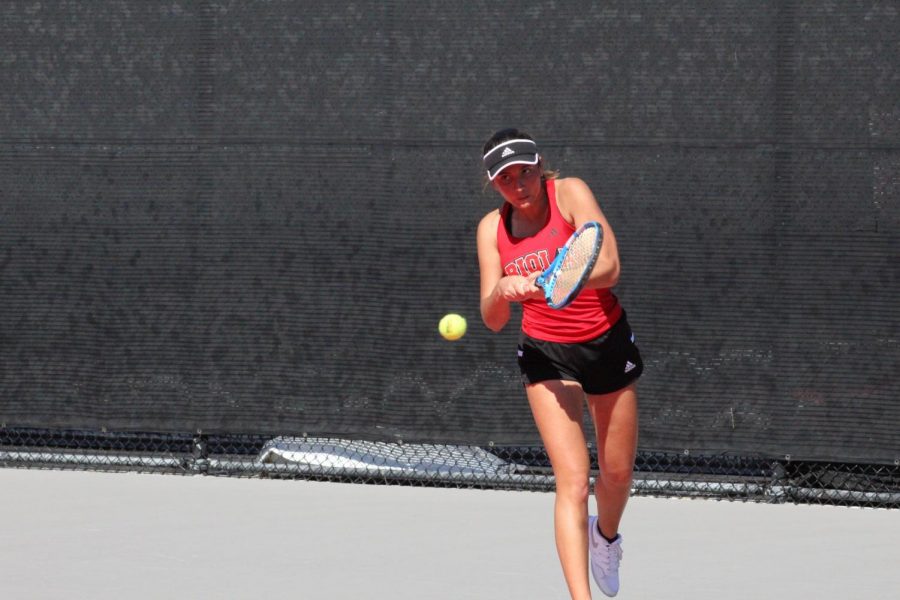 “I thought we played awesome. I think it was our best match of the year so far, I feel like we’re in a really good space and we want to keep improving and keep doing what we’re doing,” said head coach David Goodman.

The Eagles got off to a rough start with a loss at number one doubles. Despite their best efforts, the duo of junior Lauren Lee and sophomore Esther Lee fell 6-3. However, the tandem of junior Allison Torres and freshman Ines Diaz got Biola back on track with a 6-3 win.

Sophomore Lily Waterhouse and freshman Anna Hartmann then helped the Eagles claim the doubles point with a big 6-2 win.

“We’re able to pick each other up when we’re feeling down. We’re able to cheer each other on even if it looks like we’re losing. Our team chemistry is absolutely amazing,” Torres said.

Next up was singles, and the Eagles got off to a quick start as Esther Lee took a dominant 6-3, 6-1 win. Lauren Lee followed that up with a win of her own, taking down her opponent by a score of 6-2, 6-1.

Waterhouse finished off the victory for the Eagles, as she claimed an important 6-2, 6-2 victory.

“Energy and intensity are probably the biggest things that we need for this group. If we have energy to play hard for three hours a day, that’s gonna make a big difference, and the intensity of working hard for every single point we play,” Goodman said.

The Eagles (4-3) continue play at home on Tuesday at 2 p.m. against Angelo State University.