Watch it before it’s gone: “The Favourite,” “Spider-Man: Into the Spider-Verse” and “Roma”

Three great films to watch in theatres before the Academy Awards. 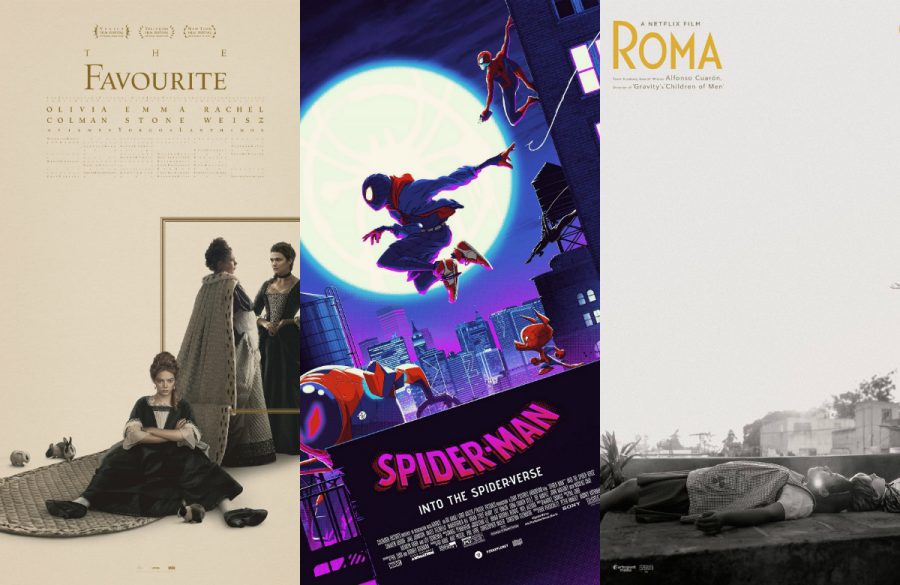 Welcome to Oscar season. The 91st Academy Award nominees were announced last Tuesday. On Feb. 24, some of the best films of the year will go head-to-head to see which walks away with one of the most prestigious awards in the film industry. The awards are just around the corner, so last-minute showings of some of the nominees are still in theaters. You may not be able to see them all before they get pulled from cinemas, but here are some recommendations of what you should see in theaters before they go. Be sure to check out all of the nominated films on the list here.
“The Favourite”
Funny, witty and dark, Yorgos Lanthimos’ Best Picture nominee is truly shocking. Sick and troubled Queen Anne, played by Olivia Colman, and her best friend Lady Sarah, played by Rachel Weisz, rule England together. Then comes Lady Sarah’s bitter cousin Abigail, played by Emma Stone, who seeks to elevate her status through attempting to win the queen’s affections by any means necessary. This may be Stone’s best work in an already illustrious career, but each leading lady deserves recognition for their tremendous performances. Exceptional acting paired with artistic filming make this film a strange yet beautiful movie to catch in theaters. You can watch “The Favourite” at Regal La Habra Stadium 16, AMC Norwalk 20 and Edwards Cerritos Stadium 10.
“Spider-man: Into the Spider-Verse”
Though its main targets were originally kids and comic book fans, “Spider-man: Into the Spider-Verse” turned out to be a fun watch for people of all ages and walks of life. New York City teenager Miles Morales, voiced by Shameik Moore, becomes Spider-Man and hopes to save his universe and the universes of four other Spider-people before time runs out. This animated marvel is nominated for Best Animated Picture in this year’s Academy Awards. The visual effects create a truly immersive animated experience for audiences, taking viewers into the multi-dimensional world of this film. Go watch it at AMC La Mirada 7, Regal La Habra Stadium 16, AMC Norwalk 20 and Edwards Cerritos Stadium 10.
“Roma”
Although available on Netflix, “Roma” has been released in select cinemas for a limited time. Set in Mexico City during the 70’s, maid Cleo, played by Yalitza Aparicio, deals with the everyday struggles of her life and the family she works for. “Roma” has been nominated for multiple Academy Awards, including Best Picture and Best Foreign Film. Director and writer Alfonso Cuarón captures the sights and sounds of each scene with beauty and clarity, using black and white vignette to immerse viewers into the skillfully shot scenes and detailed sounds that surround them in the theater. Despite the fact that you can watch this on Netflix, it is a truly amazing experience seeing this film in theaters. This movie is only in select cinemas for another week or so, with showings at Laemmle Playhouse 7, Vintage Cinemas Vista Theatre and Landmark NuArt Theatre.