Treinen leads the team with 25 points and dunks to finish the night. 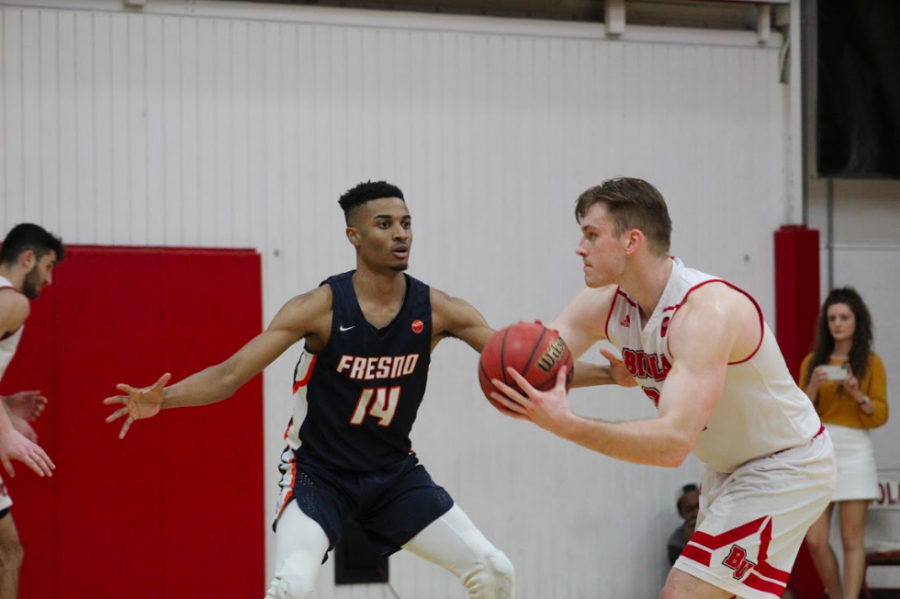 Treinen gave the Eagles a quick start in the first half, scoring a three-pointer and laying in a two-pointer while being fouled to put Biola up 6-0 only a minute into the game. Despite scrappy play from Fresno, Biola kept them at bay and Treinen continued to put points on the board with a second three-point play. Around the ten minute mark, the Eagles fell behind 14-16 but Treinen scrambled in the key and tied up the score.

“We just pulled together as a team tonight. We didn’t play selfish and I’m really proud of our guys,” Treinen said.

The second half started at a slower pace for the Eagles, with Fresno tying up the game 38-38 with several layups and a couple free throws. Biola took a timeout four minutes into the half to regroup and returned stronger than before by tightening up on defense and bringing the score to 40-42 with 13 minutes left. Bagatourian lit a spark on offense with a three-pointer and senior forward Steve Herve gave Biola the lead by sinking two free throws midway through the half.

The Eagles kept up the aggressive defense, and despite several fouls led FPU 56-51 with seven minutes to go. With under a minute left to go, Bagatourian scored a three off an assist from Treinen and freshman guard Alex Wright iced the final moments with four free throws. Treinen then dunked the ball, bringing the crowd to their feet and making the final score 73-69.

Despite the Eagles’ victory, Bagatourian says the team cannot afford to ease up.

“We have one more practice before our road trip and we have to stay focused,” Bagatourian said.