This thriller’s confusing story and slow space blend poorly together. 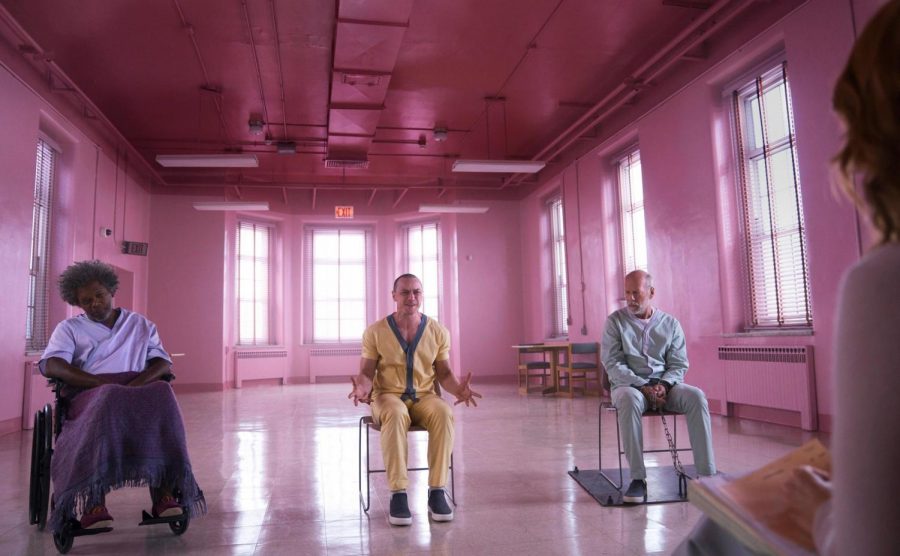 In 2016, director M. Night Shyamalan followed his beloved 2000 superhero film “Unbreakable” with the thriller flick “Split,” setting up an unexpected cinematic universe. In “Glass,” Bruce Willis and Samuel L. Jackson reprise their “Unbreakable” roles as David Dunn and Mr. Glass, this time joined by James McAvoy’s Kevin Crumb from the second film. Their performances all stand as brilliant, as the original characters stay true to form while McAvoy impresses once again by embodying Crumb’s 23 different personalities. With that being said, it is difficult to feel any motivation to try and keep up with what is going on with the film.
THE SLOW PACE, CONFUSING STORY
There is slow and then there is too slow. “Glass” falls into the latter category. The exciting moments at the beginning of the film do not accelerate it until much later in the story. The slow pace fails to keep audiences engaged and makes the film incredibly boring, contributing further to the confusing story.

As with many crossover films, the story is convoluted. The film tries to delve deeper into the same plans Mr. Glass masterminded in “Unbreakable,” but in an effort to make them seem more detailed and elaborate, the film ends up bewildering the audience even more. Worst of all, “Glass” fails to offer an explanation on the development of these plans. To put it simply, the film’s plot is a heap of a mess.
PSYCHOLOGY WORKS
As expected with psychological thrillers, “Glass” dives into the psychology of the heroes and villains of the film. This is one of the things that the film does very well. Character development is very important, and “Glass” gives us a tour of the three main character’ unique minds and experiences. This film uses flashbacks to explain how they behave the way they are, delving deep into their traumatic pasts. Not only do they reveal the reasons for their behavior, but they also reveal their weaknesses. For example, in regards to Crumb and his violent, unpredictable tendencies as well as his abusive past, the doctors in the psychiatric ward come to the conclusion that “violence begets violence.”

There are definitely some interesting aspects of “Glass,” but it ultimately fails to live up to its predecessors. It currently holds at 37 percent on Rotten Tomatoes, which competes poorly against the 62 percent earned by “Unbreakable” and the 76 percent that “Split” received. Overall, “Glass” does have potential, but it could have used more time and work if it were to excel against other films, including the ones in Shyamalan’s superhero universe.