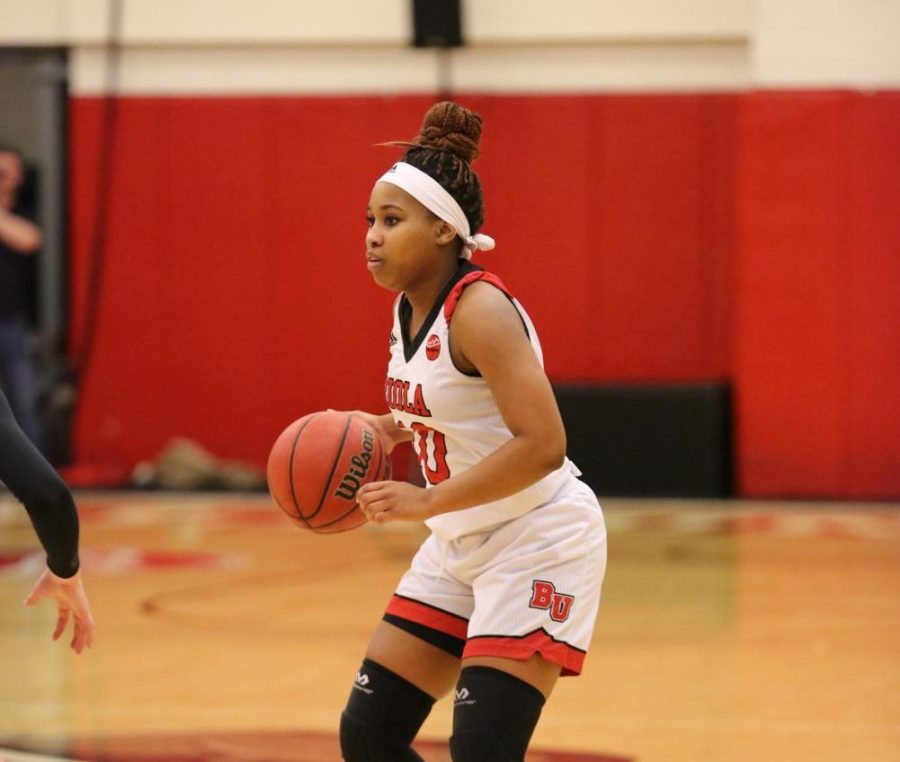 Junior guard Tatum Brimley dribbles during Biola's loss to APU on Dec. 15, 2018. The Cougars also won the rematch of the two rival schools on Jan. 19.

Biola traveled to archrival Azusa Pacific University on Saturday, hoping to return the favor against the Cougars following a rough loss at home to APU on Dec. 15. However, the script looked much the same as the earlier game, as the undefeated PacWest leaders picked up their 12th conference win with an 82-53 victory over the Eagles.
HOT START
The Cougars took control from the start and never relented, quickly pulling ahead 17-4 and closing the quarter out with a 22-6 lead.

Biola refused to give up though, as a three-pointer from sophomore forward Jazz Benn and a three-point play from freshman guard Danita Estorga closed the gap to 22-12. However, APU closed the half strong, hitting several shots from behind the arc to stretch the lead to 42-20 at the break.
NEW HALF, SAME STORY
The stifling defense from the Cougars stopped the Eagles, even more so in the third quarter, and Azusa’s offense continued to click as they scored the first 18 points of the quarter to take a 60-20 lead, which eventually became a 67-31 lead heading into the fourth quarter.

Despite the game being out of reach, Biola fought until the end and had their best quarter of the game in the fourth. Junior guard Brenna Khaw nailed a shot from deep, but APU took the game by a final score of 82-53.

Benn finished the game with a team-high 15 points, closely followed by junior forward Mikayla Greens with 13. Senior forward Sara Dougan led the team with five rebounds followed by Benn and Khaw with four.

The Eagles (8-9, 6-5 PacWest) will look to bounce back next Saturday at home against Fresno Pacific University at 5:30 p.m.