Personal growth, second chances, life lessons and friendship come together in this comedy-drama. 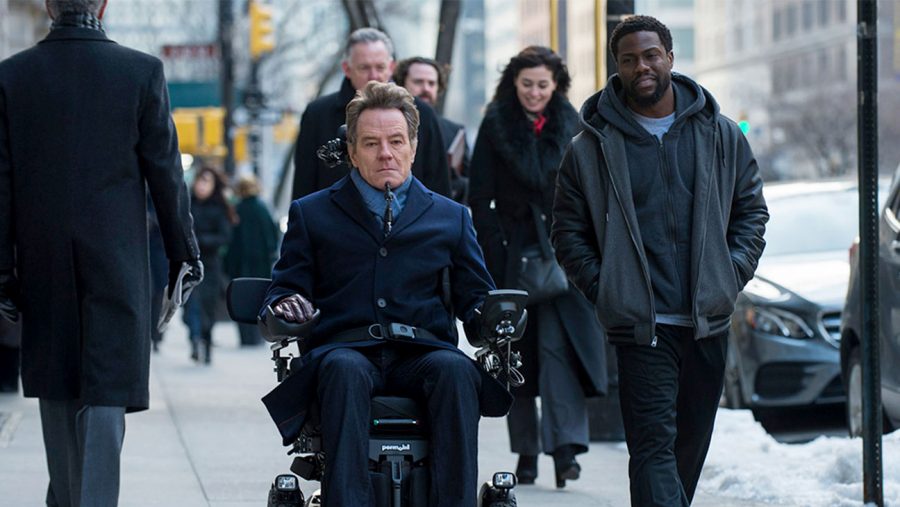 Kevin Hart’s movie career is littered with goofy comedies such as “Ride Along,” Ride Along 2,” “Jumanji,” “Get Hard” and countless similar movies, cementing his status as a giant in this genre. “The Upside” stands out among all modern comedies by demonstrating Hart’s surprisingly dramatic acting talents as well as his ability to simultaneously express his comedic side that we all know and love.
STORIES OF FAMILY AND FRIENDSHIP
Hart portrays Dell Scott, an ex-convict desperate to find a job. His complicated life separates him from his ex-wife and son, as he tries to prove to them that he is more than a former criminal. During his job search, Dell comes across Philip Lacasse, a billionaire with quadriplegia played by Bryan Cranston. Philip hires Dell to help the former get around, and the two eventually become more open with each other.

Philip later tells Dell the emotional story of his paragliding accident which led to his quadriplegia and his wife’s death, revealing his desire to end his life because of the guilt and pain he has endured. Dell becomes a blessing in Philip’s life, revealing to Philip that there is so much more joy in life than he perceives.

As they grow closer throughout the film, Dell attempts to break Philip out of his shell in different ways. There are times where the friendship suffers some damage, but as they start to realize that they are both responsible for making changes in their own lives, they are able to repair that damage.
CHANGING FOR THE BETTER
The biggest themes of the film revolve around everyday problems that we encounter such as pain, depression, stress and being haunted by the past. “The Upside” perfectly encapsulates the difficulty and the amount of work it takes to change for the better and move forward.

Dell and Philip are representations of the two mindsets that are available in life, with Dell representing the person that has suffered but who takes ownership for his past and continues to move forward. Philip, on the other hand, represents the opposite side of the spectrum. Haunted by guilt, pain and loss, Philip is an example of an individual trapped by the weight of his mistakes.

The biggest message of “The Upside” is that we as human beings have a choice. More specifically, we have a choice in how we perceive life, regardless of the hard times we have experienced. Hart’s character is an example of the person who makes the decision to make the best of his life.

To put it simply, “The Upside” is much more than a friendship story, as it contains valuable life lessons and examples on how we should and should not approach life. However, the combination of laughter and tears is what makes the film enjoyable. It will break through personal barriers while also allowing viewers to enjoy themselves.