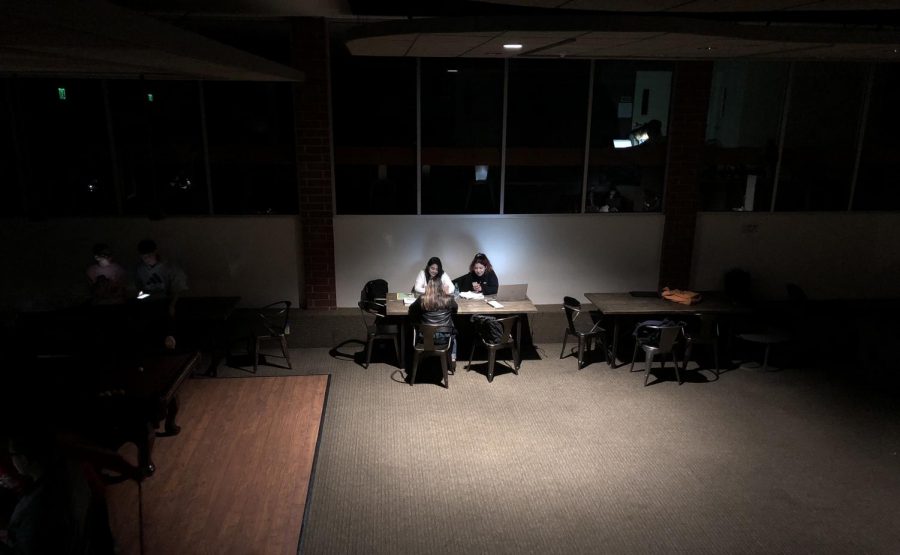 Students huddle under emergency lighting in the SUB during a power outage on campus on Jan. 16, 2018.

Power went dark across most of Biola’s campus at around 5:30 p.m. on Wednesday. Areas initially unaffected by the outage included the Production Center, the Lim Center and parts of the Grove. WiFi access was also affected, and service remained down in several areas after power was restored. Wired networks and phone lines remained operational, according to Campus Safety.

Power was restored to several parts of campus at about 8:20 p.m. Full restoration was still in process, according to Campus Safety.

Biola’s information technology department said at 10:20 p.m. that several campus buildings remained without WiFi, including Hope and Horton Halls, apartments on Rosecrans Avenue and the Caf.

[status] Investigating: A number of campus buildings are still without network connectivity as a result of the campus-wide power outage. A technician is on campus working to restore network/Internet service to the following buildings – th… https://t.co/CaasvmDgUF

As of 6:58 p.m., Campus Safety officers had checked all elevators on campus. Two elevators, one in Thompson Hall and one in the Science Center, had people trapped in them. Facilities management and the elevator contractor had freed the occupants of both elevators by about 7:47 p.m.

Adjacent communities past La Mirada Boulevard were also affected. Over 420 customers of Southern California Edison were affected outside of Biola, according to Campus Safety. The cause of the blackout has not yet been given.

At 6:08 p.m. Campus Safety sent out a notice that officers had been deployed to lower, middle and upper campus and that students with emergency needs should call (562) 777-4000. Resident Directors and Resident Coordinators were also present in their buildings.

Facilities management was working with Southern California Edison to restore power to campus. The school initially said power would be restored around 8:00 p.m., but at 8:10 p.m., Campus Safety sent out an alert that power would instead be restored between 9 p.m. and 10 p.m. All 6:00 p.m. classes were canceled, as was the AfterDark chapel.

Austin Green contributed to this report.