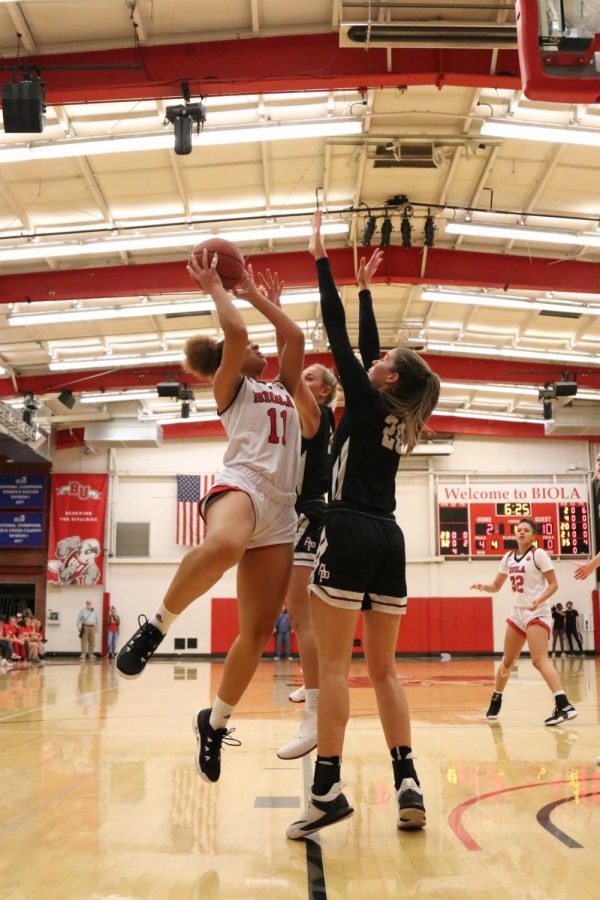 Photo by Thecla Li /THE CHIMES

Women’s basketball fell short against Azusa Pacific University Cougars on at home Saturday. The Eagles remain winless in Cornerstone Cup rivalry games, dropping to 0-3. The Cougars took the lead at the start of the game and Biola never threatened to take it back. APU collected its fifth conference win of the season as Biola lost by a final score of 81-55.

APU opened the first quarter by taking a quick lead and playing strong defense. The Cougars also scored 14 points in the paint and 10 points off of rebounds in the quarter. Biola struggled, only putting up nine points. The quarter ended with the Eagles trailing 23-9.

In the second quarter, the Cougars continued to dominate with a tough defense, forcing Biola to take many hurried shots at the shot clock wound down. Biola went into halftime behind 34-21.

“I think we were a little frazzled. Definitely didn’t play our best game today, but considering the way we played, I think we kept it really close and all the girls gave heart throughout the entire game,” said freshman guard Danita Estorga. “We didn’t play to the score. We played really hard and made those hustle plays when they needed to be made.”

The Cougars opened the third quarter with two nine-point runs, pushing the Eagles further behind. APU also stayed on top by scoring 15 points from the bench and 13 points off of turnovers. The Eagles fell further behind at the end of the quarter by a score of 64-31.

The final quarter proved the Eagles’ best, as they put up 24 points, including 12 points in the paint. At the end of the quarter, Biola went on an 11-point run, which helped ease the final score to 81-55.

“I love all the support we got. I’m extremely thankful for all the school does for us,” said senior forward Sara Dougan. “I’m truly thankful for everybody coming out. That was awesome. It makes a difference, believe it or not.”

Head coach Alan Nakamura reflected on APU’s play and revealed the Eagles’ plans for the rest of the season.

“Playing Azusa Pacific is always a really tough challenge and I think we were ready for it and looking forward to it,” Nakamura said. “So we’ll celebrate the good things we did and be humble and teachable and make adjustments and improve in areas we didn’t do well in, too.”

The loss moved the Eagles to 3-2 in conference and 5-6 overall. They will continue conference play at home against Point Loma Nazarene University on Jan. 2 at 5:30 p.m.