Three Eagles end the night in double digits in the win against Notre Dame de Namur. 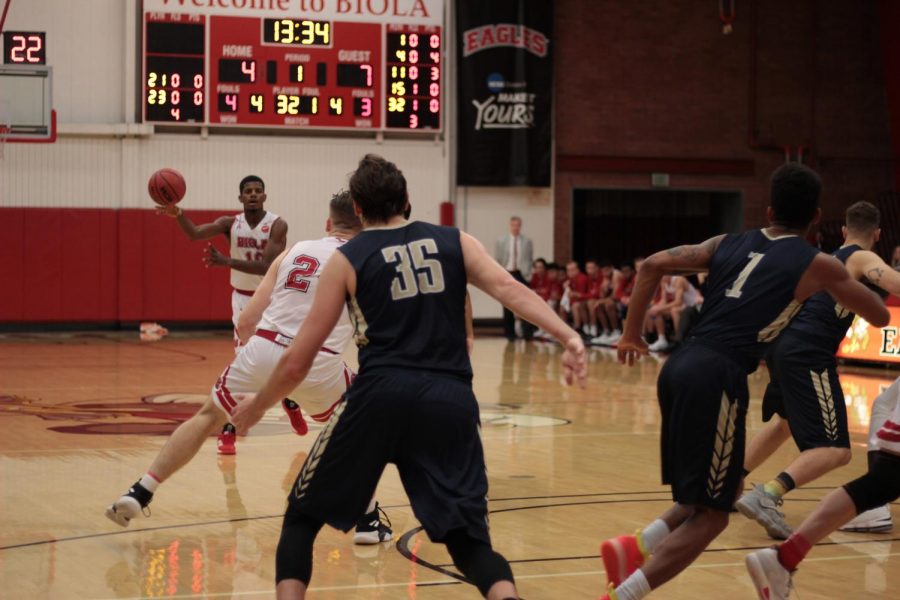 Men’s basketball fought its way to another victory in Chase Gymnasium on Thursday night against the Notre Dame de Namur University Argos in the Eagles’ first PacWest conference game of the season. The Eagles struggled to find a rhythm in the first half but came out in the second half with a newfound chemistry that propelled them to a 59-50 win.

Senior forward Alex Talma ended the night with another double-double, putting up 14 points and 12 rebounds. Senior guard Trevor Treinen contributed 14 points for the Eagles. Sophomore guard Michael Bagatourian also chipped in with 13 points to help seal the win.
EARLY OFFENSIVE STRUGGLES
The Eagles struggled to find a successful offensive flow at the start. Defense on both teams was strong, resulting in a scrappy first half. Notre Dame de Namur continued to get under the Eagles’ feathers by playing a full court press defense, keeping many of Biola’s shots from sinking. The Eagles went into the half down 26-22.

“In the first half we were playing kinda soft, and passive and not playing hard enough. But then at halftime, the coaches kinda got on us about playing harder, and we came out and did that in the second half,” Bagatourian said.
BIOLA LOCKED IN
The Eagles came out of the locker room evidently ready to change the energy of the game. Bagatourian got Biola going with nine of his points coming within the first ten minutes of the second half. Senior forward Levi Auble sparked a momentum shift in the game with a steal on the defensive end before going full court for the slam dunk.

Biola’s competitiveness forced multiple timeouts by the Argos as they could no longer find a way to score against the Eagles. Talma and Treinen stayed consistent all night, creating a steady offensive gain for the Eagles.

“I liked the grit they had, there were some frustrating moments in the first half, and they stuck with it, kept playing.” said head coach Dave Holmquist. “By spreading the floor and using a different offense it allowed us to penetrate more and that opened some things up for us.”

The Eagles (5-2) will continue PacWest conference play against Holy Names University on Saturday at 3 p.m. at Chase Gymnasium.