Handing out grades for how Biola’s five fall teams fared this year. 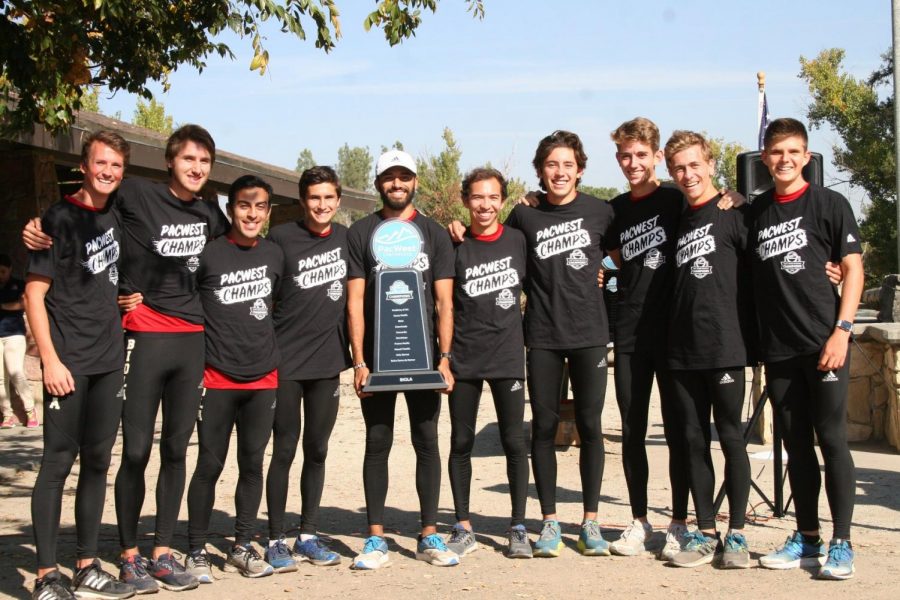 We have reached Christmas season, which also means finals season for us busy, tired college students. Most of us are probably starting to worry about grades right about now, if not outright freaking out about them. So in the spirit of the holidays, I give you the chance to take a break from obsessing over our own grades so we can hand some out to Biola’s fall teams, starting with the Eagles’ first ever PacWest conference champion.
MEN’S CROSS COUNTRY: A+
1st place PacWest, NCCAA national champion
What more could you have asked from this team? By the end of 2017, with a National Christian College Athletic Association championship banner in tow, it was clear head coach Sean Henning had the program on the verge of dominance. The Eagles’ peers in the PacWest conference recognized that coming into 2018. Both inside and outside the program, expectations were high for not just the team in general but also its individual standouts, chief among them being talented junior Gabe Plendcio. Fast forward a few months, and it is hard to find any major disappointments. Plendcio is now a bona fide star with a school record in the men’s 8k as well as an individual PacWest title to go along with his second straight NCCAA win.

That hardware extends to the team as well, which brought home Biola’s first-ever PacWest championship across any sport and another blue NCCAA national title banner. To top it off, Henning was voted PacWest coach of the year for his efforts. Success in collegiate athletics comes in a lot of different forms, but if you gauge it by hardware and banners, men’s cross country has become Biola’s premier program.
WOMEN’S CROSS COUNTRY: B
3rd place PacWest, NCCAA national champion
Like the men’s team, women’s cross country was voted first in the PacWest preseason coaches’ poll back in late August. Unlike the men’s team, they could not close the deal in the conference championships in November, taking third place as a team. But that should not diminish another solid year that signals a bright future for some of the Eagles’ best young runners. McKenna Mason was a revelation in 2017 and took another step in her sophomore season with a first team all-PacWest nod. Mason paced her team in every race she ran this year, including a third place individual finish in the NCCAA national championships to lead her team to their first national title banner.

Freshman Clara Haynes also showed promise, separating herself from her fellow newcomers with consistent solid times, especially as the season progressed. And in what now seems like a yearly tradition, a senior shone bright to end her Biola career in style. This time around, it was Emily Ransom, whose name became a staple on the individual leaderboard throughout the entire year. Still, the major storyline of the season—besides, you know, that blue NCCAA banner that will soon hang in Chase Gymnasium—is Mason’s continued progression, as she looks well on her way to stardom halfway through her collegiate career.
VOLLEYBALL: A-
2nd place PacWest, NCCAA Tournament bid*
Aaron Seltzer’s veteran team proved, unsurprisingly, that they could go toe-to-toe with anyone else in the PacWest. Even though the Eagles came up just a game short of living up to my [admittedly] bold prediction that they would win the conference, they still cemented the program’s place in its top tier. Two second place finishes in the first two years membership is a pretty good way to announce your arrival, and they are not done yet, heading to Missouri this week to defend last year’s NCCAA championship.

It also helps when senior middle blocker Sierra Bauder blossoms into a superstar and beats out Azusa Pacific’s Julianne Miller, the preseason favorite, for PacWest player of the year. Bauder’s .440 hitting percentage this season gave her a conference record, and according to the PacWest, was second-highest across all of NCAA Division II. Bauder also joined Miller as the only two PacWest representatives on the American Volleyball Coaches’ Association Division II all-region team.

What ultimately powered this team, though, was its depth, and the ability of pretty much every starter to step up and take over on any given night. Redshirt sophomore outside hitter Christina DenBoer was finally healthy enough to take the court consistently for the first time since 2015, and was also named first team all-conference for her efforts. She became the only Eagle to average over three kills per set with 3.16, and the only non-libero to average over two digs per set with 2.31.

Speaking of liberos, sophomore Sami Hover lived up to her potential in her first year as a starter, averaging an incredible 4.68 digs per set and getting a second team all-conference nod. Hover and DenBoer will return, but Seltzer will now have to replace several high-usage seniors such as Bauder, setter Brinley Beresford and opposite hitter Karly Dantuma.
Men’s Soccer: C+
5th place PacWest, Eliminated from NCCAA play
Before BUMS fans react like Ralphie from A Christmas Story did when he got his paper back— “C-plus? C-Plus?!”—let us remember that Todd Elkins had the unenviable task of replacing half of the previous year’s starters in 2018. Still, it stings to once again have just missed out on postseason play. The Eagles’ fifth-place finish comes just as Biola’s self-imposed qualifications for NCCAA eligibility were raised from a top-five conference finish to top-three, only one year after the Eagles finished sixth in the PacWest.

The back line was easily the team’s biggest strength, a huge feat since senior co-captain Parker Setran was the only returning starter there. The Eagles still do not have a clear starter at goalkeeper, as redshirt sophomore Alex Muir battled injury throughout the entire year and transfer junior Luis Rodriguez struggled at times during his first season as an Eagle. The offense underwent the most change, and it showed, scoring just 24 goals on 221 shot attempts on the season, giving Biola a goal differential of zero despite allowing 40 fewer shots.

That said, silver linings can easily be found from this past season and in looking towards the future. Junior defenders Jake Munivez and Axel Van Cleve saw heavier minutes than ever and were a huge factor in that back line’s success. Junior Leo Thompson, another transfer newcomer, accounted for 11 of those 24 goals, essentially carrying the offense. In their first seasons as Eagles, freshman Oscar Rubalcava and redshirt sophomore Atu Galadima also impressed, notching two goals each. The Eagles will miss Setran and senior midfielder Kousei Mattox, but the foundation for next year’s squad is already very much in place.
Women’s Soccer: B+
6th place PacWest, Eliminated from NCCAA play
Posting a winning record in conference might seem expected at this point for Erin Brunelle’s squad, but to do so while two of the Eagles’ best players—defender Maddy Brown and goalkeeper Christina Rodriguez—missed the entire season is downright impressive. Rodriguez might not even be guaranteed a starting job when she returns, which was unthinkable at this point last year. But that shows how ridiculous freshman keeper Viviana Poli was this season, and junior Alyssa Joel was no slouch either.

Meanwhile, junior forwards Annmarie Alvarez and Sarah Jeffries took bigger roles in the offense, and capitalized with six goals each. Right behind them, junior forward Paula-Marie Labate added three goals of her own, and junior defender Colie Martin did well in Brown’s role as the do-everything defender and playmaker. Not to be outdone, the Eagles got solid performances from several young players, such as sophomores Madi DeMetropolis and Jessica Penner and freshmen Sierra Rangel and Rachel Melvin.

It all adds up to a solid building year towards what looks like, on paper, one of the best women’s soccer teams in school history in 2019. When I came in as a freshman, alongside several current stars of the team, the program was a juggernaut, going undefeated until a brutal loss in the conference championship game. During my—and their—senior year, it might be even better. Go Eagles.