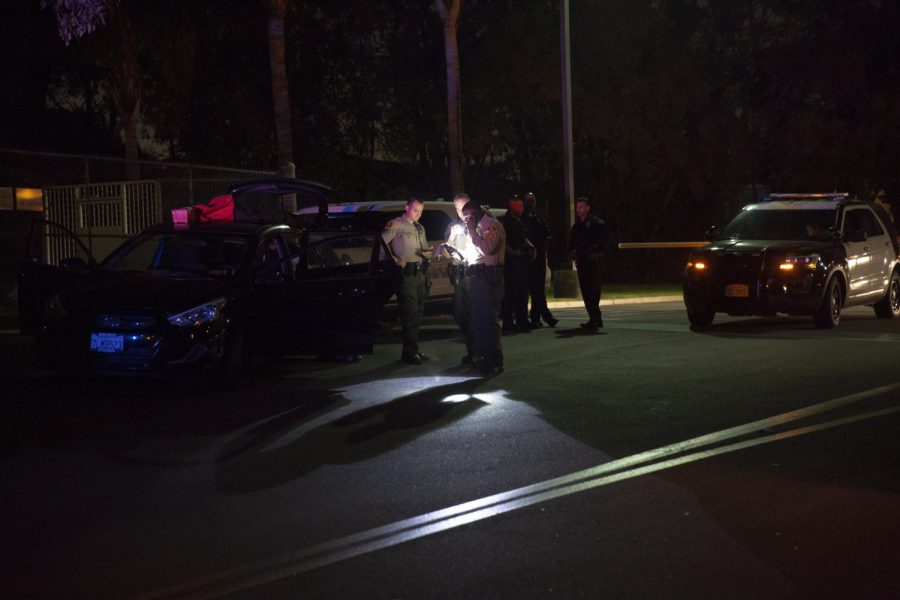 Los Angeles Sheriff's Department personnel examine evidence after arresting a man suspected of bringing a gun onto campus on Nov. 20, 2018.

UPDATE NOV. 20, 9:30 P.M.: This article was updated with information concerning the individual’s name, age and release from law enforcement custody.

A man was arrested by Campus Safety and the Los Angeles Sheriff’s Department near the La Mirada Boulevard entrance Tuesday night. Ben Coffman was charged with coming onto campus with a gun but was later released, authorities said.

Coffman, whom Campus Safety Chief John Ojeisekhoba describes as a man in his 50s, had a concealed carry permit from Orange County, but the California Penal Code prohibits non-law enforcement members from bringing guns onto college campuses even if they have permits, according to Ojeisekhoba.

“We had a call from the gate attendant, who recognized a male—older male,” Ojeisekhoba said. “The male, about a week ago, had come by there and asked if the campus was a gun-free zone. The attendant told him, ‘Yes, gun-free zone—you can’t carry a weapon on campus.’ The gate attendant then notified a [Campus Safety] officer. Before the officer got there, the individual had taken off.”

According to Ojeisekhoba, Coffman came back at 6:20 p.m. on Tuesday, when the same gate attendant recognized him and alerted Campus Safety. The LASD responded to campus and confirmed Coffman had a handgun concealed on his side.

A mass text sent via Biola’s emergency alert system at 7:20 p.m. said that the campus was not at risk. The La Mirada Boulevard entrance was closed for a brief time while law enforcement handled the situation.

According to Ojeisekhoba, the man appeared to be living out of his car and claimed he planned to go on a run on the track around Al Barbour Field.

“He said he wanted to come and run on the track, but you don’t run on the track with a pair of jeans and a button up shirt and shoes, Ojeisekhoba said. “So, that’s what we’re still trying to sort out here.”

At this time, it is unclear whether the man has any connection to Biola.

The LASD will follow up with the case. Ojeisekhoba believes Coffman will heed the trespassing warning and his ban from campus and that he does not pose a threat to the Biola community.