In a season highlighted by an NCCAA Championship title, women’s golf bears witness to a first-year player beyond her years. 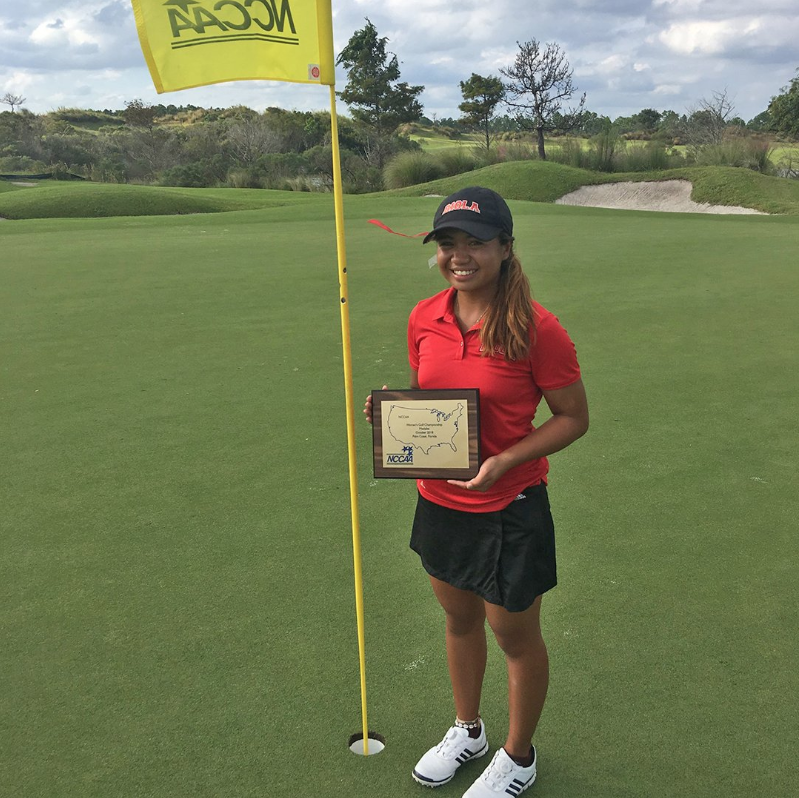 At this year’s National Christian College Athletic Association Championship in Palm Coast, Florida on Oct. 24, freshman golfer Sami Penor was tied for first place after 54 holes of play. Head coach Jane Carr knew there would be a sudden-death playoff, but wondered about the first-year standout’s ability to handle the pressure of what was undoubtedly the most important hole of Penor’s young career.
Witnessing A Special Talent
“On the first playoff hole she hit a great drive, but ended up pin high in a greenside bunker on her approach shot,” Carr said. “With not much green to work with, she stepped into the bunker and stuck it four feet from the pin in front of a crowd of spectators.”

In that moment, Carr knew for certain that she was witnessing a special talent.

Though Penor had been a revelation for Biola women’s golf all season long, the stigma and expectations typical for first-year athletes weighed slightly on the minds of many during the critical hole. But as she has done all season, Penor rose to the occasion and not only captured the individual title, but helped women’s golf win its first national championship in program history. To both her coach and fellow teammates, it became clear that Penor was no ordinary freshman.

“I think most first-year players tend to be nervous at tournaments, especially a national championship,” said teammate and junior Alexis Gopfert. “Sami mentioned to me a few times how she was very nervous, but I am proud of her how she didn’t show it on the course—she is a composed player and has really learned to channel her nervousness [and] I respect that a lot.”
Playing Beyond Her Years
Carr echoes Gopfert’s sentiment, and admits she forgets Penor is a first-year player, suggesting that the 19-year-old, who has been playing competitive golf since the age of eight, carries herself like a veteran.

“She is able to manage her emotions in such a mature manner, something you don’t always see in freshmen,” Carr said.

Penor’s demeanor was not always this composed. In fact, the Henderson, Nevada native’s story of ascension does not occur without the self-doubt and anxieties experienced during the beginning stages of her transition into collegiate play.

“The first few qualifiers I did not play well,” Penor said. “There was a moment where I thought maybe I was not going to qualify for the first tournament.”

However, as shown through the subsequent results, yielding to pressure is not a part of Penor’s game. The star freshman would make an anxious call to her father—her personal coach—who then drove down to help his daughter with confidence and trusting her swing. To no one’s surprise, Penor prevailed in the next two qualifying rounds, which allowed her to travel with the team for the first event, and the rest was history.
A Humble Mindset
Considering the success and attention that has showered Penor, teammates praise her for her humility and thoughtfulness, both as a golfer and as a friend.

“[Penor] is the same sweet person on and off the course,” Carr said. “She is a very kind and humble person, and while she might be at the top of the leaderboard, she is also the one that you are most likely to find in the back seat of the suburban. She always has a smile on her face and really looks up to and shows a lot of respect for her teammates.”

Penor’s devotion to her teammates and team-driven mentality is rooted within a piece of advice her high school coach once gave her.

“Golf is a very individual sport,” Penor said, quoting her high school coach. “However, high school and collegiate level golf is the only time when you get to play for something greater than yourself.”

Traveling has allowed Penor build deep relationships that go beyond the golf course. In fact, she has leaned into junior Tori Roeske the most, who has played a big role in Penor’s grounded approach. Penor mentions that Roeske reminds her all the time that even if a shot or an even entire round feels like a failure, her score does not define who she is and the whole team who supports her regardless.

“Golf is both an individual and team sport,” Carr said. “I believe that success breeds success and Sami has certainly raised the level of performance on the team. Everyone has stepped up their game this season and I think that bringing in players like Sami helps push everyone toward their potential.”

Penor’s game is not flawless by any means, but there is the belief within the team that by the time she graduates, Penor has the potential to become one of the best golfers in program history. Though she needs to refine her course management, short game and knowledge of the rules of golf, according to Carr, Penor has already proven to be a unique talent who has lifted her team to new heights.

When she committed to Biola in January last year, Penor stated that her goal was to “play a part in someway helping Biola Women’s Golf stand out.” Penor has certainly started off on the right foot.