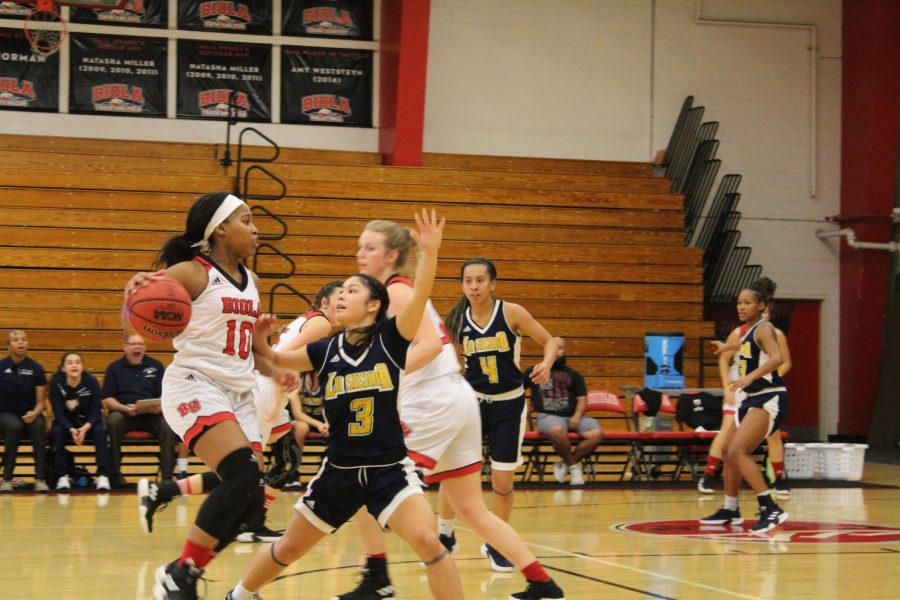 Photo by Marlena Lang / THE CHIMES

Women’s basketball grabbed its first victory of the year in its fourth game, a nonconference matchup against the La Sierra University Golden Eagles. The game took off quickly with Biola taking the lead and holding it till the end. With the win, the Eagles broke their three-game losing streak and set a new season best with a final score of 86-54.

Biola flew out of the gates at the start of the first quarter with a three-point shot by junior guard Tatum Brimley. After that, the Eagles held the lead with several more clutch shots while the Golden Eagles fell short. Biola also scored 12 points in the paint and 10 fast break points in the quarter alone. The first quarter ended with an Eagles lead of 25-15.

In the second quarter, Biola pushed a tough defense on the Golden Eagles, only allowing them 10 points and grabbing 15 rebounds in the quarter. The Eagles led at halftime 40-25.

Sophomore forward Jazz Benn led the team with 13 points and 10 rebounds on the night.

“As a team [we want to] to work better together… and get more stops on defense,” Benn said. “My teammates were still there and supportive, and… we played good defense.”

“The number of assists really showed that we were playing like a team,” said head coach Alan Nakamura. “We’re continuing to work and build and adjust and get better everyday and then we’re gonna try to hit the PacWest conference.”