The mass shooting at Borderline bar captures national attention as students from the area grapple with overwhelming loss. 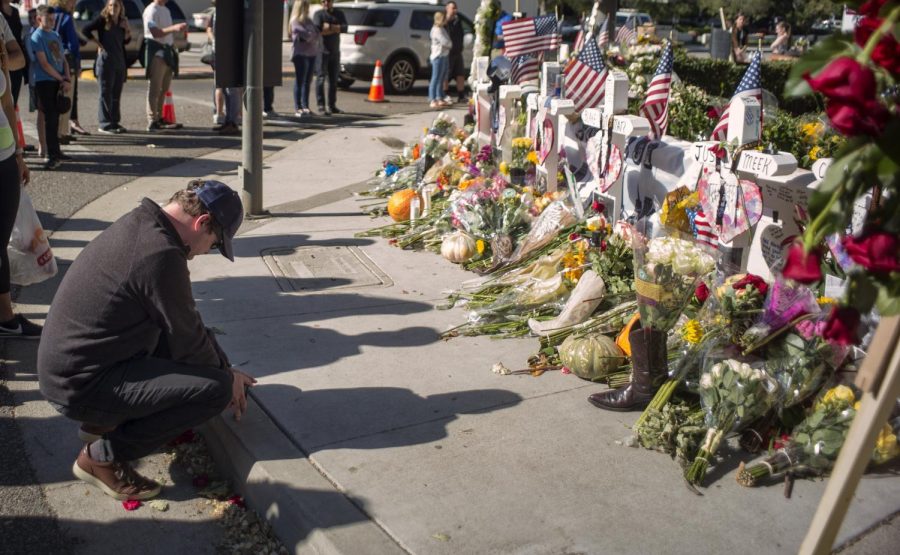 It was country college night at the Borderline Bar & Grill in Thousand Oaks when former U.S. Marine David Long took the lives of 12 individuals in addition to his own in the second mass shooting to occur in the country in under two weeks. The tragedy has seeped its way into Biola as students from the Thousand Oaks area are forced to confront national headlines involving their hometown, friends and family.

“I think just with these terrible events like this…  you definitely see it in a different perspective when it comes to your area. You never really think it’s going to come to your home until it does,” said junior business major Joey Cohen.

Although the mass shooting took place on Nov. 7, the impact remains fresh for many Biola students as the affected community has come together to mourn the extraordinary loss. The grieving process was disrupted by yet another tragedy on Nov. 8 as the outbreak of the Hill and Woolsey fires caused further turmoil not far from Thousand Oaks. With barely any time to mourn the victims, the Thousand Oaks community and residents from surrounding areas are faced with what are being called the deadliest wildfires in California history.
TRAGEDY FELT ON CAMPUS
For students from Ventura County, the violence struck very close to home. In the days that followed the event, students reached out to friends and family for support as they processed the shooting.

“I was shocked. I found out the next day on social media and all my friends were posting about it,” said junior nursing major Katherine Kenton.

Senior public relations major Elise Posey expressed disbelief after discovering Thousand Oaks, known for being a relatively safe town, had been the target of a mass shooting.

“It’s really devastating to see your hometown as the headline for such devastating and tragic news and that’s never something that you think is going to happen,” Posey said.

Those who could return home did so to seek support from their home community.

“I went back for one of the vigil services for one of the victims,” said senior political science major Nathaniel Seeba. “I was there for that and that was really good. Just a nice little service for him. Tough to see friends and family hugging and weeping and everything, but it helped to be there.”

Seeba, a resident of Camarillo, was connected to some of the victims, including the Ventura County Sheriff’s Sgt. Ron Helus, who has been deemed a hero by local and national media for likely saving many lives as one of the first responders. Seeba’s father, who had served on the VCSD for 33 years, was partnered with Helus for a short time during their careers.

In the wake of the shooting, the community in and around Thousand Oaks has come together to support one another through this difficult time.

“Being from Camarillo and having that connection to it, I’ve been able to see the human interaction of people and there’s not [an] agenda attached,” said junior journalism major Cooper Dowd.
FACING THE FIRES
With massive, deadly wildfires currently blazing their way through regions in Northern and Southern California, some of the attention has been taken off the shooting and focused on the more imminent danger to some of these already-grieving communities posed by the raging flames.

“[It’s] just a really interesting dynamic with everyone trying to process what had happened the night before amidst all the fires going on throughout the county,” Seeba said.

For some, the amount of tragedy concentrated within such a short time frame has caused a whirlwind of bewilderment.

“I was working so hard trying to support my friends from TO in light of the shooting and then on top of that all of the sudden they’re told, ‘Hey you might have to evacuate your house.’ And some of them did lose their homes,” Dowd said.

The fires have even prevented some students from going home.

“Something that’s really tough is―because of all the fires I wanted to go home this weekend, because obviously you just want to go home to be with your family, but because of the fires literally every single road to Thousand Oaks is closed,” Posey said.
COMMUNITY AND SUPPORT
Various campus departments have offered their support to affected students through this time.

“We here at the BCC are more than open to hearing what students may be needing―whether it be a group setting to process and not feel alone in their grief, and of course individual therapy is always available,” said Melanie Taylor, director of the Biola Counseling Center, in an email.

Students have also seen support from other campus staff.

“My RD [Resident Director] immediately sent an email out that night… about it. He listed all the resources for students who were impacted by it and I found that was really beneficial,” Dowd said.

As the reality of the events are sinking in, those affected have expressed a need for healing and empathy from their nation rather than using the situation as an excuse to bolster a political agenda.

“There’s a lot of change that can be done in this world but right now as citizen of Thousand Oaks, I would more appreciate consolation in terms of being sad, grieving for the families, praying for them and things like that rather than, ‘Oh I’m so sorry this happened, clearly we need to vote,’” Posey said.