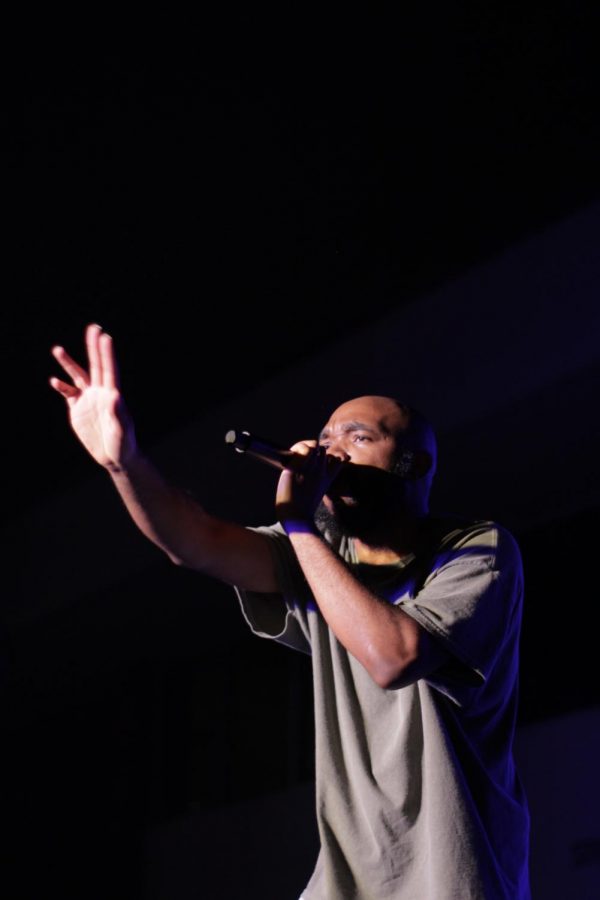 On Thursday, Nov. 15, hip-hop collided with free pizza, live graffiti art and layered lyricism at Student Programming and Activities’ 2018 edition of Sola Soul. The whole night was steeped in talent and entertainment—from Upper Room’s impressive rap performance to Saint City Session’s inspired breakdancing to S.O.’s hip-hop commentary, this year’s Sola Soul was as entertaining as it was thoughtful.
BIOLANS GOT BARS
Biola’s hip-hop club, Upper Room, opened the night with rhythm and energy, rotating the audience through the lyrical versatility of their diverse group. For many student rappers, Sola Soul is the ultimate expression of a beloved hobby, allowing them to showcase their bars, express their passions and experience the hype of the crowd.

“Rapping is just a hobby of mine,” said Jarrett Carpenter, junior business major. “I go to Upper Room every once in a while [and] it’s just fun to mess around and rap and I really like just getting hyped. I love music so it’s mostly just about having fun.”

This fun was certainly evident as The Upper Room was clearly the highlight of the night. Their performance had the largest turnout as audience members danced, cheered and rapped along with their fellow students. For senior elementary education major Ashley Pagmanua, it was the ultimate opportunity to see her friends’ passion and dedication come to full realization.

“I loved [Upper Room],” Pagmanua said. “I thought it was pretty hype––I thought it was hella cool. I hear them rap all the time in the apartment, so it was cool to see them on stage with music and a crowd.”

More than bringing fun, however, the Upper Room performers also layered complex messages about social issues and faith in Christ through their rhythm and bars.

“It’s not something I would like to pursue as a career, but it is definitely something that I have an outlet in and basically whatever I’m feeling, I write it,” said Savon Santana, senior film major. “Usually, it’s either about social issues or how I’m feeling, and then I’ll just put it out there.”

Alumna Christina Conrad, who is currently pursuing her teaching credential, used this performance as a platform for a more specific message about God’s grandiosity.

“[My message], particularly today, was about how big God is and how ridiculous fear is when we realize that he is working everything together for good,” Conrad said.
BREAKDANCE FOR JESUS
Following Upper Room’s rap performance, Santa Ana-based breakdance crew Saint City Session brought back-breaking dance moves and an overt but strong message about Christ. While their three-person group of middle-aged dancers was much older than Biola’s college crowd, their performance broke through generational barriers as students cheered them on and even joined them on the dance floor. For crew leader Don Sevilla, this performance was all about glorifying God.

“[Breakdance] is a way to glorify him in terms of understanding and knowing that God gives us gifts,” Sevilla said. “Creative gifts such as painting, or singing or musical instruments––it’s his call to use those gifts to honor him and give him glory. Not only that, [dancing] is a very powerful medium of expression that connects us to others around us. As soon as we start dancing, people see us, so what it does is it builds a bridge between us and the people.”
CHRIST INSPIRED LYRICS
To end the night, international rapper S.O., short for Seun Otukpe, brought an inspired performance, hoping the crowd would think deeper about his lyrics. The veteran rapper, whose second album “So It Continues” reached fifth on the iTunes hip-hop/rap charts, thoroughly entertained as he skillfully glided through each beat and rhythm. While S.O. is certainly a talented rapper, he also believes he can inspire crowds through the songs he produces.

“When Christ saves you, he doesn’t take away the bad cultures,” S.O. said. “Rap is literally poetry. You find poetry in the Bible. What we’re doing is rapping poetry over a beat. That’s the simplest form, rhythm and poetry. It didn’t really take much thought in the sense of, I became a Christian, I was able to put words together and I wanted to convey what I believed through music.”

Ultimately, he hopes to encourage listeners to continually seek Christ’s love and acceptance when contemplating personal worth or value.

“A lot of people can fall into even your college being an idol and your career being this and being that, but seeing Christ as the ultimate joy––that’s what I want people to leave [with],” S.O. said. “Apart from anything else, he is what matters, what he’s done and who we believe in is what matters.”