The woman behind the Special Olympics at Biola

The Biola tennis courts serve as the ground for awareness and acceptance by welcoming challenged athletes. 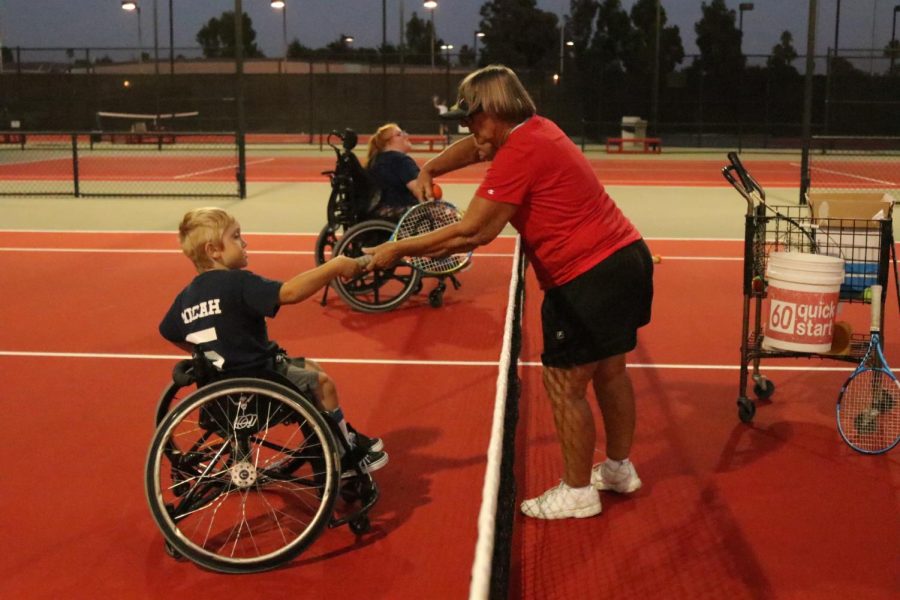 Coach Dee Henry is the former head of women’s tennis at Biola, a member of the board of directors for the Intercollegiate Tennis Association, still teaches undergraduate tennis PE courses and has worked with challenged athletes for over two decades, but at the center of all of that is simply a woman who says her passion is to serve God.

“The church is mandated to help. It’s not the government’s job, it’s the church’s job and that is the power of a witness,” said Kristi Grimm, a Biola alumni and former wheelchair athlete who serves as assistant coach. “Coach Dee isn’t here for profit or to witness to you, she’s just here because she cares.”
THE BEGINNINGHenry’s journey with challenged athletes started back in 1978 when she met Brad Parks, the founder of wheelchair tennis. He encouraged Henry to join in his journey of introducing tennis to wheelchair players.

Though intrigued, Henry’s official involvement with the community did not come until 1986, when she met her first wheelchair athlete, a child from her church named Scott Barron, who was committed to a wheelchair for life at the age of two. Henry’s heart for the disabled emerged as she started her first few coaching sessions by just having him hit a balloon with a ping pong paddle.

Soon after, Barron told Henry something that committed her to helping the challenged for life.

“He said to me, ‘I feel like a regular kid.’” Henry said. “Once a child says that to you, there’s no way you’re stopping, ever.”
BIOLA CONTRIBUTES TO HENRY’S CAUSEIn 1990, Henry and her team opened a wheelchair clinic for physically disabled athletes. Due to its success, Henry says the clinic was featured in a newspaper article which vaguely reported that it aided “disabled” tennis players. This created the misconception that Henry’s team also served intellectually challenged players. However, Henry says the report was a hidden blessing which led her to her first intellectually challenged athlete, the son of a Biola alumni who had read the paper.

Biola eventually became more involved in the ‘90s when kinesiology professor Connie Sarver saw Henry’s work and assigned her students to support Henry with the program as assistant coaches.

Henry currently holds weekly training sessions as well as a summer tennis program for the athletes on Biola’s courts. In 2002, Henry got connected to the committee behind the Special Olympics of Orange County and has been working with them ever since. The Special Olympics committee provides year-round sports training and athletic competition in multiple Olympic-type sports for both children and adults with intellectual disabilities.

“It gives them a goal to work towards,” Henry said. “At the end of the day, if they don’t enjoy the competition and are just there to have fun, that’s fine too.”

Henry’s efforts did not fail. In 2015, Biola hosted the 2015 Special Olympics World Games, which included housing close to 400 challenged athletes as well as delegates from Russia and Macau.

Henry sees Biola as the perfect fit for her vision with the players.

“The mission of Biola University is biblically centered education, scholarship and service,” Henry said. “Biola’s goal is to equip men and women in mind and character to impact the world for the Lord Jesus Christ. If working with challenged athletes does not fit the word service then I don’t know what does.

Henry also sees her program as something that can be replicated elsewhere no matter where her students go after Biola.

Henry also hopes to someday pass the torch of leading her program.

Henry’s mission is to recruit at least two peoples who enjoy serving disabled individuals. Those two would then go on to complete their head coach certification. She hopes this process would repeat itself and lead to a self-sustaining structure.

“All I did was plant the seed, and with God’s blessings it multiplied,” Henry said.

CORRECTION: An earlier version of this article referenced Dee Henry as the current women’s tennis coach at Biola. Henry retired from the position in 2016.