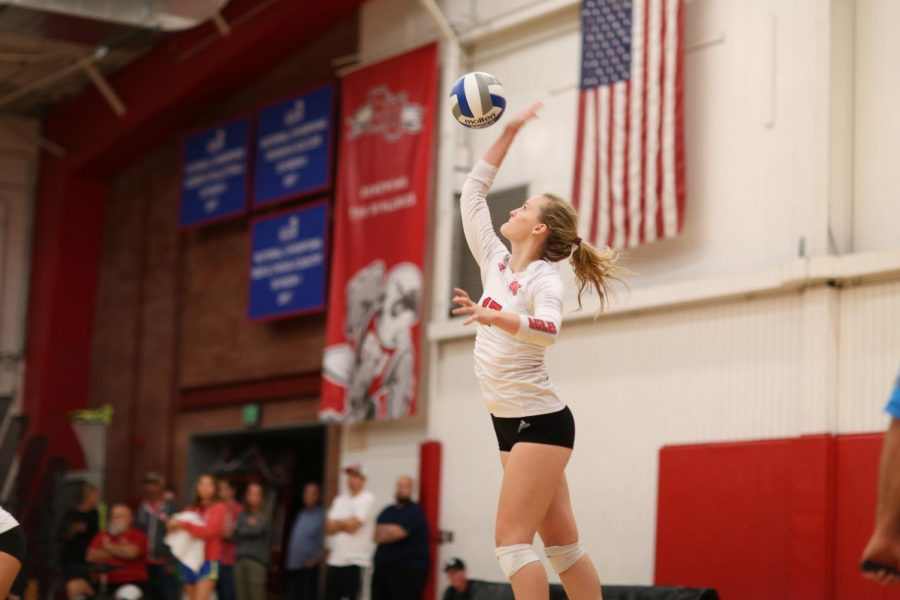 Photo by Abram Hammer / THE CHIMES[File]

Volleyball hosted the NCCAA West Regional Championship in Chase Gymnasium on Tuesday, playing a semifinal game at 9 a.m. and the championship game at 7 p.m. In the morning game, the defending NCCAA champion Eagles rolled over New Hope Christian College in straight sets, and they booked a trip to this year’s NCCAA tournament in Point Lookout, Missouri from Nov. 29-Dec. 1 with a sweep of Ottawa University in the nightcap.

“We played really well and came together as a team. Everyone played well and there was no weakest link,” said sophomore middle blocker Bekah Roth.
EARLY START
In the morning game, Biola showed its superiority even with several starters resting, as senior opposite hitter Stephanie Jewett and sophomore outside hitter Savannah Hilde led the team to a 25-8 first-set win.

The second set was closer, but the Eagles were still able to come away with the 25-20 win as Hilde continued her strong offensive play.

The third set was not even close, as the Eagles recorded five aces en route to a stunning 25-4 victory and the match win. With the win, Biola advanced to the championship to take on the Ottawa Spirit.

“The energy in the first game this morning was really good. These are teams we haven’t seen and have no film on, so it’s just roll the balls out and play. You’re just trying to play catch up and see what things look like at that time,” said head coach Aaron Seltzer.
CONVINCING VICTORY
In the night game against Ottawa, the Eagles took the first set 25-17, led by four kills from senior opposite hitter Karly Dantuma.

The second set was much closer, but Biola came out on top 25-21 as Dantuma continued her strong play from the first set, and Hilde kept up her strong hitting from the morning game.

A strong combo of Dantuma, Roth and Hilde led the Eagles to a sweep as they hammered the Spirit 25-13 in the final match-clinching set.

“The transition side of things is what we’re gonna need to prepare for,” Seltzer said. “We’re gonna see different types of volleyball. Tonight was a different type of volleyball than we saw in the PacWest. Having seen it last year, though, we have an idea of how to go into it.”
STRONG OFFENSE
Hilde led the offense in the first game with 14 kills, followed by senior middle blocker Sierra Bauder with 10. Sophomore setter Vanessa Garcia tallied 38 assists and sophomore libero Sami Hover tallied 15 digs.

In the second game, Dantuma led Biola with 11, while Roth and junior outside hitter Sabrina Winslow put up seven kills. Garcia recorded 32 assists to go with Hover’s 12 digs.

The Eagles now sit at 23-6 overall and remain 17-3 in the PacWest. They will be back at home on Friday to take on Holy Names University in their second-to-last conference game of the year at 7 p.m.