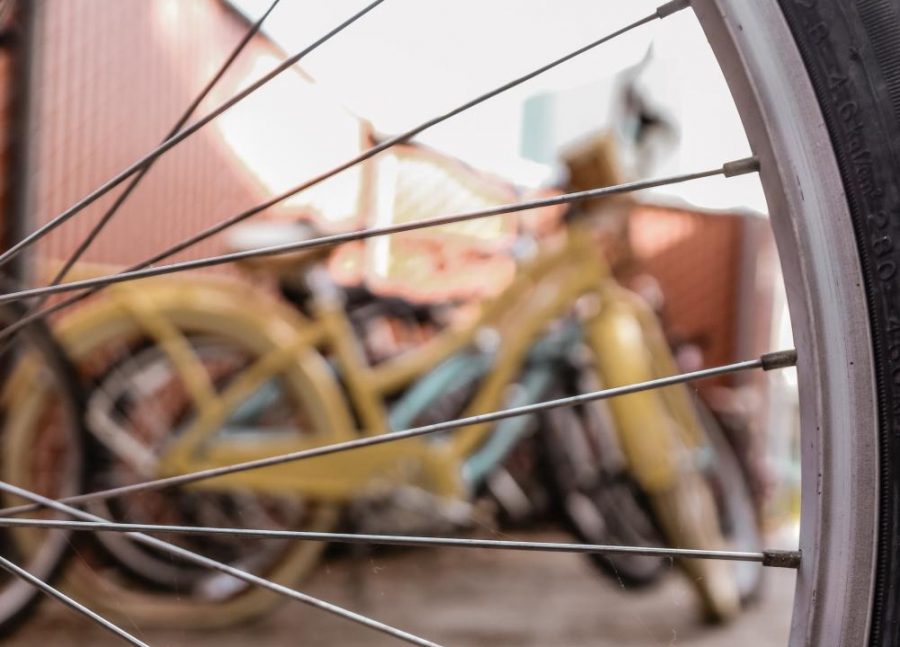 Photo by Thecla Li / THE CHIMES

This story was originally published in print on Nov. 1, 2018.

Daisy Krigbaum has had her bike stolen. Twice.

The most recent theft occurred on Sept. 30 in the middle of the day. The junior philosophy major says that although she had a U-lock for her Schwinn mountain bike, she was late to a meeting so she left her bike unsecured at the racks near the mailboxes. When she came back shortly afterwards, it was gone.

“[It] seemed a little heartless to me until I got my bike stolen, the fact that [Campus Safety] would tell you to look out for people who seemed like bike thieves,” Krigbaum said. “And then I was like ‘Oh, I guess if I had heeded their advice I wouldn’t have put myself in this position.’”

As a commuter, Krigbaum says she bikes at least seven miles a day, so losing the bike was a major loss. A new one would have cost her over $200. She reported the crime to Campus Safety, who discovered about a week later that another student had stolen the bicycle. Krigbaum got her bike back and decided not to press charges against the student.

She also had a bike stolen last year in a similar situation—the bike was unlocked and unregistered, and disappeared one day. That bicycle was never recovered.

“I feel less safe about [my bike] now,” Krigbaum said. “But I feel more confident in my ability to deter thefts simply by locking the bike.”
BLACKSTONE A HOTSPOT FOR BIKE THEFTS
Krigbaum is not the only student with bike safety on their mind. There have been 14 bike thefts this semester, a number similar to last October’s, according to chief of Campus Safety John Ojeisekhoba. Yet Krigbaum’s situation is somewhat different. Many of the thefts have been committed by transients, not students, and several of the bicycles were locked.

The area around Blackstone Hall remains particularly vulnerable, Ojeisekhoba says. With lower campus recently walled off, thieves have targeted upper campus because of the multiple entry points by the creek and tunnel.

“They’re like annoying ants. I don’t mean to dehumanize them… [but] the bigger problem that I see is they’re a threat to public safety,” Ojeisekhoba said.

Ojeisekhoba believes securing a bike helps deter potential thieves. While it may take minutes to cut through a U-lock, someone can slash a cable lock in seconds. Because of this, Campus Safety will likely require students leaving their bicycles in high-risk areas to use a U-lock. Campus Safety has also purchased 100 U-locks that students will be able to borrow for free.

Campus Safety also has help in dealing with the bike thefts. Sgt. Alfred Salazar of the Los Angeles Sheriff’s Department says his team partners with Campus Safety to conduct surveillance at Biola. In August, a tip from Campus Safety helped the LASD find a stash of over 20 stolen bicycles, three of which were from Biola.

“It is our goal to pick them off, one by one,” Ojeisekhoba said.
ARRESTS REMAIN DIFFICULT TO SECURE
In many cases, however, recovering a bicycle is difficult, Salazar says. Though the LASD has identified two people suspected of theft, deputies have not been able to find them, as they do not have an address where personnel can contact them. While there are some homeless encampments in La Mirada, many transients move from place to place.

For now, deputies will maintain surveillance efforts with Campus Safety, Salazar says, though Ojeisekhoba notes that his limited number of personnel makes surveillance a challenge. The LASD has also had some success catching the thieves trying to sell the bicycles online.

Yet Ojeisekhoba believes there is a deeper issue behind these recurring petty thefts. He says California legislation is too lenient, failing to deter minor crimes such as bike theft. California Proposition 47, which was passed in 2014, reduced the penalty for a number of “nonserious and nonviolent drug and property crimes.”

Salazar also believes that crime rates have increased because under the proposition, the theft of a bike valued under $950 and the possession of heroin or methamphetamine are considered misdemeanors.

Other groups have denied a link between Proposition 47 and crime rates. The University of California, Irvine conducted a study which states that while crime has increased, the law is not a factor. The American Civil Liberties Union has also supported the proposition, arguing that it eases overcrowding of jails and reduces prison spending.

Whether or not Proposition 47 has affected crime rates, Ojeisekhoba warns that bike thefts will not be entirely eliminated, despite law enforcement efforts.

“If I have a way to just say, ‘Boom, no more bike thefts,’ I would love that,” Ojeisekhoba said. “We’re not going to be able to catch every single criminal that comes onto campus… but we can still strive for that. But Campus is still a safe place. I don’t want students to be thinking that their safety is at risk… Yet it still matters to us.”