Eagles earn their fifth PacWest win of the season on Oscar Rubalcava’s goal. 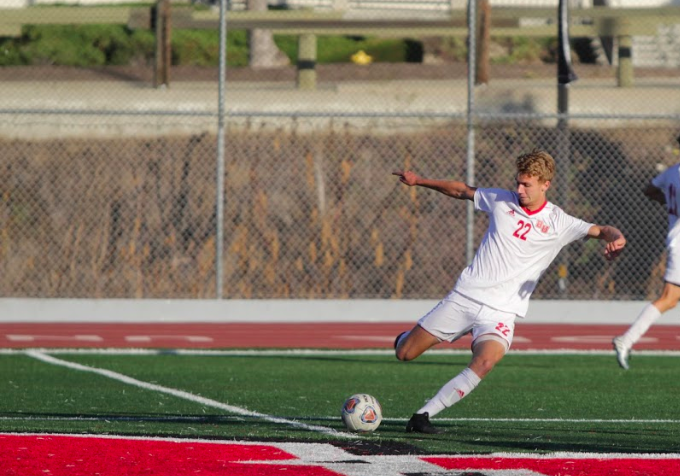 Men’s soccer played in a tough competition against Holy Names University on Thursday. The Eagles and HNU both got a goal in the first half and were tied throughout the second half, forcing overtime. Biola closed out the game with a goal from freshman midfielder Oscar Rubalcava, winning 2-1.

The Eagles struck early by scoring their first goal in the 8th minute. Sophomore forward Atu Galadima got his second goal of the season on an assist by junior midfielder Akhigbe Unuigbe, his first of the year.

Biola took 17 shot attempts throughout the first half. Galadima and Rubalcava contributed with six shot attempts each. Near the end of the period, HNU won a free penalty kick goal after a foul from Biola and tied the game, 1-1.

In the second half, the Eagles looked to score their second goal to break the tie. They took nine shot attempts and four corner kicks. Within the first three minutes of overtime, Rubalcava finally scored the winning goal Biola.

“It was just when I [saw] it hit the back of the net. It was just like, ‘Thank you, that this is finally over,’” Rubalcava said. “It was frustrating just the entire game… but at least we got the winning goal to finish on a good note.”

Head coach Todd Elkins believes his team will finish their season in the middle of the top 10.

“I think the difference going into these last two games as far where we can finish in the standings, is anywhere between fourth and eighth place,” Elkins said. “I think we could be fourth or fifth place.”

The victory moved the Eagles to 5-4-1 in the PacWest conference and 7-8-2 overall. Their final match of the regular season will be at home against Dominican University on Saturday at 4 p.m.