The Candyland tradition enters its second decade, serving over 1,200 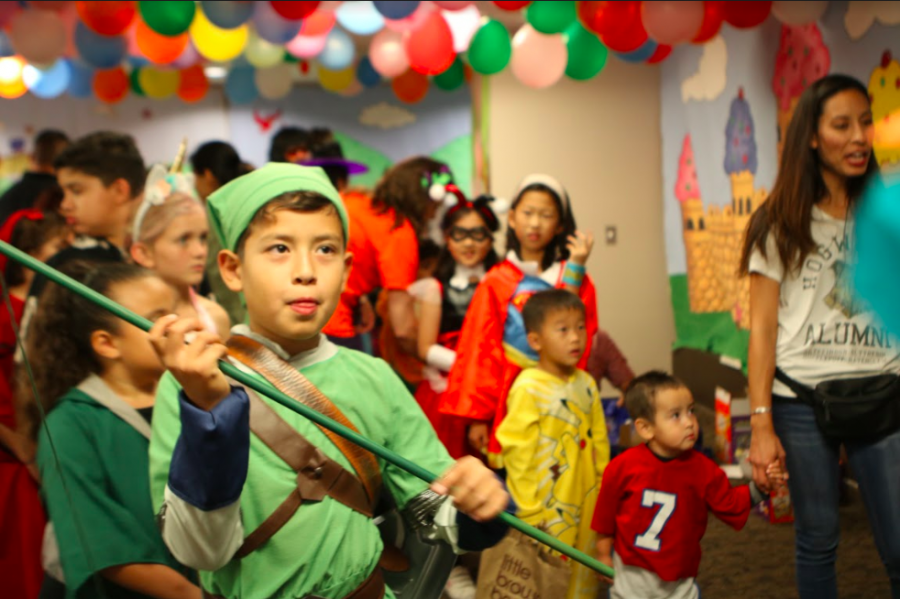 Photo by Amber Chen / THE CHIMES

With the help of several volunteers, a temporarily transformed Alpha Hall welcomed 1200-1300 members of the local community to this year’s Candyland. For the event’s 20th anniversary, families once again chose Biola as a safe and caring option for trick-or-treating.
STEPPING INTO CANDYLAND
This year’s Candyland was once again crowded with children trick-or-treating along the dorm’s halls, enjoying games and jumping around the bounce houses. The event started at 5 p.m. as the Alpha resident advisors welcomed each child with a warm smile and the same exciting phrase, “Happy Halloween!” The RAs wore coordinated 101 Dalmatians costumes and covered their faces with white and black paint. Resident Directors Pie Dyson and Sarah Brown guided parents through the decorated maze.

The residents of each room painted their own door for the event. While most students were focused on schoolwork, the Alpha residents and volunteers spent time and effort to create a warm experience for families on Halloween night.

There were multiple door themes including Disney, Star Wars and Dr. Seuss covering the halls of every floor. The visiting families had opportunities to take memorable photos together in front of a variety of eye-catching posters. Several doors had themes of Disney movies and books that that some parents would tell their kids that they themselves encountered as children. Some parents took the time to read some of the titles and phrases on the doors to their children. One popular book theme among the doors was the children’s classic “Guess How Much I Love You”. The door presented two orange rabbits, similar to the cover of the book, which represented the bond between parent and child.

Trick or treating took place mostly in the halls of each floor. There were various types of chocolates and jellies that many children collected inside their large trick-or-treat bags. Balloons filled the main lobby, which stood as the location for games and activities. Children were able to attend carnival-type games, such as a fishing game and cake-walk. Trick-or-treaters also had the opportunity to have their face painted so they could complete their Halloween costumes. The event also had a Disney-themed bouncy house outside Alpha so that children could have fun jumping around.

As the sun started to set around 7 p.m., families watched the short film “Toy Story of Terror” outside Alpha’s main entrance. The lawn was filled with eight large sofas, allowing families to finally rest and enjoy the animated movie. Joy and laughter filled the air as the event ended at 8 p.m.
EFFORT OVER DIFFERENCE
Rather than bringing in new ideas to the event, many of the games and themes were continuous from past years of Candyland. Some Alpha residents mentioned minor changes to the events and parents noticed some too.

“The costumes had more details this year,” said Erin Lee, a child from La Habra.

Velazquez Rivera, a parent from the La Mirada community, noticed s in the decorations.

“This year I did notice a lot of balloons,” Rivera said.

“The preparation started about a week before the event,” said junior business major Yewon Lee. “Though we sometimes use certain drawings that were already used, 80 percent of the decorations are created during the week.”

Rivera specifically appreciates the effort students pour into the event for the local children.