The Cougars clinched at least a share of the PacWest title with the Cornerstone Cup win. 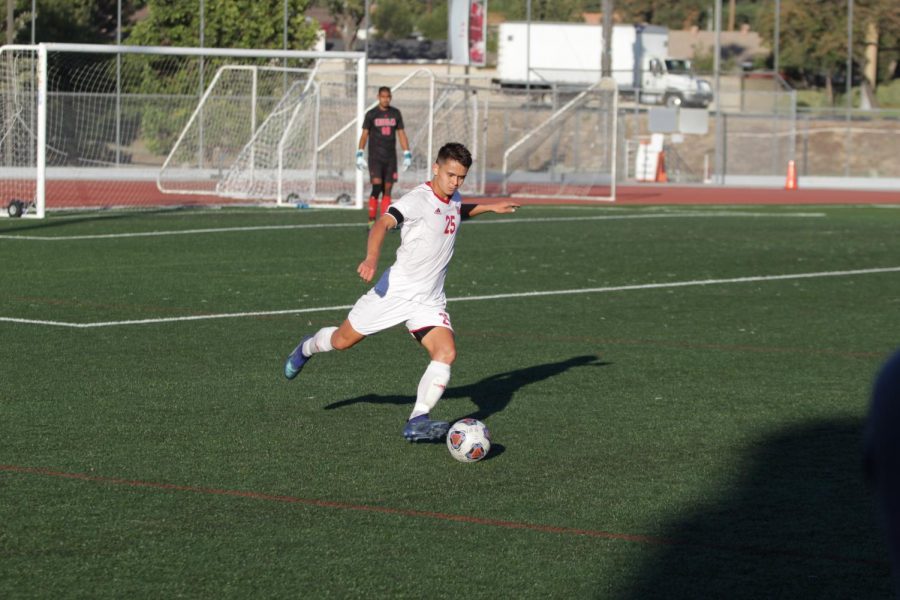 In front of a standing room only crowd at Al Barbour Field Saturday, men’s soccer took the pitch with one goal in mind—to play spoiler against No. 8 Azusa Pacific University.

The Eagles gave a valiant effort with a defense-first approach, holding the archrival Cougars scoreless for the first 77 minutes of the match. But then APU converted its only shot on goal when Cougars midfielder Arturo Astorga found a cross and dribbled it in past Biola junior goalkeeper Luis Contreras with 12:30 left.

The victory means APU has now won all nine of its PacWest contests and clinched at least a tie for the conference championship. Azusa also gained 10 Cornerstone Cup points.

“We defended APU as well if not better than anybody has this year,” said Eagles head coach Todd Elkins. “They have several ways to attack… and players that attack with different strengths.”

The Eagles made a late push in the 80th minute, one of their only offensive attacks of the game. However, that fizzled when APU’s goalie made a leaping one-handed save off a header from redshirt sophomore defender Atu Galadima. Biola got one more chance off an 89th minute throw in, but again the Cougars goalkeeper got to the ball before anyone else could.

The late theatrics wiped out an excellent effort from the Eagles’ defense, particularly the team’s back line, anchored by senior defender Parker Setran and junior defender Jake Munivez.

“Defensively, I couldn’t have asked for more,” Elkins said. “Our back line has gotten better throughout the season. This is Jake’s first year to be a starting center back, Parker’s the only one with starting back experience. [Defender] Henry [Reeves] played 90 minutes back there as a freshman… they played like an experienced back line.”

Elkins went on to praise the Eagles’ entire defense, including players not usually called upon on that side of the field.

“Our midfield worked really hard, our outside wingers had to come back a lot to defend their outside backs,” he said. “There’s no team that has the speed and the power and the finesse, the craftiness that APU has in the attack. And [our] guys did an amazing job [defending].”

APU applied pressure from the start, and it looked like the Cougars would score early when they forced a corner kick in the 12th minute. Biola stepped up, though, clearing that corner and two more that would follow in the 20th minute. Astorga got two shots off, but the Eagles blocked one before it could reach the goal while the other sailed wide.

Biola started attacking more in the second half, and finally got their first shot of the game off in the 53rd minute, when an attempt from junior forward Leo Thompson sailed high. It would prove the Eagles’ only shot in the entire match besides Galadima’s ill-fated header.

“We created a little bit more attack in the second half, which was good,” Elkins said. “The danger there is that [we were] gonna get stretched when [they] start attacking, which we did a little bit.”

The exhausted Eagles (6-8-1, 4-4 in conference) get just one day off before heading south to play Point Loma Nazarene University at 1 p.m. on Monday.