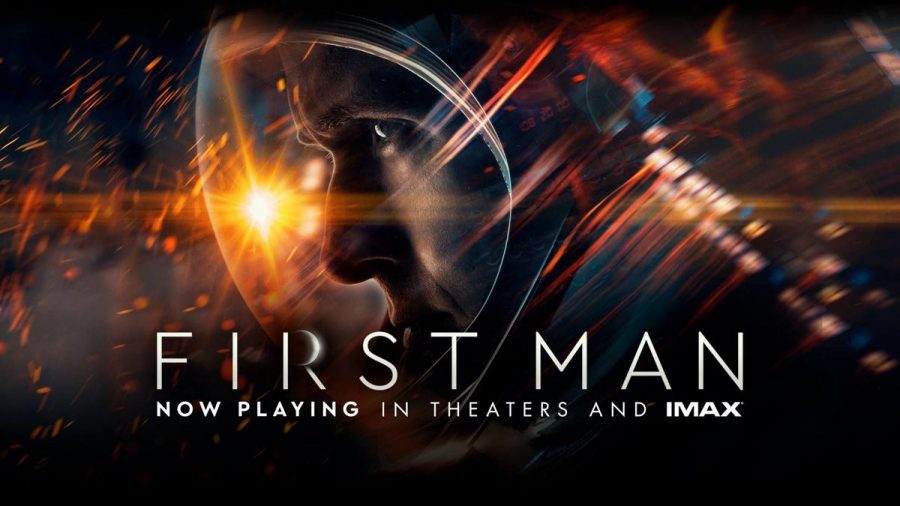 We all know the story of the moon landing. From when it happened in 1969 to the countless depictions since, it is shown as one of the greatest and most celebrated achievements in American history. As history reminds us of the glory, awe and wonder of this moment, Damien Chazelle’s “First Man” unravels a grounded story containing tragedy, perseverance and sacrifice. But from tragedy in that sacrifice comes greatness.
TECHNICALLY BREATHTAKING
The film sets the stage and theme by opening with major tension and death, as Neil Armstrong, portrayed by Ryan Gosling, tests an X-15 rocket. As he hits his targeted altitude the engine turns off, the spacecraft starts bouncing off the atmosphere and cannot re-enter the earth. Neil gets the engine up and running and lands safely but narrowly escapes death. The film then transitions from the action-packed opening to a tender family moment as Armstrong loses his daughter to cancer. The tragic death affects Armstrong so deeply that he leaves his job, joins Project Gemini with NASA, and starts his journey to the moon. The first 20 minutes establish themes of endurance and perseverance with gut-wrenching tension, high stakes and a morbid look into Armstrong’s past. This is an impressive feat because it keeps us on our toes throughout the film, even though we know the ending to the story.

“First Man” is a beautiful technical accomplishment. Chazelle impresses as a visual poet once again through clever cinematography, using three different camera styles to depict different stages of the film. When Armstrong is at home and with his family it is shot like a documentary, almost as if Chazelle was there in the ‘60s, recording the family moments.

Chazelle also uses close-up shaky cam to depict the rocket launch and test scenes. These moments throw you into the astronaut’s experiences in the ship, shaking everything sporadically as things go haywire. It is a visceral experience.

Lastly, Chazelle uses high-def IMAX cameras to film the moon landing sequence from a wide perspective. It is visually stunning and beautiful, presenting one of the most moving scenes in the entire film.
CAPTIVATING EMOTION
One of the most effective parts of the film is the relationship between Neil and his wife Janet, portrayed by Claire Foy. As both their lives are filled with death and tragedy, the two deal with it quite differently. Neil internalizes his grief through a stoic, stripped-down performance from Gosling. It’s an uncommon role for actors, who usually brings lots of energy and emotion to his characters. You always think he will break his stoicism and erupt into a bevy of emotions, but he always remains subdued. Janet, however, is the emotional anchor and voice of reason in the film. Foy portrays her powerfully with intense gravitas, overshadowing every actor she performs alongside. Both actors nail their roles as the two are a stunning dichotomy, portraying the fear of death and uncertainty with depth and emotion. It is captivating.

“First Man” uniquely puts the story of Neil Armstrong first and the moon landing second, which allows the film to show parts of the event that we have never really seen before. With tragedy and sacrifice so front and center, one’s perception of the moon landing will never be the same. Chazelle does it again by making one of the best films of the year. Do not miss this outstandingly visceral film.