A new banner and five-year agreement is put in place for canvas on the parking structure. 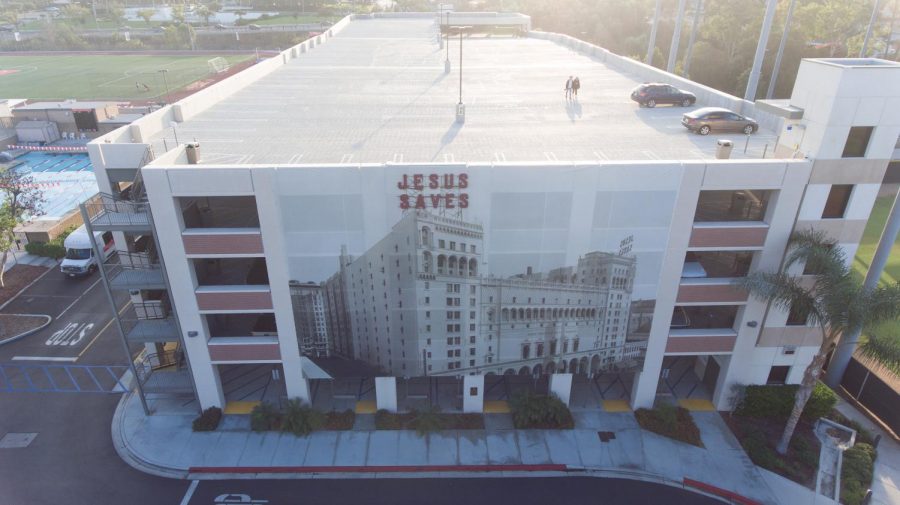 Parking structure S on lower campus is known for hosting the large ‘Jesus Saves’ canvas banner. However, when fierce winds hit last spring, the canvas was torn and partially taken down and only a fragment remained for the duration of the semester.

“It was deteriorating. The banner itself had a life expectancy of about five years,” said senior director of facilities management Brian Phillips. “It was very worn and brittle, but we also had a high wind event that caused it to tear pretty significantly so we went ahead and just removed it after a section ripped.”

Facilities management had an agreement with the city of La Mirada to keep the banner up for five years. At the end of the five-year period, the plan had to be re-submitted to city planning for approval. The timing of the rip occurred toward the end of the agreement. However, because of delays in getting all the permits in place with the city, the new banner did not go up until the summer.

A small section of the banner was left up on the structure that was behind the LED ‘Jesus Saves’ letters. Phillips explained this section was left up in order to be efficient and save money as opposed to removing the letters to only later have them installed with the new banner. Those lights remain the same from the the previous canvas along with the spotlights that illuminate the sign.

Facilities and the University Communications and Marketing partnered together during this project to come up with the best possible solution for the replacement banner. UCM business system analyst Jack Wingard said in an email that he talked with two outside vendors for the project in order to find the best possible price. It was paid for by a request from the departments to the university’s emergency fund.

“We determined that the material quality wasn’t the problem that led to the old banner’s coming down, but instead it failed due to a combination of old age weakening and a storm that brought severe gusts of wind through the parking garage,” Wingard said. “Thicker material would have cost much more, and wouldn’t be guaranteed to perform any better.”

The banner will remain in place until five years from now when the plan is up, then it will be reevaluated to decide if the plan should be renewed.