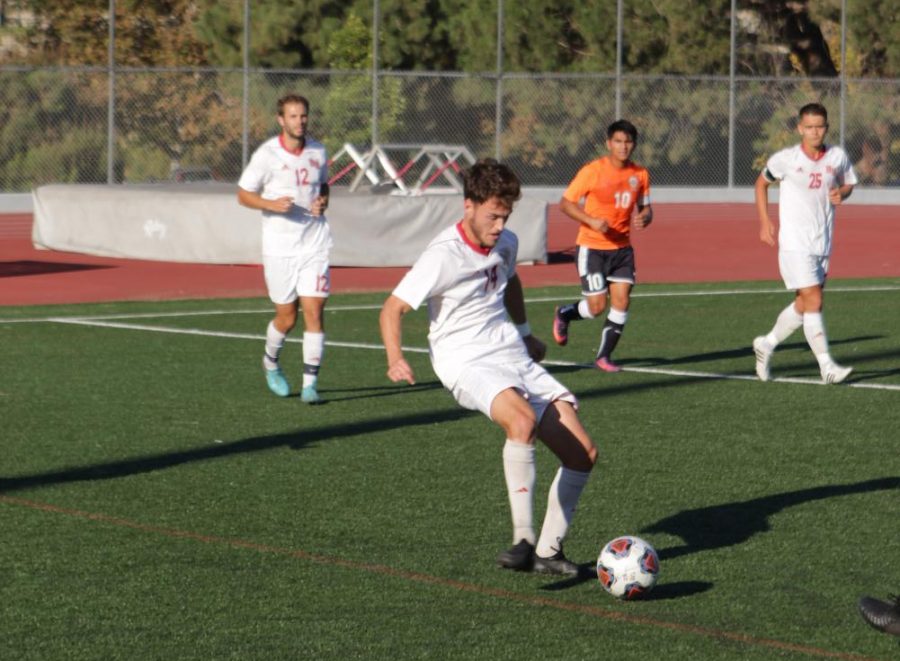 Men’s soccer flew back to the Eagles’ nest from Hawaii to play a PacWest matchup against the Fresno Pacific University Sunbirds on Saturday. The Eagles battled in a close game but lost on a goal from the Sunbirds at the buzzer, ending the match with a final score of 2-1.

The Eagles started off strong in the first half with four shot attempts on the goal. At 29:24, the Sunbirds earned a penalty kick and won a goal after a foul on the Eagles for committing handball. After this, the Eagles struggled on defense with several more calls on fouls.

In the second half, the Eagles came out on fire with 10 shot attempts and four corner kicks. At 75:03, the Eagles earned a penalty kick after a foul on the Sunbirds. Sophomore midfielder Atu Galadima won the penalty kick goal and tied the game at 1-1 with his first goal of the season.

“I haven’t scored this season, which is a little bit of a disappointment because I feel like I should be contributing more to my team,” Galadima said. “I was able to make the effort because it was a team goal at the end of the day.”

Many Eagles contributed to the team, with freshman midfielder Oscar Rubalcava and Galadima each attempting four shots on goal. Senior goalkeeper Luis Rodriguez collected three saves in the second half.

Head coach Todd Elkins believes the team is ready for the rivalry game against Azusa Pacific University next Saturday.

“We can’t lose any more games, so Azusa, it’s a must win game. It’s a home game so I’m confident in what we can do here at home, even though Azusa is in first place,” Elkins said. “If we can deal with their best attack like we did today against Fresno’s, we clean up the kind of awkward plays that happened today… there’s no reason why we can’t win that game.”

The loss moved the Eagles to 4-3-0 in the PacWest and 6-7-1 overall. They will take on APU at home on Saturday at 4 p.m. in a Cornerstone Cup matchup.