Volleyball’s weirdest streak is for the birds 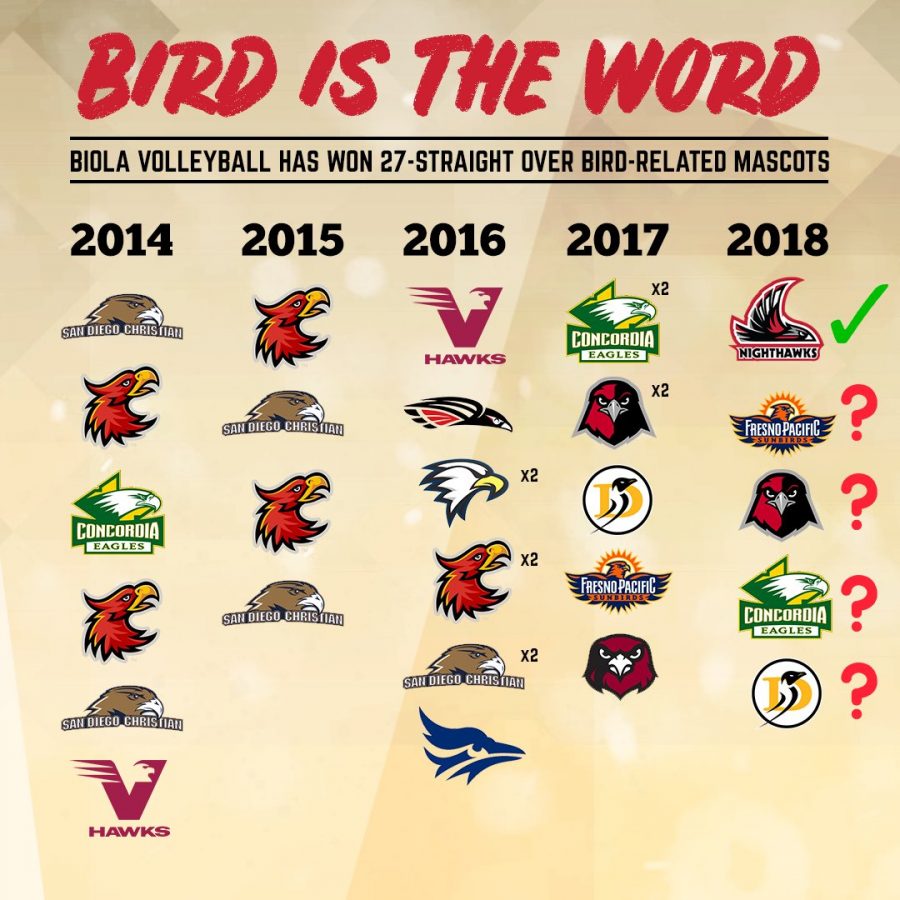 A graphic from Aug. 25 celebrating Biola Volleyball's 27th straight win over an opponent with a bird mascot. The win streak is now up to 32 as of Oct. 20, 2018.

Neil Morgan does not remember the exact moment when he discovered what is almost certainly the most unorthadox streak in Biola Athletics history. He does, however, remember what led to the find.

Biola volleyball was playing in the National Association of Intercollegiate Athletics national tournament in late 2016, and had just beaten the Tabor College Blue Jays to advance to the round of 16. As the Eagles celebrated their come-from-behind win, Morgan got to work, like he had after hundreds of games as the athletic department’s sports information director. As he sat in his hotel room in Sioux City, Iowa, where the tournament was held, he noticed something.

“It popped into my head, ‘Man, we’ve been beating a lot of bird [mascot] teams recently, and we’re a bird ourself,’” said Morgan, whose official title is assistant athletic director for communications and game management.

With the game recap posted and nothing else to do, Morgan started going back through the Eagles’ schedule from the past season to see how many other bird teams they had defeated. Surprisingly, he found that the Eagles had beaten every other school with a bird mascot that they had faced in 2016, so he decided to look back even further.

The last time volleyball lost to a school with a bird mascot was on Sept. 20, 2014, when the Eagles fell three sets to two against Concordia University Irvine, whose mascot is also the Eagles. The streak began three days later with a sweep of the San Diego Christian College Hawks. It has now survived parts of five seasons, four postseasons, 32 matches against 11 different opponents and a department-wide transition to the NCAA.

Biola’s rivalry against nearby CUI best illustrates how long the streak has endured. When Concordia last beat Biola in volleyball, both Eagles were part of the NAIA’s Golden State Athletic Conference. CUI left for the NCAA and the PacWest conference the following season.

When Biola joined the PacWest in 2017, the volleyball team earned its first conference win over—you guessed it—Concordia. Biola then beat CUI later that season and again on Sept. 26 of this year to help keep the streak alive.

“IT’S SOMETHING I’M ALWAYS LOOKING AT”

Even though head coach Aaron Seltzer understandably cares little about the streak, Morgan and some of the volleyball players get plenty of jokes out of what the assistant AD calls “a fun narrative around a really good program.”

“That night when I came across it, I texted [current senior] Karly [Dantuma] and maybe a couple of the other girls on the team and was like, ‘Not sure if you guys know this—in fact, I’m sure you don’t, but we have this awesome, super coincidental and insignificant streak going on!’” Morgan recalled, chuckling.

Morgan still keeps an eye on the streak, even as Seltzer’s squad has risen to first place in the PacWest standings. For instance, Morgan said he got a “major fright” when the Dominican University Penguins nearly upset the Eagles on Oct. 5.

“It’s something I’m always looking at and thinking about just because it’s fun,” Morgan said.

The Eagles will attempt to up the streak to 33 against—who else—Concordia University Irvine on Saturday.