Eagles win tough match to go 3-0 in Hawaii after four-set win over Hilo. 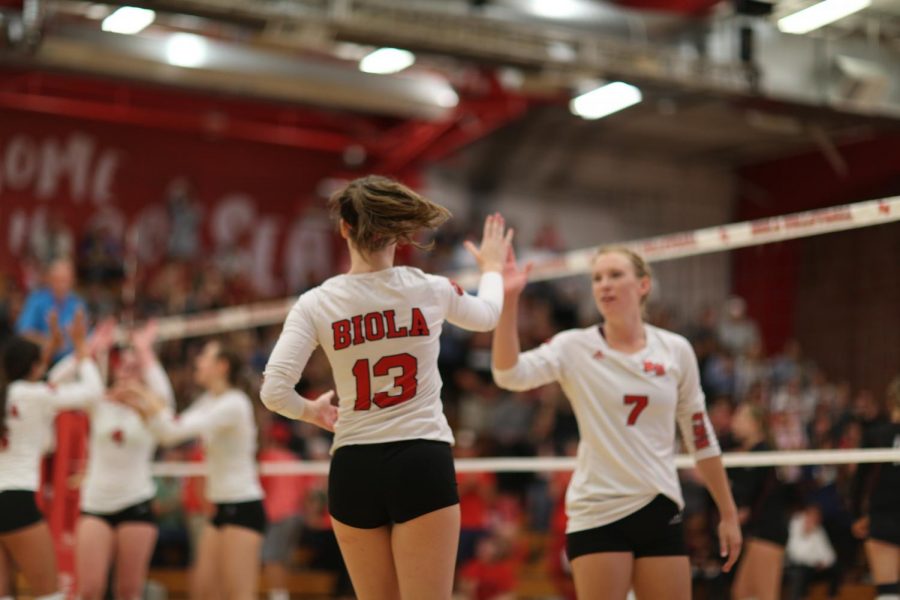 Junior libero Kaitlin O'Brien subs in for senior opposite hitter Karly Dantuma in this file photo from Oct. 3, 2018.

Biola played their third and final game of their Hawaii trip Friday night, taking on Hawaii Hilo University in a PacWest matchup. The Eagles, led by strong overall team play, battled their way to a four-set victory against the Vulcans.

A strong Hilo team jumped ahead 10-6 early, but Biola continued to fight, pulling within one at 21-20 on a smash from junior outside hitter Sabrina Winslow. Redshirt sophomore Christina DenBoer tied the set at 24 apiece late, but consecutive kills from the Vulcans gave them the first set 26-24.

Biola started much stronger in the second set, pulling ahead 12-10 on another DenBoer kill. A strong push put the Eagles ahead 18-13, led by two kills from senior middle blocker Sierra Bauder. The Vulcans clawed their way back to within 23-19, but several errors from Hilo allowed Biola to knot the match up at 1-1 with a 25-19 set win.

The Eagles’ block showed itself in the third set especially, as they took a 14-9 lead on a combo block from Bauder and senior opposite hitter Karly Dantuma. Hilo stayed in the set until the end, tying it at 24 apiece late, but back-to-back kills from DenBoer and Dantuma put the set away 26-24.

A determined Biola team continued to push the block in the fourth set, as another block, this time from Winslow and sophomore middle blocker Bekah Roth, gave the Eagles a 15-10 lead. DenBoer widened the lead to 22-14 on a kill, and another Vulcans hitting error closed out the match 25-19.

DenBoer led the offense with 18 kills, followed by 13 from Dantuma. The two middle blockers for the Eagles dominated at the net as Bauder and Roth tallied seven and six blocks respectively. Senior setter Brinley Beresford recorded 23 assists while sophomore setter Vanessa Garcia put up 18. Sophomore libero Sami Hover led the back row with 21 digs.