Eagles start their Hawaii trip on a high note in epic battle. 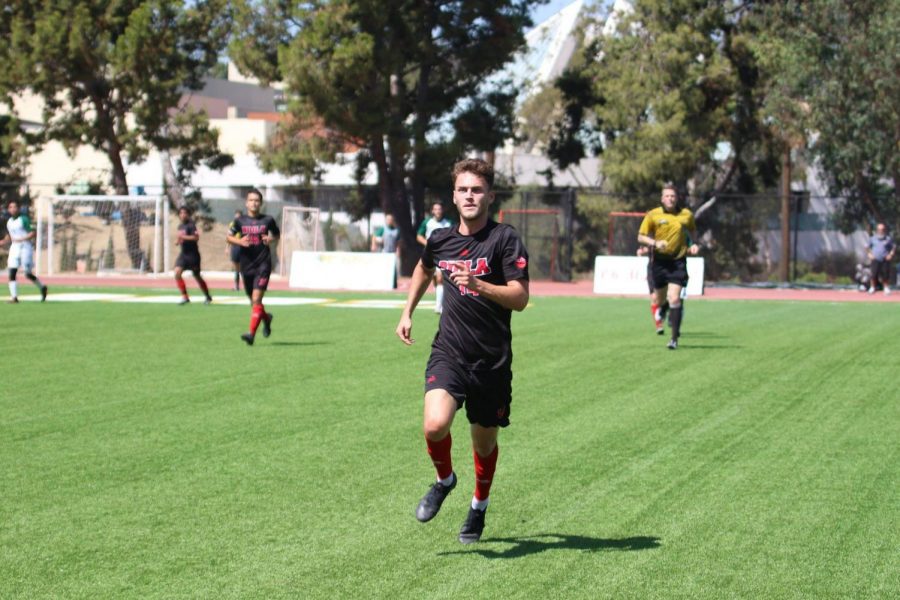 Sophomore forward Jack Cybulski, seen here in a file photo, gave the Eagles a 1-0 win over Hawaii Pacific on Oct. 11 with his goal in the 59th minute.

Men’s soccer kicked off the first of three games in Hawaii with a tough battle against PacWest opponent Hawaii Pacific University. Towards the end of a long game full of shot attempts on goal for both teams, the Eagles pushed through a goal in the second half to earn the 1-0 win.

The Eagles focused on defense in the first half, but struggled on offense. HPU, though, put on a powerful offensive display, taking 11 shot attempts and four corner kicks on the goal.

Senior goalkeeper Luis Rodriguez stopped the Sharks from scoring by picking up an incredible seven saves in the first half alone. The Eagles took a total of two corner kicks on goal and three shot attempts.

Junior forward Leo Thompson contributed to this with a personal high of two shot attempts in the game. Both Biola and HPU fought till the end of the half with no goal from both sides.

Biola came into the second half looking for a goal and finally got one in the 59th minute. Sophomore forward Jack Cybulski grabbed his first goal of the season and the only goal of the night after a rebound from an attempted shot by junior defender Jake Munivez. Munivez was credited with an assist on the goal.

The Eagles attempted to push home an insurance goal with four more shots before the final whistle, but had to settle for Cybulski’s lone score. The night ended with a 1-0 win for the Eagles.

The win moved the Eagles to 3-1-0 in conference and 5-5-1 overall. They will continue their tour in Hawaii against Chaminade University in Honolulu on Oct. 13 at 3 p.m. pacific time.