Freshmen stand out as swim plunges into post-Tixier era

Several newcomers to the Eagles excelled in their first collegiate meet. 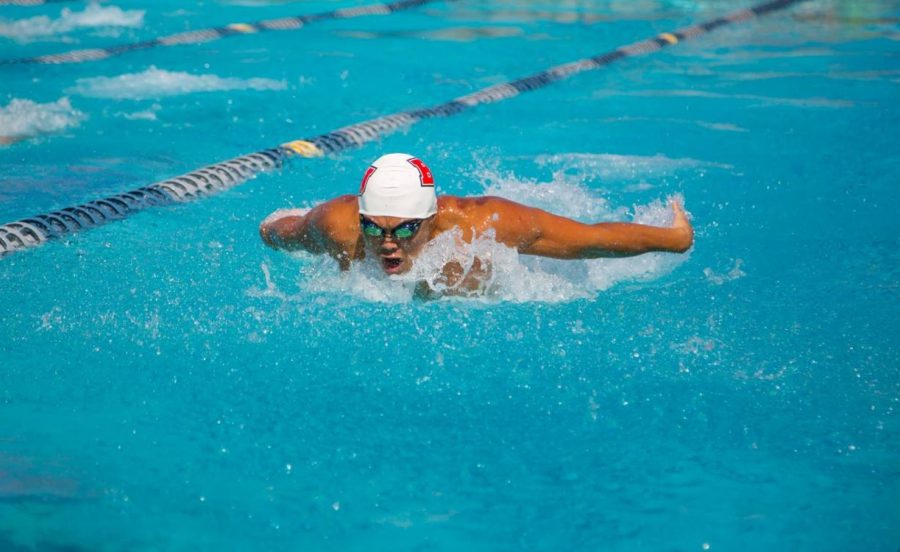 The storyline behind Biola’s swim program entering the 2018-19 season was twofold. How would the Eagles step up after the graduation of Lisa Tixier, arguably the greatest swimmer in school history, and how would second-year head coach Ryan Kauth’s first recruiting class perform? If the Pacific Collegiate Swim and Dive Conference events on Friday and Saturday were any indication, the Eagles will be just fine going forward.

“It’s never gonna be easy to lose a superstar like Lisa Tixier,” Kauth said. “But I think based off of who we have coming in and who we have returning, we’re a much, much deeper team.”

Several freshmen stepped up during their first taste of college competition, notching several top-five finishes and personal lifetime bests over both days. Their performance impressed several of their upperclassmen teammates, including senior Noah Reed.

“It’s really cool to see a lot of my freshmen teammates get up and go, and go super fast… improve our speed as a team as a whole,” Reed said.
ROOKIES REV UP RELAYS
The newcomers made their presence felt immediately, as every single top-two finish the Eagles recorded in Friday’s relay invitational featured at least one and often multiple freshmen.

The men added two more victories in the four-person relays. Holmes and senior Eric Nimmo bookended impressive performances from freshmen Caleb Stupin and Westin Dawe to notch a winning 4:31.72 time in the 50, 100, 150, 200 freestyle relay. Roe, Villa, Kam and Dawe then teamed up for the Eagles’ narrowest victory of the day in the 400-yard medley relay. The Eagles’ 3:42.30 time just beat out Concordia University Irvine’s 3:42.49 mark for first place.

“First college meet is really a lot to deal with, and [the freshmen] handled it beautifully,” Kauth said. “It’s a large group so you never really know what you’re gonna get… and they just rose to the occasion.”
SILZEL, KAM LEAD INDIVIDUAL PERFORMANCES
The women’s side Friday followed a similar pattern. Their lone event win of the day came in the 300-meter breaststroke as freshman Celine Dong, senior Jenny London and junior Emily Silzel combined for a time of 3:32.05, beating Cal State East Bay by less than half a second. Their other top-two finish came in the women’s 200-yard freestyle relay as freshman Annie Bristow combined with three upperclassmen stalwarts—Silzel, junior Rachael Stinchcomb and senior Rebecca Brandt—to edge out third place CUI.

“Of course we have our top swimmers—Stinchcomb, Silzel, our seniors—it’s just that we look even better than we arguably should right now with the training that we’re doing,” Kauth said.

Villa and Owens combined for three more top 10 finishes, and finished ninth and 10th respectively in the men’s 200-yard freestyle, capping a strong weekend for Kauth’s freshmen across the board.

“What I think stood out to me the most is their competitive edge,” Kauth said about his newcomers. “They way they stepped up to the blocks, the way they approached every race… They’re relentless. They just go after it.”

The Eagles get a couple weeks to rest and train before a a triple-distance meet at Whittier College on Oct. 20.