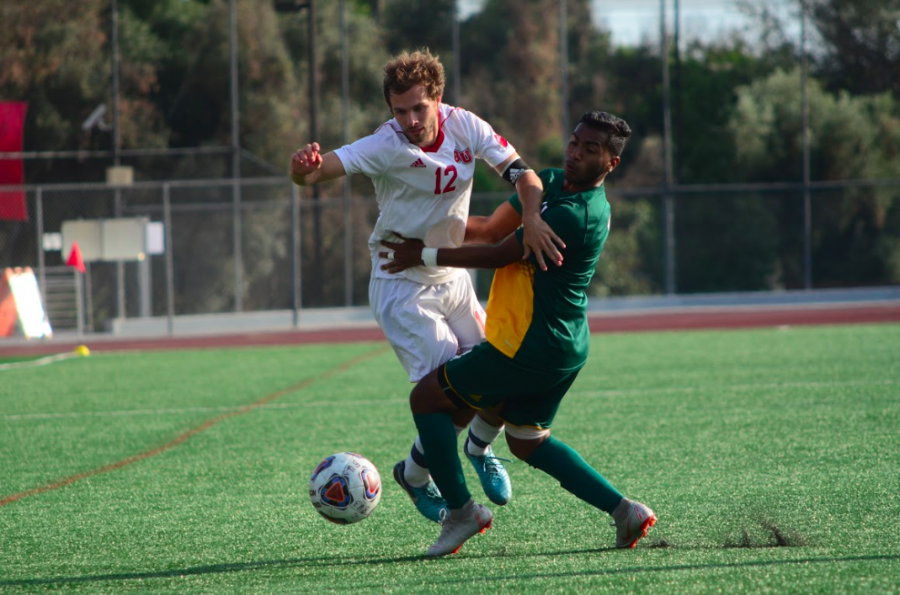 Men’s soccer won a tough matchup against PacWest foe Concordia University Irvine at Al Barbour field on Saturday. The Eagles of Concordia fought to break a tie, causing the game to go into double overtime. Biola ended the game on a strike from junior forward Leo Thompson at the 38-second mark in the second overtime period for his second goal of the game, moving the final score to 2-1.

The Eagles grabbed their first point less than a minute into the first half of the game. Thompson shot a goal off a pass from senior midfielder Kousei Mattox, marking the captain’s third assist of the season. CUI tied the game after collecting a loose ball and scoring at the 30 minute mark of the first period.

Biola worked hard to break the tie, taking six shot attempts in the second half. After failing to score the winner in the first overtime period, the Eagles finally broke through in the second period of overtime to seal the win.

Biola took nine passes and kicked to Thompson who scored his sixth goal of the season, giving the home team the victory.

“I was actually trying to find [Mattox] and I saw that he was making a run. Luckily I got the ball and eventually got a point,” Thompson said. “My goal was to work with the team and find more chances to make a goal.”

Head coach Todd Elkins explained that the Eagles worked hard in practice for the game.

“Anything can happen in overtime, just a half chance turns into a goal,” Elkins said. “I’m proud of the effort these guys put in. They worked extremely hard this week in preparation for this game.”

The victory moved the Eagles to 2-1 in the PacWest and 4-5-1 overall. They will continue play at Hawaii Pacific University on Thursday at 3:30 p.m. pacific time.